In A Year Without Parades, Mardi Gras In New Orleans Is All About House Floats 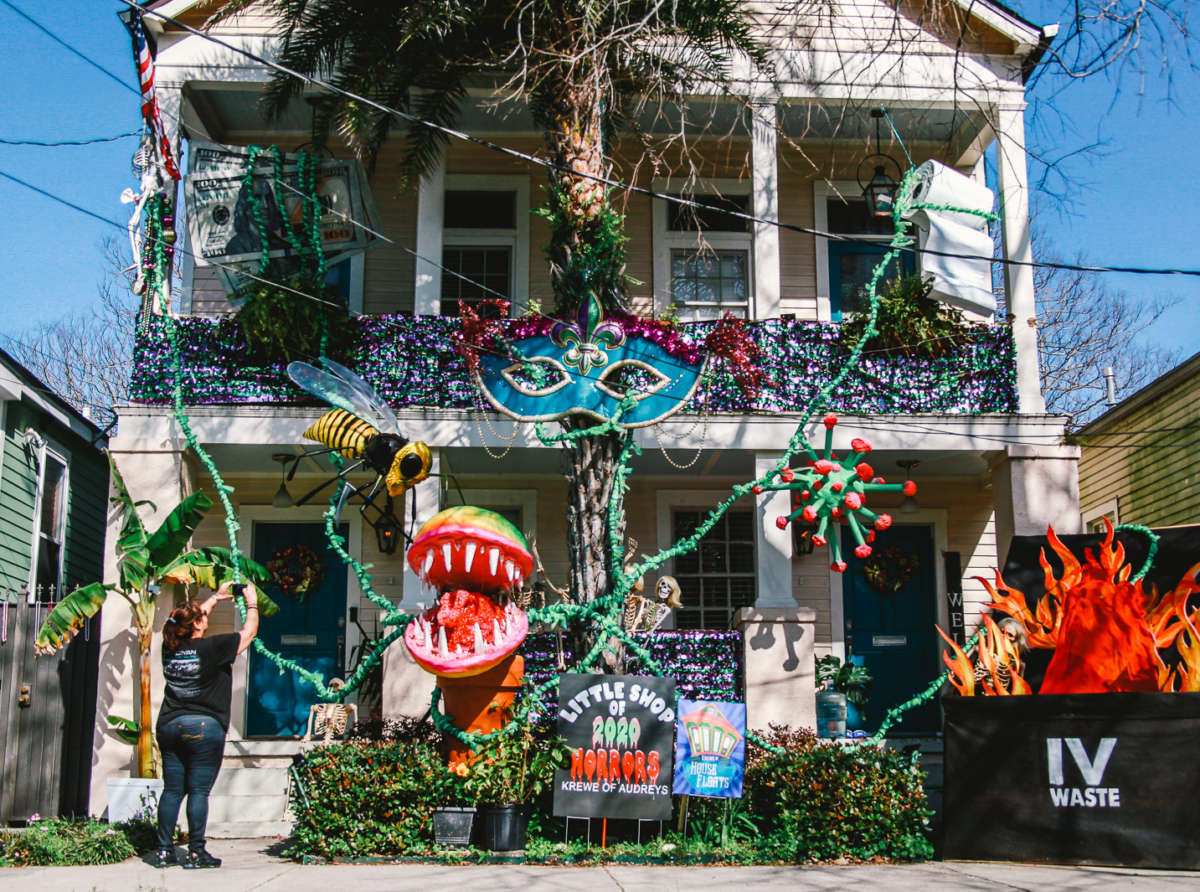 Just because the Mardi Gras parades are canceled, it hasn't stopped people's creativity. The "Little Shop of 2020 Horrors" house float is in the Algiers Point neighborhood of New Orleans.
Image credit: Phoebe Jones

When Crissy Whalin and her 12-year-old son, Zephyr Cooke, settled in the New Orleans neighborhood of Algiers Point in 2020, the last thing they expected was a front-row seat to the city’s Mardi Gras comeback.

Their neighborhood has emerged as a house float hotbed in recent weeks. There are more than 140 decorated homes within walking distance and thousands more a short drive away.

“I’m from California, where we would just be complaining,” Whalin said. “People in New Orleans know how to take the crap and make something great with it.”

The house floats movement was born on Nov. 17, 2020, the same day the city announced there would be no parades during the upcoming Carnival season due to the coronavirus.

“Last year I made a bunch of origami flowers that kiddo and I passed out to people while we wandered around the French Quarter. Tempted to continue the theme, turn the whole house into a flower float and pass out flowers to the neighbors while I drink all day.”

Boudreaux lives in Algiers Point too and invited her neighbors to decorate their homes as well. Fast forward eleven weeks and she’s now founder and captain of the city’s newest and fastest-growing krewe — the Krewe of House Floats.

There are now more than 3,000 house floats, according to the krewe’s map. While the vast majority are in the greater New Orleans area, Mardi Gras enthusiasts have created floats in at least 40 states.

The house float movement has given birth to a mini economy, putting laid-off musicians and artists back to work, saving businesses and fundraising for New Orleanians in need.

“I’ve gotten messages from artists and businesses who said, ‘We didn’t know how we were going to get through this year,” Boudreaux said. “The fact that house floats exist, they’re keeping the Mardi Gras economy afloat.”

Boudreaux’s home, dubbed the USS House Float, sports nautical flags, life preservers and an oversized ship wheel. From her front porch you can hear wind chimes and a ferry blowing its horn as it makes its way across the Mississippi River.

On a recent Sunday, the day before the krewe’s map was set to launch, many of Boudreaux’s neighbors were busy completing their floats.

One woman attempted to reattach the arms of a life-size LEGO mannequin torn off by the wind, while children sprawled in the sun, painting cardboard cutouts to resemble cartoonish tiki torches and colorful fish.

Whalin and Zephyr decorated their home too. It’s modeled after the board game Candyland, complete with inflatable gummy bears, homemade game pieces, and ice cream balloons.

“It’s a play on board games because we’re bored at home,” Whalin said. The house float’s official name is Covidland.

As krewe captain, Boudreaux said her top priority is safety. There are no large gatherings or official tours sponsored by the Krewe of House Floats. Instead, locals are encouraged to visit house floats on their own time, either by car or on foot.

She’s called out articles marketing the house floats movement as a tourist attraction and put together a virtual tour for out-of-towners.

“The pandemic is raging throughout the whole country. It would be irresponsible of us to say, ‘Yeah, please come visit New Orleans,'” Boudreaux said. “We want people to be safe.”

For weeks Mayor LaToya Cantrell and other officials have invited tourists to visit for Mardi Gras, as long as they adhere to local restrictions.

Large gatherings in the French Quarter at the end of January led to internet outrage. In response, the city announced new restrictions, including city-wide bar closures not just on Fat Tuesday, but for the four days prior. In the Quarter, the sale of packaged liquor is also banned.

High traffic areas, including Bourbon Street, Frenchmen Street and Decatur Street are closed to vehicles and pedestrians from 7 p.m. until 3 a.m. The Claiborne Corridor, a more local gathering place, is also fenced off.

Between labor and supplies, a custom design can cost thousands of dollars. The new industry has created a lifeline for local artists, like Coco Darrow.

Darrow and her husband own The Stronghold Studios, a commercial art company. They normally create hand painted props and backdrops for concert tours and movies.

The pandemic eviscerated their business last year when they completed only a single paid project.

“I actually thought that it might be a good way to make a little extra money to help cushion the cost of closing the business down and as time went on I thought maybe we won’t have to close,” Darrow said.

In two months, they’ve crafted more than two dozen house floats and their team of two has grown to nine.

Devin De Wulf is founder of the Krewe of Red Beans, a Mardi Gras group that’s been fundraising for locals throughout the pandemic.

While some of the floats have been commissioned by businesses, others have been raffled off, like a tiny house float in the city’s 7th Ward.

De Wulf said while the spirit of the season can be difficult to grasp, it’s often found in the unexpected.

“You know the magic of Mardi Gras is ephemeral and it comes and it goes, but in that moment when you’re there, it’s just pure bliss, it’s pure joy.”

This year, house floats have brought that magic back.