In A Los Angeles Suburb, The Hunt Is On For An Albino Cobra 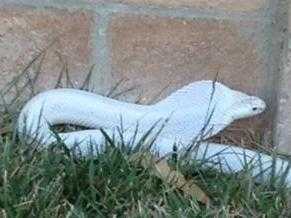 Authorities are hunting for this albino cobra in a Los Angeles suburb.

A pretty terrifying drama is unfolding in the Los Angeles suburb of Thousand Oaks: An albino cobra is on the loose and authorities say it may have already bitten a dog.

“‘It’s a little unnerving,’ said Thousand Oaks resident Arianne Deeder, 39, who lives in the neighborhood. ‘I’m keeping an eye out.’

“Deeder has chickens in a back yard coup and fish in a pond, along with a dog and a cat. She said she kept the animals safe by locking the coup, putting a fence over the pond and keeping her dog and cat indoors.

“On Wednesday evening, seven animal control officers were walking through the neighborhood, searching horse stalls and yards for the elusive white snake.”

The Los Angeles County Animal Care and Control issued an alert on Wednesday. It asked parents to watch their children closely and to tell them to avoid any snakes.

“The monocled cobra is capable of being active at any time of day, however it is most active during the morning or evening hours when it is cooler,” the center said. “As with any snake, it will strike if cornered.”

“Cobras are illegal as pets in California except for educational and scientific purposes, and a permit is required. The monocled cobra, common in Southeast Asia and parts of India and China, can grow to more than 4 feet long. It takes its name from the ring or circle design on the back of its hood — although this albino animal is pure white.

“The snake was most likely bred in captivity because its color would make it vulnerable to hawks and other predators in the wild, Greg Pauly, curator of herpetology at the county’s Natural History Museum, told The Associated Press.

“Jay Brewer, who owns the Reptile Zoo in Fountain Valley, said he didn’t understand why someone would own the cobra or keep one in their home.Where they’re permitted, cobras are typically kept in double-locked cages or in a highly-secured, specially outfitted room.”