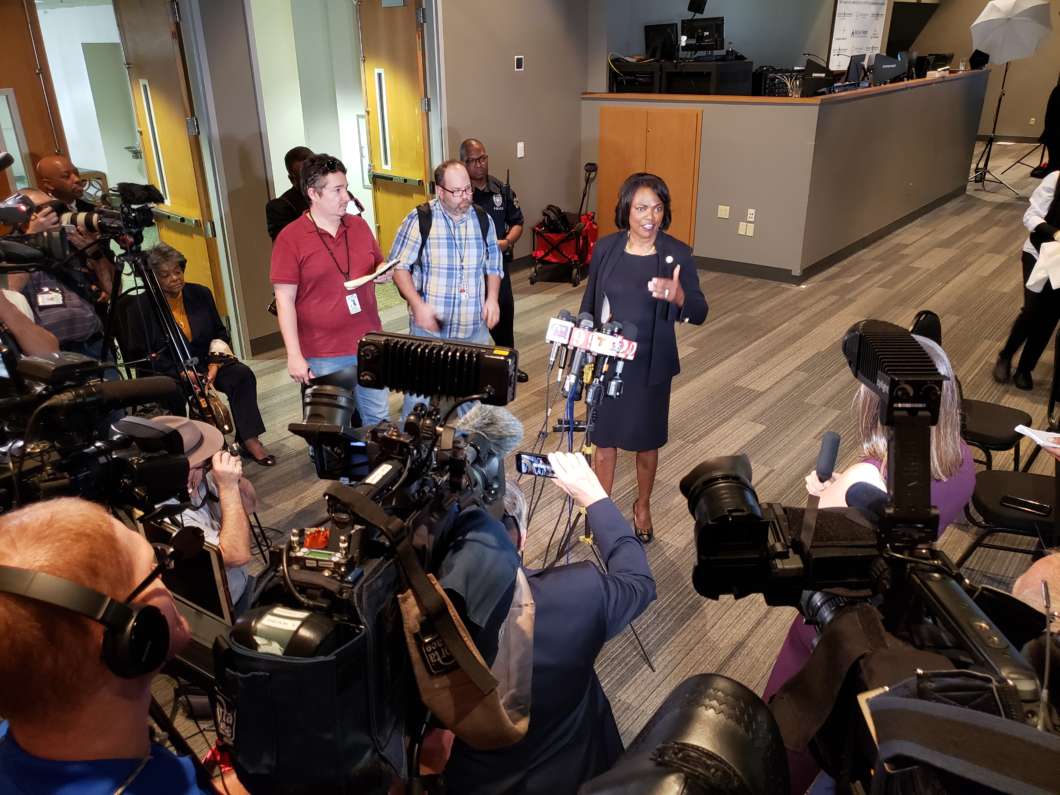 US Rep. Val Demings talks to reporters in Orlando ahead of the impeachment trial of President Donald Trump. Photo: Matthew Peddie, WMFE

Long before being picked as one of seven managers in the impeachment trial of President Donald Trump, Congresswoman Val Demings was known as Orlando’s first female police chief, the youngest of seven children, and part of the city’s most powerful political couples.

Demings, 62, is the only non-lawyer with a spot on the impeachment prosecution team. But she said her life that includes 27 years in law enforcement, has prepared her for this historic role.

The Democrat has walked much of that path with her husband of more than 30 years, Orange County Mayor Jerry Demings. Together, the couple has broken barriers and risen through the ranks in law enforcement and politics.

Last year, they shared their stories in a conversation recorded by StoryCorps. Demings talked about being the youngest sibling of seven, growing up in a two-bedroom house in rural Jacksonville.

“But you know, Jerry, I grew up extremely poor, but at the time we really didn’t know how poor we were,” she said.

Demings says she couldn’t remember a day her father didn’t go to work: as a gardener, a janitor, picking oranges; whatever work he could find to put food on the table.

“My parents just really worked hard to make sure that we had as much as we could,” she said, “and when I look back now I know they sacrificed a lot.”

Demings admits to being competitive as a kid: she was on the track team, she played in band and sang in chorus. And she told the Orlando Sentinel in an interview in 2007 that she got bitten by the police bug early. As a sixth-grader, she was picked for school patrol — helping classmates cross the road — and helping break up fights on the school bus on the way home.

And, as the first in her family to go to college, Demings said she felt obligated to give back.

“Like you, Jerry, to have the opportunity to work my way through the ranks, and to be appointed the chief of police, the first woman, was an honor, and I took my job very, very seriously, as I do my current job as a member of Congress,” she told StoryCorps. “It’s all about trying to save the world.”

And Orlando trial attorney Mark Nejame says even though they were sometimes adversaries in the courtroom, Demings gained his respect and friendship.

“It’s just been watching that journey continue,” he said. “She advanced, she didn’t step over people either. She worked hard and deserved everything she got.”

Republican political analyst Frank Torres said Demings’ leadership as chief was on display during a shooting at a downtown Orlando office in 2009 that brought the city to a standstill.

“And I think you saw her really step up there during that situation, to sort of work with elected officials, to both take down the threat and to keep people calm, during a very nervous time,” he said.

When Demings retired from the police force in 2011, Torres said the logical next step was a career in politics.

“As soon as she left the job, she was immediately being rumored for office,” he said.

Val Demings was elected to Congress in 2016. Credit: U.S. House of Representatives

After a few unsuccessful bids for office, Demings was elected to Congress in 2016. Since, her political stature has grown. She currently serves on the U.S. House Committees on Intelligence, the Judiciary and Homeland Security.

“Notwithstanding how the trial comes out, she is recorded in perpetuity in the history books as playing a very key role, only after being in the Congress a very short period of time, but earning her stripes, as it were, in very short order,” Batchelor said.

As for the future, Demings’ name has already been floated as a potential vice presidential candidate in 2020. But when asked about that by reporters, she had this to say:

Listen to the Demings’ episode of the StoryCorps: Orlando podcast produced by WMFE.

This story is part of the I-4 Votes project, a collaboration between the NPR stations in Tampa and Orlando. The project will spend 2020 focusing on the issues that matter to voters as they decide who they want to be president of the United States.