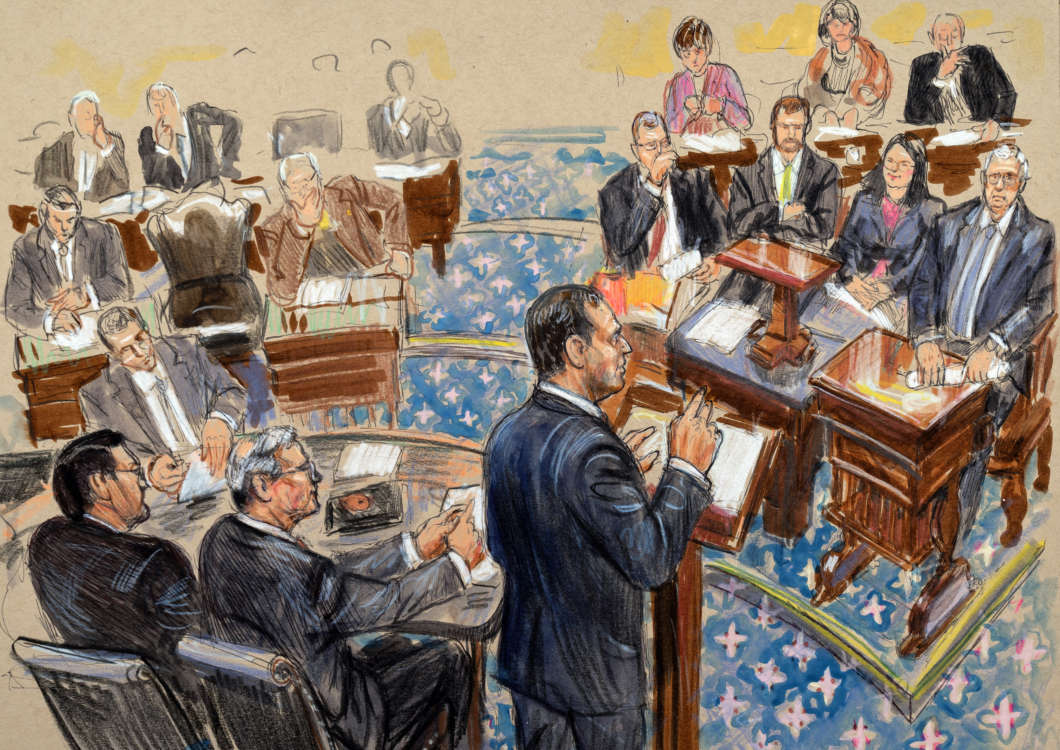 An artist sketch depicts impeachment manager Rep. Adam Schiff, D-Calif., presenting an argument in the impeachment trial of President Trump in the Senate chamber on Wednesday. Schiff and the other managers will continue their opening arguments on Thursday.

House impeachment managers will resume their prosecution of President Trump in the Senate on Thursday and are expected to outline how the law applies to what they see as the president’s “corrupt scheme” with Ukraine to tilt the 2020 election in his favor.

It follows a day of presentations and argument in which Democratic impeachment managers implored skeptical Republicans to buck their party’s leadership and vote to remove the president for abusing the power of his office and obstructing Congress.

“The president’s misconduct cannot be decided at the ballot box, for we cannot be assured that the vote will be fairly won,” said Rep. Adam Schiff, D-Calif., who is leading the prosecution of the president.

“In corruptly using his office to gain a political advantage and abusing the powers of that office in such a way to jeopardize our national security and the integrity of our elections, in obstructing the investigation into his own wrongdoing, the president has shown that he believes that he’s above the law and scornful of constraint,” Schiff said.

Trump’s defense team will have its turn to counter Democratic arguments and make a case for the president’s acquittal when the prosecution is finished. If Democrats take up all of their allotted time, that would mean House managers would wrap up Friday and the president’s defense lawyers would mount a defense this weekend.

Speaking Wednesday from Davos, Switzerland, Trump called the Democrats leading his prosecution “sleazebags” and “very, very dishonest people,” and he dismissed the case built against him as “a hoax.”

“I think it’s so bad for the country,” Trump said, adding: “I’d love to go to the trial, sit in the front row and stare at their corrupt faces.”

Later, Jay Sekulow, Trump’s private attorney and part of the impeachment defense team, bristled at the idea of Trump pulling off such a stunt.

“His counsel might recommend against that,” he said with a laugh.

Watch the proceedings live when they begin at 1 p.m. ET.

The trial centers on Trump’s dealings with Ukraine. In particular, House prosecutors say the president dangled $391 million in congressionally approved security assistance needed to counter Russian aggression as a way to get Kyiv to announce an investigation into the Bidens. Such an announcement, House Democrats say, would politically benefit Trump’s reelection prospects.

Hints of the scheme, Schiff argues, were apparent in the now-familiar July 25 call between Trump and the Ukrainian president.

“Witness testimony, text messages, emails, and the call record itself confirm a corrupt quid pro quo for the White House meeting, an official act, available only to the president of the United States,” Schiff told senators on Wednesday. “President Trump corruptly used an official White House visit for a foreign leader to compel the Ukrainian president into helping him cheat in the next election.”

The president’s acquittal is all but certain. Democrats would need 20 GOP senators to defy their party’s leadership and vote to convict in order to remove Trump from office.

That outcome is not likely with partisan battle lines so deeply drawn, especially in the backdrop of how Americans are deeply divided over impeachment and with the nation watching as the political proceeding plays out ahead of a presidential election.

The White House has blocked key witnesses from participating in the trial and has not cooperated with subpoenas from House investigators. Democrats need four Republicans to join them to win a procedural battle that will enable them to request documents or witness testimony. There are no indications right now that any GOP senators will break with their leadership.

Schiff called Trump’s stonewalling of the impeachment process a “furious effort to conceal, suppress and cover up his own misconduct.”

Added Schiff: “His order was categorical. It was indiscriminate and historically unprecedented. No president before President Trump has ever ordered the complete defiance of an impeachment inquiry or sought to obstruct and impede so comprehensively the ability of the House of Representatives to investigate high crimes and misdemeanors.”