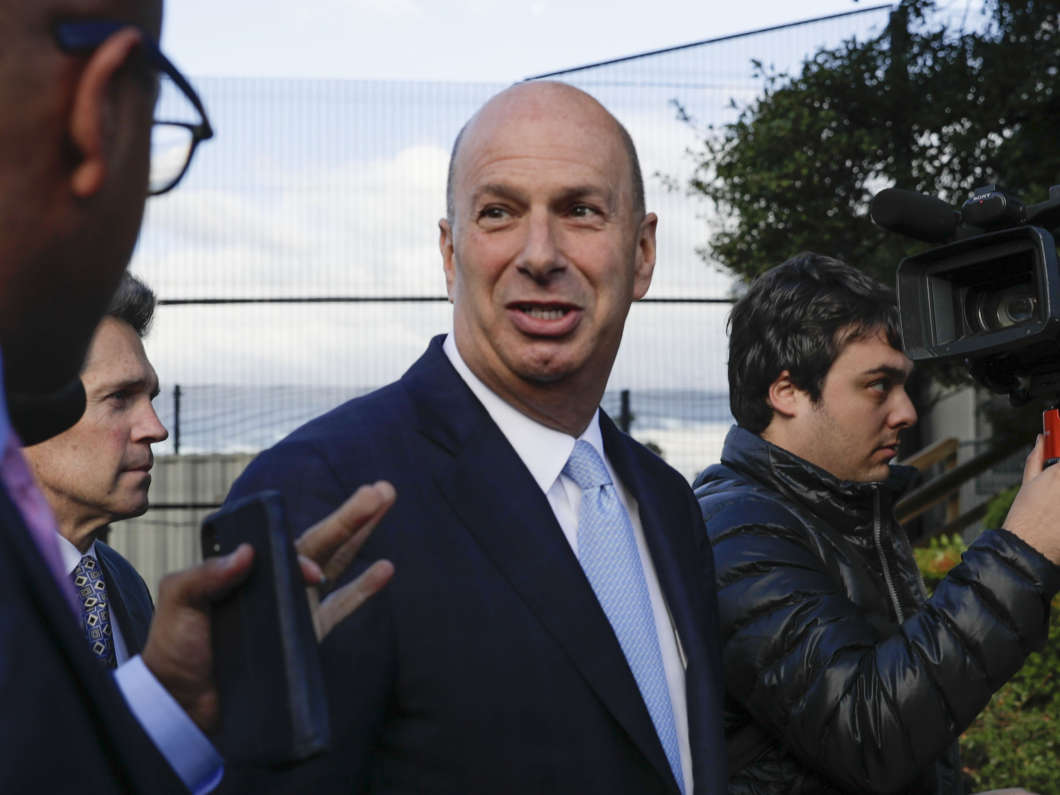 Gordon Sondland, the U.S. ambassador to the European Union, is likely the most anticipated of the eight witnesses scheduled to testify in this week's public impeachment hearings.
Image credit: Pablo Martinez Monsivais

The House impeachment inquiry begins its second week of public hearings with the Intelligence Committee scheduled to hear testimony from eight more witnesses over three days.

In what was at times dramatic testimony, the trio of diplomats recounted how private citizens, including the president’s personal attorney, Rudy Giuliani, impacted the Trump administration’s posture toward Ukraine. Though none of the three was on the July 25 phone call between President Trump and Ukrainian President Volodymyr Zelenskiy that set off the impeachment inquiry, Democrats say their accounts helped illustrate how Trump sought to leverage security assistance for Ukraine to secure a public commitment from Zelenskiy to investigate Joe Biden, Trump’s potential 2020 rival and the former vice president.

On Friday, the committee heard closed-door testimony from David Holmes, a State Department aide who worked at the U.S. Embassy in Kyiv, the Ukrainian capital. Holmes gave firsthand testimony about overhearing Gordon Sondland, the U.S. ambassador to the European Union, telling the president in a July 26 phone call that Zelenskiy would do “anything you ask him to” and that the Ukrainian leader committed to “do the investigation,” according to a copy of Holmes’ opening statement confirmed by NPR.

Taylor revealed in his testimony that his aide overheard the call, but Holmes’ account was the first detailed description of the conversation. Holmes said that Sondland told him the president cared about only “big stuff,” which, according to Holmes, included the “Biden investigation.”

Here’s what to expect when questioning resumes on Tuesday.

Thursday, one panel only at 9 a.m. ET

Is this the last week of public hearings?

It’s expected that the committee is wrapping up its public hearings and will begin the process of writing a report on the impeachment inquiry. Schiff sidestepped a question last week about whether Hill’s testimony would be the last open session but said the panel was working to “move expeditiously” while also working to move “methodically.”

What happens next, after the Intelligence Committee completes its work?

The Intelligence Committee is directed, under the House resolution setting up the procedures for impeachment, to write a report with its findings and recommendations and send it to the House Judiciary Committee, the panel that has primary jurisdiction for considering any articles of impeachment. That report is required to be released to the public.

What is the House Judiciary Committee’s role?

The committee is tasked with evaluating the findings from the Intelligence Committee. It is likely to hold hearings of its own as it considers drafting articles of impeachment. The committee released its own procedures that would allow the president and his counsel to attend any hearings, ask questions of witnesses and respond to questions. The panel could then move to hold a hearing to consider articles of impeachment. If it approves any, they would then go to the full House of Representatives for a vote.

What articles of impeachment are being discussed?

Schiff has said he plans to reserve judgment until he confers with his colleagues in the House Democratic Caucus, but he told NPR last week that any number of impeachable offenses could be considered — including bribery. House Speaker Nancy Pelosi, D-Calif., echoed that argument, telling reporters that the evidence uncovered by the inquiry amounts to bribery. But Pelosi also said there was no determination yet on whether Democrats were proceeding with impeachment. Schiff has also said that the refusal of a number of Trump administration officials to comply with subpoenas for testimony and documents could build a case for an article of impeachment on obstruction of Congress.

If the House approves articles of impeachment, what will the Senate do?

Articles of impeachment are like an indictment. If the House passes a resolution with articles, it’s the Senate’s role to then hold a trial to decide whether to acquit the president or convict and remove him.

Senate Majority Leader Mitch McConnell, R-Ky., has said that the Senate would move to the issue quickly but also that he had no idea how long a trial could last. He made it clear that he thinks both sides should be given ample time to present their cases. McConnell noted that the 1999 impeachment trial of Bill Clinton took two months, but he said that was “a totally different case, a totally different time.”

McConnell and Senate Republicans continue to strongly defend the president and argue that the Democrats’ focus on impeachment is a purely political ploy to undo the 2016 election. A two-thirds majority — 67 votes — is needed to convict in the Senate, so if all Democrats stuck together, they would need 20 Republicans to join them.

How can I watch this week’s hearings?

The hearings will be livestreamed on NPR.org. You can also listen to special coverage on many local public radio stations.