Impeachment Looms Over Trump Trip Abroad, As It Did For Clinton In 1998 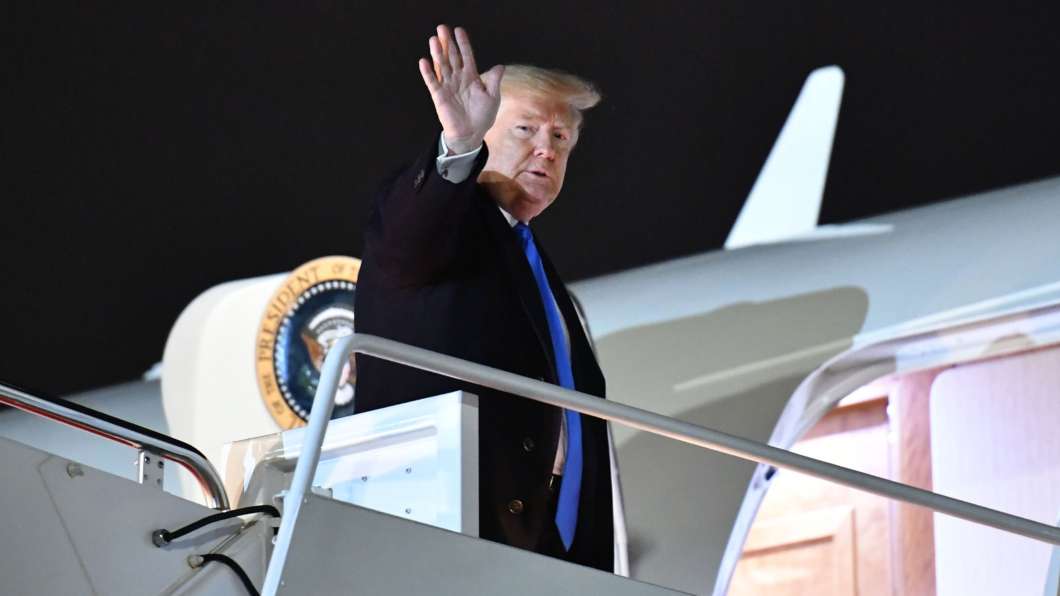 President Trump travels to London on Monday. But as the House Judiciary committee holds its first hearing, it's unlikely Trump will be able leave the impeachment inquiry behind him.
Image credit: Mandel Ngan

President Trump leaves Washington on Monday to meet foreign leaders at a NATO summit. But if history is any guide, Trump won’t be able to leave behind the impeachment inquiry that looms over his White House.

At one time, lawmakers would refrain from criticizing a president traveling overseas, abiding by the adage: “politics stops at the water’s edge.” But even in 1998, when former President Bill Clinton was traveling in Ireland and the Middle East during the impeachment hearing process, he could not escape questions about what was happening in Washington.

There was little refuge from the political storm for Clinton — a taste of what Trump can expect this week, as he meets with foreign leaders while the House Judiciary Committee debates the fate of his presidency with its first hearing on the issue on Wednesday.

In 1998, Clinton was in Ireland to tout the historic peace agreement with Northern Ireland he helped broker earlier that year. Joe Lockhart, who was Clinton’s press secretary at the time, remembers waking up in the ambassador’s residence in Dublin to unwelcome news from back home.

“There were rumors going around that Joe Lieberman was going to go to the floor of the Senate and make a statement about impeachment,” Lockhart recalled in an interview with NPR.

Lockhart didn’t know what the conservative Democratic senator from Connecticut was going to say, but he knew it wasn’t going to be good. Lockhart was waiting for President Clinton to come downstairs for a breakfast meeting – and dreading it. “Among the staff we were all basically trying to figure out who was going to tell him.”

They expected a blow-up. But Clinton surprised his team. “‘I know this is going to happen. Don’t try to talk him out of it. Just tell him to say what he thinks,'”Lockhart said, recounting Clinton’s reaction. “And we all kind of sat there stunned that he was so stoic about it.”

Lieberman expressed “deep disappointment and personal anger” that Clinton had engaged in an affair with an intern, Monica Lewinsky, and that he misled the nation about it.

Clinton was in the Middle East later that year when the House Judiciary committee, then led by Republicans, passed a fourth article of impeachment. The next day, at a press conference standing next to Prime Minister Benjamin Netanyahu, Clinton delivered opening remarks focused entirely on peace between Israel and the Palestinians.

The first question went to an Israeli journalist who turned straight to impeachment. “Mr. President, what is your reaction to the decision of the Judiciary Committee of the House yesterday? Do you intend to resign as did President Nixon?” the journalist asked.

Clinton said the decision had been expected. “I have no intention of resigning. It’s never crossed my mind,” he said.

“I think the president has come here on a very clear voyage of peace. And I believe it would be appropriate to ask one or two questions about the peace process. I would like to know the answers too,” Netanyahu said.

The Israeli journalist resumed his question, asking Clinton whether he would consider resigning if the House of Representatives voted to impeach him. The answer was still “no.”

And so it went. There was no escape. Impeachment hung over everything. On the flight home, Lockhart says the president and his top foreign policy advisers were weighing a military strike on Iraq. A long-simmering problem was coming to a boil at the worst possible moment politically.

“There was this striking dichotomy on the plane where in the front there was a group of people including the president on a secure teleconference trying to figure out when and if to launch this strike on Iraq. And in the back, we were doing a vote count of how many people were coming out against us,” Lockhart told NPR.

During a break in deliberations on Iraq, Lockhart remembered seeing Sandy Berger, Clinton’s national security adviser, with his head in his hand. “He said, ‘This is just really tough. We need to do this. but no one is going to believe we are doing it for the right reason,'” Berger said, as Lockhart recalled.

“And I said, ‘Sandy: if you think it’s bad, you should go back to the back of the plane,’ where we were doing the vote count. He didn’t think it was that funny. I did.”

Much like Clinton, President Trump’s entire time in office has been clouded by investigations. Which means that even as impeachment looms over his trip to London, it won’t be Trump’s first foreign trip overshadowed by bad headlines back home. It’s something all modern presidents have had to deal with, to varying degrees.

“It just comes with the territory. Some of those issues spike a little higher. It’s a high spike these days,” said Ari Fleisher, who was President George W. Bush’s first press secretary.

One difference between Trump and his predecessors is that Trump regularly vents on Twitter — a reflection of different styles as well as different political calculations about moving public opinion. Fleisher said there’s no question that Trump will find a way to weigh in from London.

“He has to do his job, travel, do the things presidents are supposed to do. And he’ll have every ability to fire back. Counter-punch, punch and counter-punch again,” Fleisher said in an interview.

“And my biggest fear with President Trump — and I’ve said it a million times — that sometimes he counter-punches so hard, his follow-through hits himself in the nose,” Fleisher said.