Impeachment Hearing FAQ: Who Will Testify And How The Questioning Will Work 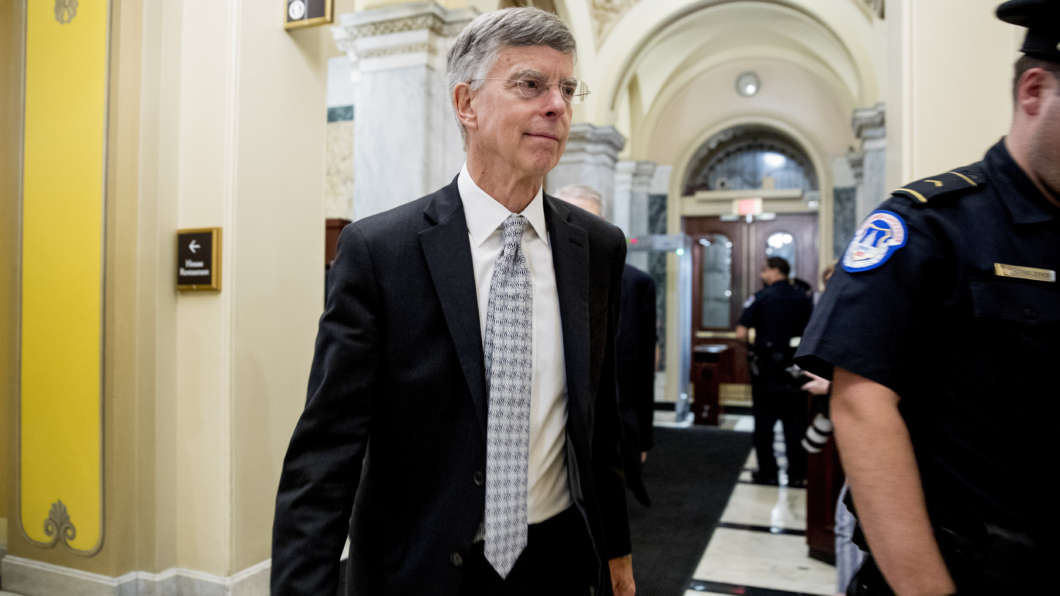 Ambassador William Taylor is the first witness to appear in the first public impeachment hearing on Wednesday. He's a career diplomat who outlined the effort to get Ukraine's president to commit to political investigations in return for military assistance.
Image credit: Andrew Harnik

Public impeachment hearings begin Wednesday, and the first round of witnesses include three career public servants who have testified behind closed doors that President Trump did link military aid and a White House meeting for Ukraine with a promise to investigate one of the president’s domestic political opponents.

Congressional Republicans continue to back the president and denounce the impeachment inquiry as an effort to undo the results of the 2016 election. They have largely focused their complaints on the process, but some have also sought to discredit key witnesses and others have argued that the allegations against Trump do not merit impeachment. The president continues to insist that the July call with Ukraine that set off the inquiry was “perfect.”

Here is what to expect from the hearings this week and what will follow:

When are the hearings and how do I follow along?

The first hearing is on Wednesday, beginning at 10 a.m. ET. The second hearing is scheduled for 9 a.m. ET on Friday. You can watch live on NPR.org and listen to special coverage on many local public radio stations.

Schiff is using this week’s hearings to focus on the testimony from officials who handled U.S. policy in Ukraine. All three have already appeared in closed-door interviews and backed up the complaint filed by an anonymous whistleblower that set off the impeachment inquiry. Transcripts of those interviews have already been released.

The three witnesses who will appear:

William Taylor, the top diplomat in Ukraine, told investigators that he learned shortly after he was tapped for his post that there was a parallel foreign policy channel set up that he believed undermined U.S. national security interests.

George Kent, the deputy assistant secretary of state for European and Eurasian affairs, described how Rudy Giuliani, the president’s personal lawyer, went against the traditional bipartisan approach regarding U.S. support for Ukraine in an effort to push for political investigations.

Marie Yovanovitch, was ousted from her post as the U.S. ambassador to Ukraine in May after a campaign led by Trump’s personal lawyer Rudy Giuliani to criticize her performance and alleged lack of support for the president’s policies. She recounted in her closed-door testimony that she was told by Ukrainians to “watch my back” because Giuliani’s associates were pushing their business interests and viewed her as an obstacle.

How will questioning work during the hearing?

A resolution approved by the House lays out the impeachment inquiry process, including the format for public hearings. Usually, lawmakers get five minutes of questions each. In these hearings, though, Chairman Schiff and ranking member Devin Nunes, R-Calif., will have opportunities for expanded questioning of equal time, up to 45 minutes each. They can also yield that time to a designated committee staff lawyer. After the longer period of questioning, the committee will go back to the shorter rounds with other members.

Will Republicans get any of their own witnesses?

Information about additional witnesses is expected soon. Nunes sent a list of people who Republicans wanted to be added to open hearings, including Hunter Biden and the whistleblower whose complaint triggered the inquiry. But the House resolution dictates that the Democrats need to sign off on any additions, and it’s unclear whether Republicans will get many — if any — on their list.

As the House investigates whether Trump inappropriately pressured Ukraine to investigate former Vice President Joe Biden and his son Hunter, the president and his allies claim it was the Bidens who should scrutinized. But evidence contradicts those allegations of corruption on the part of the Bidens.

Trump’s supporters have also tried to cast the whistleblower as partisan and dismiss the inquiry overall as a “sham.” Hours of testimony have largely corroborated the whistleblower’s account, though.

Nunes said the anonymous whistleblower should testify “because President Trump should be afforded an opportunity to confront his accusers.”

What happens after the Intelligence Committee hearings wrap up?

The Intelligence Committee will likely hold more public hearings next week, but top Democratic leaders have expressed interest in wrapping up the House impeachment process by the end of this year.

The House resolution directs the Intelligence Committee to prepare a report and recommendations and send it to the House Judiciary Committee, the panel tasked with drafting any possible articles of impeachment. That report will also be released publicly.

Yes. The House Judiciary Committee released its own procedures for the impeachment inquiry, which provide for the president and his counsel to attend any hearings, respond to any evidence presented and to question any potential witnesses.

The Judiciary Committee will review the report from the Intelligence Committee as well as input from other panels that have conducted investigations into the Trump administration. It will determine what evidence lawmakers have to back up any articles of impeachment.

Schiff and Judiciary Chairman Jerry Nadler, D-N.Y., have already publicly argued that the White House’s decision to ignore subpoenas for testimony and documents is building a case for one article of impeachment for obstruction of Congress.

Once the panel agrees on any language for possible articles, it would vote on them and present them to the full House. A full House vote would likely happen quickly after any judiciary action — there are very few legislative days left on the calendar this year. Nadler and House Speaker Nancy Pelosi, D-Calif., however, have been careful not to put any hard deadline on when a House vote on articles of impeachment.

If the House impeaches the president, what happens in the Senate?

If the House approves articles of impeachment, Senate Majority Leader Mitch McConnell, R-Ky., said the Senate will move to a trial. McConnell points to the 1999 impeachment trial of then-President Bill Clinton as the model for how a trial would work. He would need to negotiate the procedures with Senate Minority Leader Chuck Schumer, D-N.Y., but any trial is expected to last several weeks.

Chief Justice of the United States John Roberts would preside over the trial and make any rulings on issues that would arise during the debate. All other Senate business would be put on hold, and all senators — including those running for president in 2020 — would be required to be present and listen to the evidence.

Impeachment managers designated by House leaders would lay out the case on the articles of impeachment, and White House counsel Pat Cipollone is preparing to present the defense.

Will the president be removed from office?

Republicans control the Senate and remain strongly opposed to impeachment and have the votes to acquit him. In order to remove the president, the Senate would need a two-thirds majority to convict and remove him from office — that would require 20 GOP senators to join with Democrats.