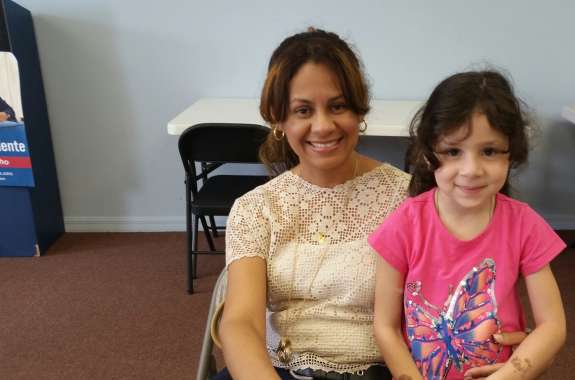 Zulenny Reveron and her daughter. Reveron is getting her paperwork together to file for the President's Deferred Action for Parents of Americans and Lawful Permanent Residents or DAPA program.

A federal appeals court in New Orleans is scheduled to hear arguments Friday on President Obama’s executive actions on immigration. 26 states, including Florida, are suing the federal government saying the president’s actions are unconstitutional. But immigrants in Central Florida are waiting to see what happens Friday with high hopes.

Immigrant advocacy groups estimate more than 250 thousand Florida residents could benefit from the president’s two programs. One allows parents with children who are here legally, and who have been in the U.S. at least five years, to get temporary relief from deportation and a work permit. The second expands a similar program for immigrants who were brought to this country illegally as children.

Zulenny Reveron is an immigrant from Venezuela. She’s been in Orlando for 13 years and says she pays her taxes. Reveron has two children who are both American citizens. She says coming out from the shadows would be life changing.

Friday’s hearing is not about the constitutionality of Obama’s executive action. It’s about whether people can apply for the programs while the lawsuit makes its way through the courts.