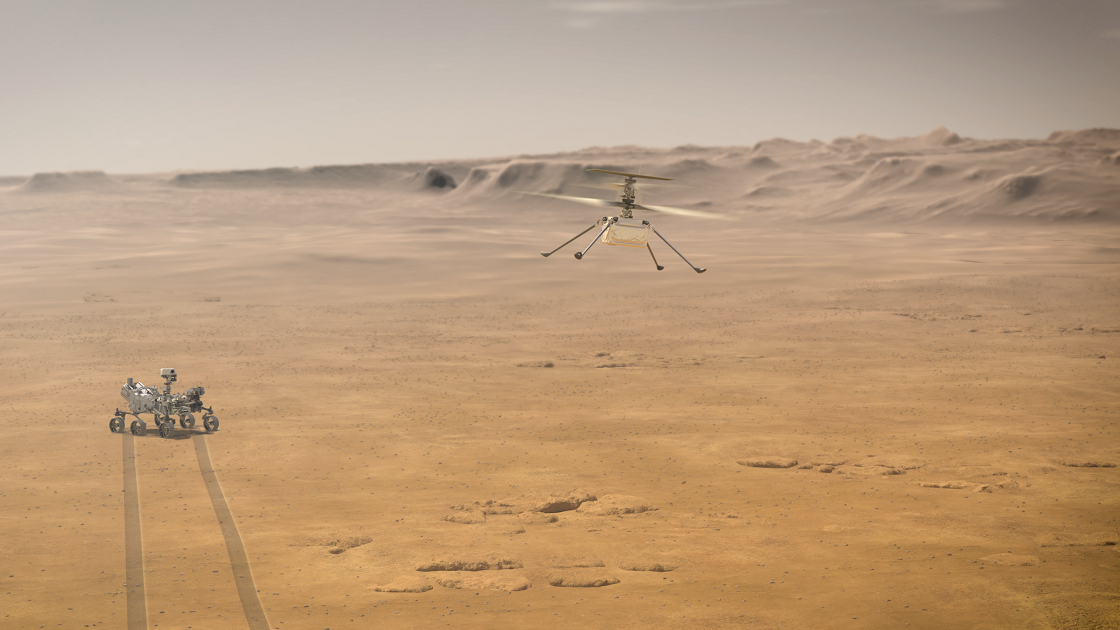 An illustration of Ingenuity's flight test on Mars. Photo: NASA

It’s been a long journey for Perseverance, NASA’s latest Mars rover, which landed safely on the red planet at 3:55 p.m. ET.

“I’m safe on Mars,” the rover announced on Twitter upon its arrival. “Perseverance will get you anywhere.”

Perseverance, a six-wheeled, SUV-sized vehicle with the most sophisticated robotic astrobiology lab ever launched and an experimental aerial drone aboard, is at the heart of the Mars 2020 mission. It blasted off in July on a 293-million-mile journey. And immediately got to work, taking a photo of its “forever home.”

The rover is starting its mission, exploring an ancient crater lake for signs of past life or in pieces strewn across the Martian landscape.

Success depends on a nail-biting “seven minutes of terror” entry, descent and landing, or EDL, sequence that must be completed flawlessly and without intervention from Earth-bound engineers. Because Mars is so far away, it takes 11 minutes for signals to reach NASA’s Jet Propulsion Laboratory in Southern California, where the mission is managed. That means that by the time engineers get a message from the spacecraft that EDL has begun, Perseverance will already be on the ground — intact, they hope.

The atmosphere of Mars is a tiny fraction of Earth’s — too thin to offer much in the way of a brake for a spacecraft on a speeding descent but thick enough to burn it up if something goes wrong. Many previous soft landing attempts on the planet have failed.

The landing sequence for Perseverance is essentially the same high-wire act that a previous rover, Curiosity, used to land in 2012. But for their latest performance, scientists have chosen a more challenging spot on which to set down. Jezero Crater on the western edge of Isidis Planitia is a rougher patch. Unlike Curiosity, Perseverance will use something called Terrain Relative Navigation to find a good spot and steer itself in for a touchdown.

“So, while it’s descending on the parachute, it will actually be taking images of the surface of Mars and determining where to go based on what it sees,” says Swati Mohan, who is in charge of guidance, navigation and control for the spacecraft.

The now dry and dusty 28-mile-wide Jezero Crater shows unmistakable signs of having been filled with liquid water billions of years ago. Perseverance is set to land near an ancient river delta that once flowed into the basin.

Jezero was chosen from among 60 candidate landing sites after an extensive five-year study to weigh the merits of each location, according to NASA.

“In Jezero, we have one of the most beautifully preserved delta deposits on Mars in that crater,” Katie Stack Morgan, the deputy project scientist for the mission, explains.

Ingenuity and other new gadgets

Although Perseverance superficially looks a lot like its predecessor, Curiosity, it’s carrying a bevy of new scientific instruments. They include a better drill to take surface core samples, higher-resolution cameras, instruments to look at Martian mineralogy and detect organic compounds, ground-penetrating radar, a sort of Mars weather station and even microphones that will let earthlings hear what it sounds like on Mars for the first time.

But all the buzz is about the Mars Helicopter, known as Ingenuity. NASA is calling it a “technology demonstration.” If successful, it will be the first powered flight on another world.

Despite the red planet’s wispy atmosphere, engineers hope that Ingenuity’s 4-foot rotors, spinning five times faster than the blades of a helicopter on Earth, coupled with the low Martian gravity, will help get it off the ground.

Like the first powered flight on Earth, Ingenuity’s first flight, scheduled for the spring, will be short and close to the ground. If all goes well, a series of progressively more ambitious flights are planned over a 30-Martian-day period (just a little longer than on Earth).

“The Ingenuity Helicopter is considered a high-risk, high-reward technology demonstration,” NASA says. “If the small craft encounters difficulties, the science-gathering of the Mars 2020 mission won’t be impacted. If the helicopter does take flight as designed, future Mars missions could enlist second-generation helicopters to add an aerial dimension to their explorations.”