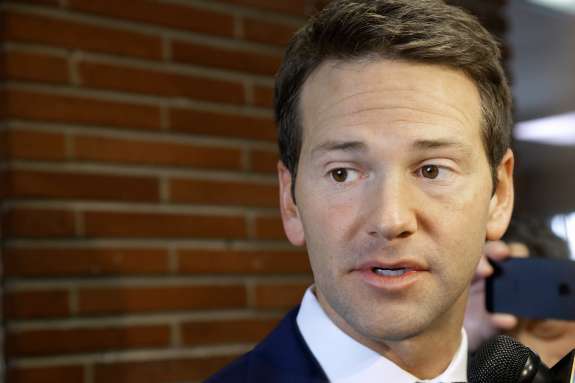 Rep. Aaron Schock, the Illinois Republican whose lavish spending has come under heavy scrutiny, has resigned.

NPR’s Juana Summers tells our Newscast unit that Schock will resign his House seat at the end of the month.

Here’s Schock’s statement on his resignation, which was first reported by Politico:

“Today, I am announcing my resignation as a Member of the United States House of Representatives effective March 31st.

“I do this with a heavy heart. Serving the people of the 18th District is the highest and greatest honor I have had in my life. I thank them for their faith in electing me and letting me represent their interests in Washington. I have given them my all over the last six years. I have traveled to all corners of the District to meet with the people I’ve been fortunate to be able to call my friends and neighbors.

“But the constant questions over the last six weeks have proven a great distraction that has made it too difficult for me to serve the people of the 18th District with the high standards that they deserve and which I have set for myself.

“I have always sought to do what’s best for my constituents and I thank them for the opportunity to serve.”

Focus on Schock’s spending habits intensified last month when The Washington Post reported that the congressman had decorated his office to resemble the red room in Downton Abbey, the hit PBS series. The woman who designed the room had apparently done it for free, leading to ethics questions. Schock, 33, responded by saying he would pay her for the work. Later, there were reports that Schock billed taxpayers and his campaign thousands for private flights or trips taken on planes owned by donors.

The Associated Press reported this week that the Office of Congressional Ethics reached out to the congressman’s associates as it apparently begins an investigation. The news service also reported on business deals involving Schock and his political donors over the past decade. The AP adds:

“Political donors built, sold and financed a house owned by Schock in suburban Peoria. Donors also were involved in the sale and financing of a Peoria apartment complex in which Schock invests.”

The AP says the congressman had built much of his estimated $1.4 million fortune through real estate investments with his donors.

(You can read the full AP story here)

In a statement, House Speaker John Boehner said Schock had “put the best interests of his constituents and the House first.”