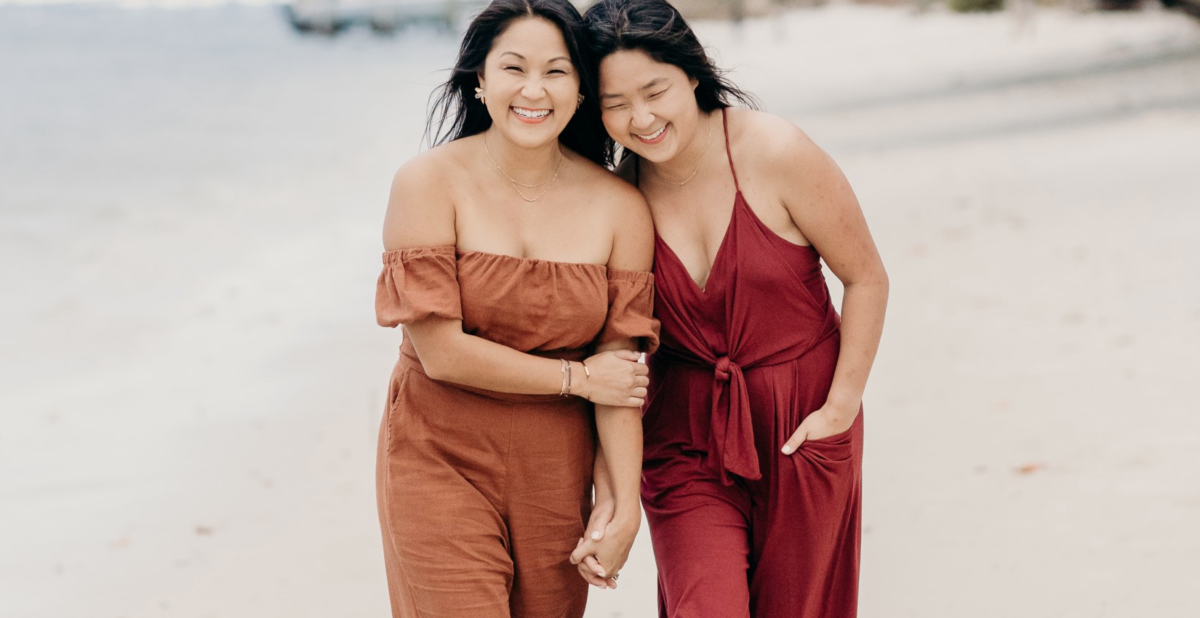 The pandemic has caused many people to be separated from family. But one woman in Palm Beach Gardens actually found family during this time. Molly Sinert was born in South Korea. She was adopted, and grew up in Florida.

After she took a DNA test, she found out she had a twin sister in Philadelphia — and they were both raised in Jewish families. Through a few twists of fate, they missed out on chance encounters throughout the years but Sinert says fate brought them together anyway — albeit in the unlikeliest of circumstances.

After checking her DNA for medical reasons, Sinert randomly found out about her twin sister, Emily Bushnell, through a DNA testing app. It took one of their children to connect the sisters back together, one private message response later.

“Her daughter, our little angel, Izzy, actually took the DNA test and she had been asking her mom and dad for quite some time, ‘You know, can I please do this? I really want to know if mom has any relatives that I could get to know’,” Sinert said.

Sinert and Izzy exchanged a message through the DNA app and found that close to 50% of Sinert’s DNA matched with Izzy, “this unknown person at the time.” The results predicted that Izzy could be her daughter but Sinert doesn’t have children. It was an “unbelievable thing to see.”

Sinert began raising doubts about the entire process until she dug a little deeper into the DNA breakdown.

Meanwhile, Bushnell says her daughter had been interested in their Korean heritage for a long time.

“I resisted for years. I wasn’t comfortable sending off our DNA and honestly thought that it would be unlikely for one of my DNA relatives to have also participated, thinking that my DNA relatives were all in South Korea,” Bushnell said. “Izzy’s interest never faded — so we finally decided to gift her a kit for her birthday a couple of years ago.”

The twins met for the first time on March 29 — their 36th birthday — in Fort Lauderdale. Bushnell said after watching the show “Twinsters” on Netflix, she had “held on to the idea that she’d someday connect with a genetic relative who was also adopted.”

“I was nervous to meet her but more excited than anything. The nerves came from my fear that I wouldn’t meet her expectations, but I think I knew deep down that this wouldn’t be the case,” Bushnell said. “After getting to know her over prior weeks via text and phone, I quickly learned that we are very similar in that regard and that she was most definitely feeling the same way.”

Sinert said it was “difficult to look in the mirror” after meeting her twin for the first time — and she never expected their lives to mirror each other as well, from their Jewish upbringing to the coincidental things they have in common.

“I think growing up, and even now, I identify more with my Jewish heritage than I do with any of my Korean culture background. And that is something that has certainly changed in the last few weeks,” Sinert said.

Sinert found Korean food and culture interesting but she never embraced it or found a connection. She said she now has a reason to explore that side of her identity.

“I didn’t feel like I needed any other religion or culture to adopt to or if, I don’t know, maybe subconsciously I felt that it would be disappointing to my parents that I was looking for something else that they couldn’t give me, which is certainly not the case,” Sinert said. “They would have been supportive of anything that I pursued.”

Bushnell, on the other hand, grew up in a Jewish household in Philadelphia. She said there was very little talk of her Korean ancestry as she “was a Bushnell through and through.”

“I was always aware of my adoption, but I grew up like an average middle class white kid in very white suburban neighborhoods,” Bushnell said. “I just looked different, but not to my family.”

But since she had her daughter Izzy, she noticed a gradual change in her thought process.

“A sense of disconnection with the rest of my family, my identity and the world around me started to grow within and had gotten increasingly stronger over the years,” she said. “It was only a few years ago after hearing an NPR interview with another Korean-American adoptee that I started thinking about connecting with other adoptees and diving more into my Korean heritage.”

Bushnell’s excited that her sister wants to embark on the same exploration. And that also means exploring personal links between them — the birthdays, school celebrations, career moments, motherhood, marriage, and the coincidental twin moments.

“Emily had sent me a prom picture and I immediately jumped up, went through my old albums and pulled out a picture of me and my date. And we had on basically the same style dress: strapless, beaded, fitted gown,” Sinert said. “We’re wearing choker necklaces and our hair was pretty much exactly the same. Even our makeup was similar, and the way we were posed in the photos that we shared with each other. And our dates are pretty much mirror images.”

The twin moments are countless. From growing up with the same Russian Blue cats to buying each other the same symbolic birthday gifts — matching necklaces and bracelets — on the day they met.

The sisters say what’s even more surprising is the missed opportunities for a chance encounter. A 2017 trip brought Sinert to Boulder, Colorado. She even considered moving there after feeling a “strong draw to the city and mountains.” Sinert says Bushnell actually lived in Boulder for sometime and that’s where she gave birth to Izzy.

And it doesn’t stop there. Israel and South Florida were potential connecting points, too.

“There’s this kind of pilgrimage trip that Jewish people can take. It’s called ‘Birthright.’ And it’s a trip that, unfortunately, I did not get to make because I was deep into pharmacy school graduate studies,” Sinert said.

Jewish young adults, between the ages of 18–32, take part in the Taglit-Birthright Israel, a 10-day sponsored opportunity to “discover one’s Jewish heritage.”

“But Emily did get to go on that trip, which is really neat. And my parents joked that maybe we missed our opportunity at that point,” Sinert said.

“Both of our grandparents lived in Delray Beach, probably at the same time, she [Bushnell] has a close cousin of her mother’s that lives in Fort Lauderdale, who I got to meet at the end of March,” Sinert said. “When Emily came down, we joked that if I had been walking in a grocery store, if they would have seen me, they probably would have been like, ‘What are you doing here? You didn’t tell us you were in town.’”

Sinert says exploring Korean culture will help her and Bushnell connect even more, especially during the pandemic.

“I think it can be a really beautiful path that we take,” Sinert says. “There’s a Korean Adoptee Association conference that happens every few years that we are looking into potentially attending, depending on when that schedule picks back up post pandemic.”