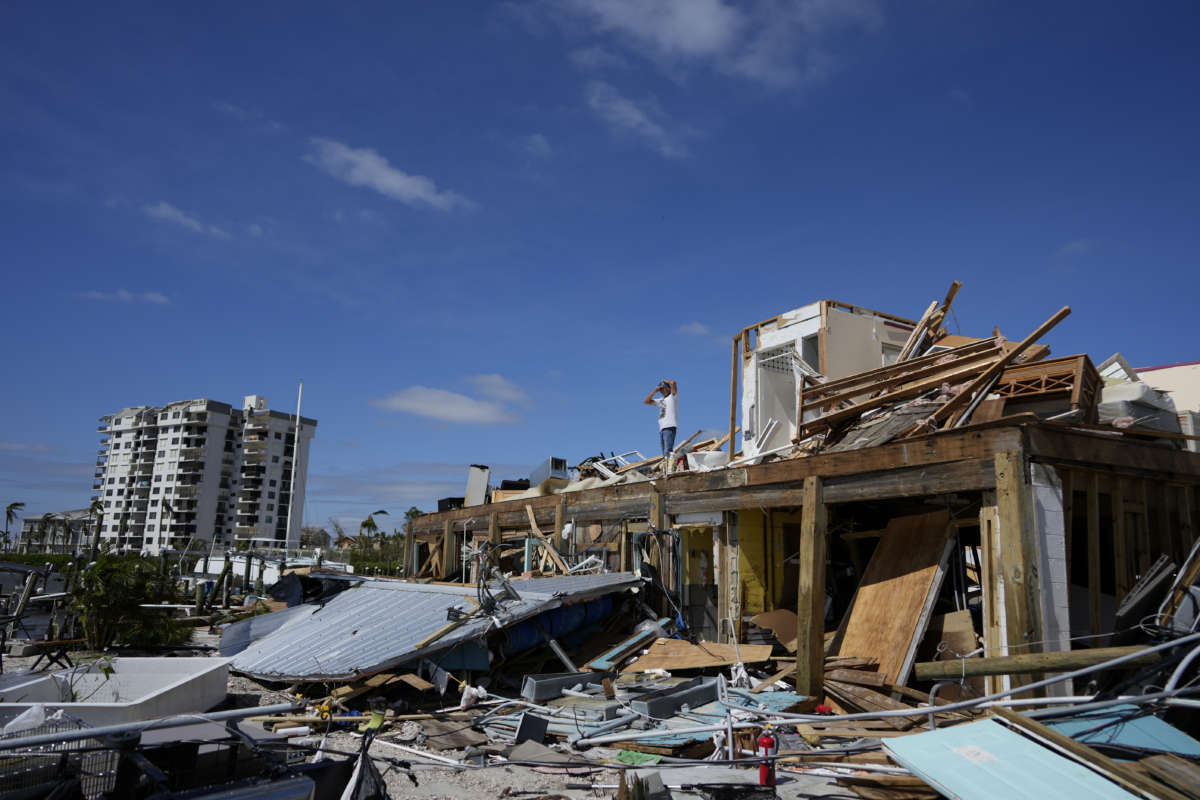 Robert Leisure surveys the wreckage of his business, Getaway Marina, which was destroyed during the passage of Hurricane Ian, in Fort Myers Beach, Fla., Thursday, Sept. 29, 2022. (AP Photo/Rebecca Blackwell)

More than three weeks after Hurricane Ian, many are assessing and fixing damage from the storm. Stories and Images of flooded homes and businesses continue to circulate.

Both the stories, the images and now the fear of what could happen can affect where someone decides to locate their establishment.

WMFE’s Talia Blake spoke with Tim Giuliani, CEO of the Orlando Economic Partnership, about the impact a storm like Ian has on incoming businesses.

Attracting Business After A Storm

According to the latest claims data from the Florida Office of Insurance Regulation, more than 533,000 claims have been filed with over 19,000 claims filed for commercial properties. As business owners assess damage and recover, natural disaster like a storm is not the top concern for most companies looking to move to the Orlando region, according to Giuliani.

He said no matter where a company is located in the United States they will have to deal with some type of natural disaster. “I still definitely consider moving my company to Orlando, over you know, Kansas,” he said. “Then you’re dealing with tornadoes. So kind of pick anywhere you want, you’re going to have something to contend with.”

Giuliani said most incoming companies are more worried about wandering animals. “They’re actually probably more questions about alligators in the streets than about hurricanes, just because of people just not being familiar with Central Florida,” he said.

A decade after Hurricane Andrew hit Florida in August 1992, the state adopted the Florida Building Code. The code, which is updated every three years, standardized building codes across the state.

Much like Andrew, Ian will also be a ‘building code changer,’ according to Giuliani. “Based on what I’ve heard from some construction companies, they’re expecting some updates to the building codes.”

He explained that as you look through images of the destruction in southwest Florida, like Ft Meyers, there are some buildings that are still standing. “So then investigating what did they do,” he said. “How did they adapt? And then how can we improve the building codes so that we have more structures that can handle more weather conditions?”

A Distant Memory For Some

A recency bias is when you give greater importance in your memory to the most recent events, which Giuliani said will happen for many incoming new residents and company to the state.

“A year from now, a lot of people outside the state won’t even remember the name of this hurricane and exactly where it hit in Florida. I think that’s just the fact of the matter,” he said. “For those people that were impacted, it’ll certainly be hard on them for the next six to 12 months at least. But for the rest of the people that are kind of back to normal, it will be a distant memory.”