I Thought I Knew Anthony Bourdain. ‘Roadrunner’ Shows Us Who He Really Was 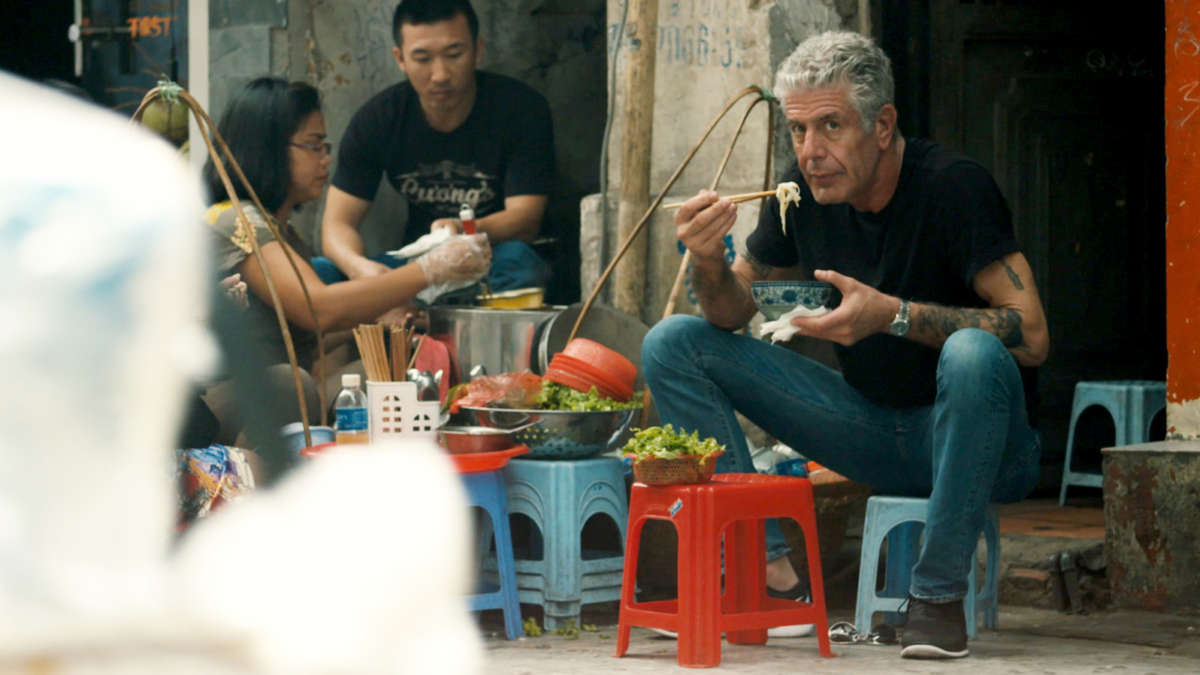 Anthony Bourdain, in Roadrunner, the new documentary about his life.

Anthony Bourdain was in his 40s when he got famous. A lot of people don’t realize that. He’d lived a cook’s life — hot, sweaty, messy, sometimes ugly — and wrote a book about it. He was still on the line when that book, Kitchen Confidential, hit the bestseller list. He found out about it by phone. He stepped away from his post, the rush, his knives and pans, to take the call, laugh, splash water on his face. There was a camera there to capture it, and the footage ended up in Roadrunner, the new documentary by Oscar winner Morgan Neville, about Bourdain’s life, fame, stardom and death.

It covers 20 years, this film. More or less. It largely ignores early Bourdain, young Bourdain, pre-fame Bourdain, focusing instead on those years when the entire world knew his name. It isn’t about the rise so much as the apex — stretched out across almost two decades. Here’s this guy, it says. He’s dead now, but you probably knew him. Or thought you did. Or believed you did. This is who he really was.

I thought I knew him a little. I was wrong. I read the books, watched the shows, saw him speak, same as you. I met him, talked with him, spent a night on the loading dock behind a restaurant in New Mexico drinking beers and passing a bowl with him and the rest of the kitchen crew after a book signing, caught a ride home with his driver while he fell asleep in the back seat, but there are a thousand people out there who can likely claim the same. The man shook a lot of hands in his time. He bent a lot of elbows. He talked and talked and talked. One of the most remarkable things about him (and this I know is true) is that none of it was an act. The person he was on your TV? That was the person he was when he went home at night (or, more likely, back to his hotel). He was curious, funny, angry, goofy and weird. He’d read a lot of books and seen a lot of movies, and all of them lived forever in his head.

Roadrunner gathers the people who knew him best — most of them, anyway (there are a couple of very notable exceptions, like Bourdain’s last girlfriend, Asia Argento, and his first wife, Nancy Putkoski). Friends, partners, chefs, members of his team, his second wife, his brother. They’re all there to tell their stories, to explain him — and then admit that they never could. To laud him and say how much they loved him, and then dissolve into fury at his end.

At first, Bourdain really didn’t know what he was doing

Early on, there’s a small moment that maybe means more than anything else in the entire film. It’s easy to miss. A passing comment almost lost in the frenetic liftoff energy of trying to capture the beginnings of the celebrity whom Bourdain would become.

Speaking into the camera, laughing and wide-eyed at the ridiculous youth of it, the ridiculous audacity, Lydia Tenaglia (longtime producer and partner of Bourdain’s, along with her husband, Chris Collins) talks about how Bourdain, when they first agreed to do a travel show together, was a disaster as a host. Shy, introverted, confused, nervous. He wouldn’t speak, she says — this man who, later, seemed to never stop. There are outtakes of him unresponsive at a tea service, wandering aimlessly through nighttime streets, trying to sleep — an overlarge creature in a tiny hotel bed in Japan.

And then she says that what they — she and Collins — quickly learned was that Bourdain had no idea what he was doing. This was right after Kitchen Confidential, and he’d hardly been anywhere at that point, hardly seen anything that wasn’t fryer baskets, shallots in the pan, the alley behind some NYC bistro while sucking down cigarettes and waiting for the fish delivery.

She said that everything he knew about the world beyond was borrowed. Secondhand. It came from a lifetime of consumption — books, movies, comics, lyrics. It came from dreaming about a larger world he thought he’d never have the chance to see. And that if the show (which became many shows, many books, all done with a lot of the same people who’d been there at the start, most of whom show up here, for the denouement) was ever going to be anything, it had to be something different. Not a food show, not a travel show, but a show about a man given a Golden Ticket to go out into the actual world and see how it measured up against his fantasies.

That hurt. It made me flinch. Because here was a man who compared the world with his image of the world and ultimately, after hundreds of thousands of miles and years dedicated to the looking, couldn’t stay. His friends say it was one bad night. But his words, given in ghostly voice-over, were maybe the truest truth in two hours of often painful honesty: “You’re probably going to find out about it anyway, so here’s a little preemptive truth-telling: There’s no happy ending.”

As the man said — there’s no happy ending

At the end of Willy Wonka & the Chocolate Factory (the good one, the freaky one, 1971, Gene Wilder), Wonka, Charlie Bucket and Grandpa Joe are all riding in the glass elevator, soaring over the city. Charlie has survived the chocolate factory. He has passed every test, proved that he is good and honest and true. And Wonka has just told him that the factory is his — that he’s going to learn all the secrets, get all the chocolate, whatever.

Right at the end, though, Wonka takes Charlie by the shoulders and tells him, “Don’t forget what happened to the man who suddenly got everything he always wanted.”

“He lived happily ever after.”

That scene haunts me. I think about it a lot. I’ve been thinking about it even more since seeing Roadrunner.

Anthony Bourdain was given the entire world. A lot of people probably think he was the luckiest motherf***** on Earth. According to Willy Wonka, he should’ve lived happily ever after.

There are no answers in Roadrunner. That’s not its purpose. But Bourdain lived a remarkable, improbable life. He bore witness to things even when he knew they’d hurt him. He told the truth even when it was hard. Maybe he went too far, or maybe couldn’t ever go far enough, but he went out to look at the world he’d been given and brought along every one of us who wanted to go with him. Roadrunner makes the point that the journey isn’t about the destination, just like a story isn’t all about its ending. You start dumb and you end wise, and everything that happens in between? It’s all important. It all matters. And the best thing you can do is be honest about it no matter the cost.

In the wrap-up, artist and longtime friend of Bourdain’s Dave Choe closes things out with a fitting tribute while the soundtrack blares and the film runs down. It may seem weird to not want to give away the ending of a documentary about someone whose end is already known, but trust me. It’s worth seeing fresh. It’s a moving moment, made of all the things that Bourdain lived for. It’s cathartic. Chaotic. Destructive. Fun. Probably illegal. It’s fantastic. It’s real. And it leaves the world just a little bit better before everything fades to black, which I think Bourdain would’ve appreciated.

If only he’d stuck around long enough to see it.

Jason Sheehan knows stuff about food, video games, books and Star Blazers. He’s the restaurant critic at Philadelphia magazine, but when no one is looking, he spends his time writing books about giant robots and ray guns. Tales From the Radiation Age is his latest book.