‘I Need A Strong House’: After Maria, One Puerto Rican Grapples With How To Rebuild 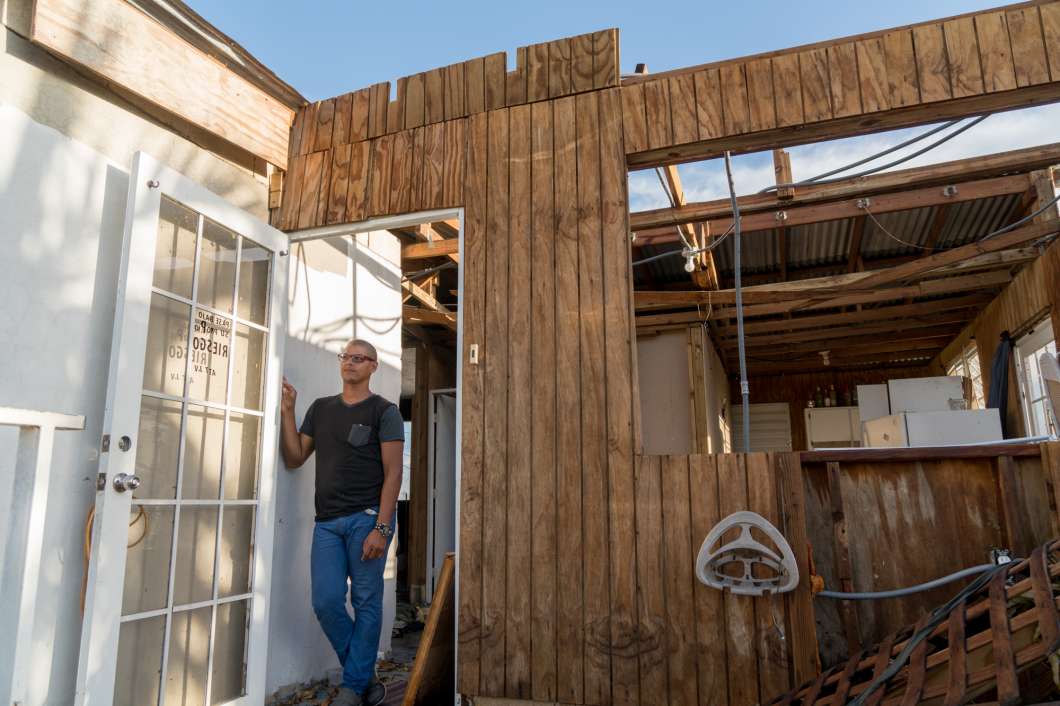 Angel Joel Alvarez Lopez stands by the door of his wood house above his mother's cement house in the Bayamon municipality outside San Juan, Puerto Rico, which was destroyed by Hurricane Maria. He built this wood-and-tin second floor addition about 15 years ago.

Rain is pouring straight through the bare wooden beams that used to be Angel Joel Alvarez Lopez’s roof.

Hurricane Maria razed off half of the tin roof, and blasted all but three of his windows clean out of the wooden walls. A supporting wall fell off and has been hastily pounded back into place.

Two weeks after the storm, Lopez and his girlfriend Liz Vazquez Ojeda are sweeping out water as it rains into the structure. On the floor, his belongings – baseball trophies, soggy pillows, an overturned cooler, a pile of water-saturated bills – mix with twisted pieces of tin from the roof and wet leaves.

Informal building is common in Puerto Rico – local newspaper El Nuevo Dia says government figures show that there are some 75,000 homes built without permits on the island.

These structures, which are not built according to safety regulations, are constructed by families purchasing the materials and doing it themselves. Sometimes it’s the entire building – sometimes, like in Lopez’s case, it’s a weaker addition to an existing structure.

Now, he’s facing months of building ahead of him. “Next time I build, I’m going to build cement walls,” he says. “I need a new house. I like this house, but I need a strong house.”

Facing this powerful hurricane, even homes built according to code would not have necessarily been guaranteed to survive. Most of the homes were built before 2011, when the building code became more stringent, El Nuevo Dia reported. Before, buildings had to be able to withstand winds of 125 mph, and after, they had to withstand 145 mph winds.

When the hurricane made landfall, it was blasting maximum sustained winds of 155 mph.

FEMA hasn’t started inspecting buildings for damage, and it’s not clear when it will begin, a FEMA spokesperson tells NPR. That process could potentially qualify people with damaged homes for a grant, the spokesman says, regardless of whether they were originally built to code. FEMA has provided Lopez with $500 so far, after he applied for assistance.

But looking around at his rain-soaked property, it’s clear that Lopez needs to take action quickly. He has no insurance on his home and has started the process of applying for a loan. He plans to comply with building regulations when he reconstructs the addition. But he wonders how to do that exactly, when it’s not clear if overwhelmed government workers will be able to carry out building code inspections anytime soon. He laughs. “I’m waiting.”

Lopez is a handyman, and he’s starting work Tuesday as a paramedic – a job he took on to try to pay for the repairs. That will leave him with four free hours in the afternoon to sleep.

Lopez and Ojeda are currently sleeping in his 14-year-old son’s room, where they joke that the bed is magic because it seems to somehow still be dry despite the water pooling on the floor and dripping from the ceiling.

But he’s able to crack jokes – as he walked out of his home, he carefully closed the door – “so the mosquitos don’t get in.”

And he has found beauty in the new, windowless view in the room where he slept before its roof blew off.

The hurricane’s winds have stripped leaves off trees, leaving him with a remarkably clear view all the way to San Juan. The sun starts coming out and a rainbow appears. “It’s fresh,” he says.

The current situation, he hopes, is only a “temporary nightmare.”