‘I Come As A Pilgrim’: Pope Francis Begins Historic Visit To Iraq 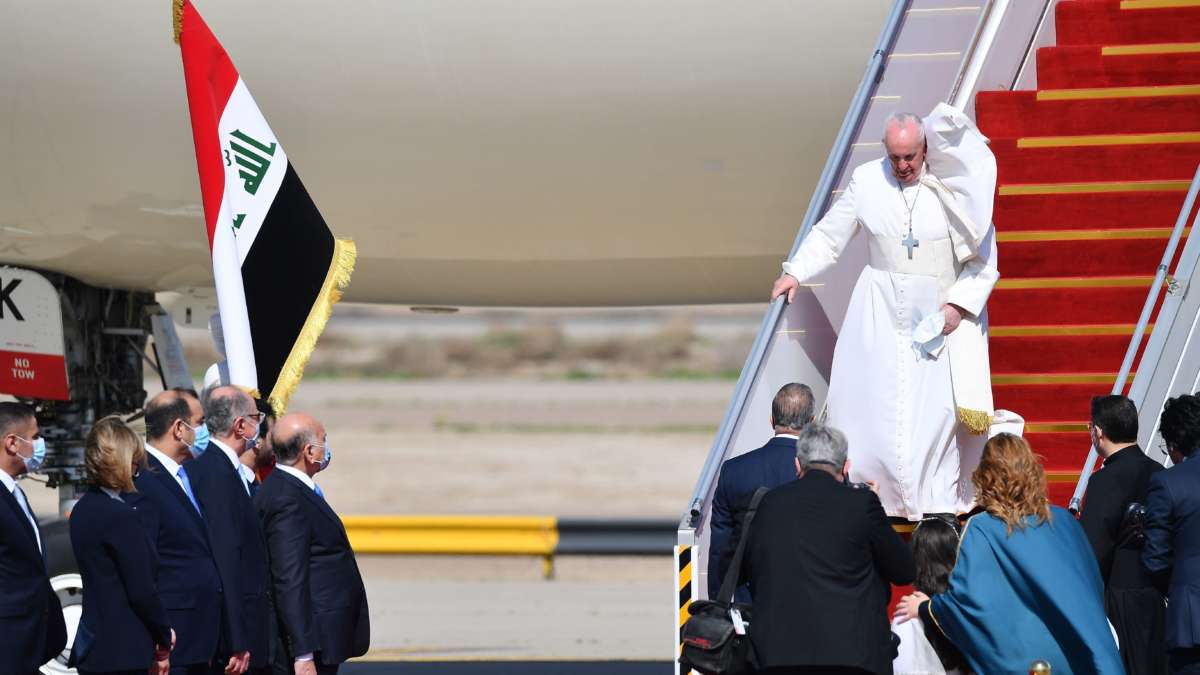 IRBIL, Iraq – Pope Francis has touched down in Iraq for the first-ever papal visit to the predominantly Muslim country, beginning a four-day visit in Baghdad, where yellow and white Vatican flags and likenesses of the pontiff flutter above hastily weeded traffic circles.

Prime Minister Mustafa al-Kadhimi welcomed Francis at Baghdad International Airport. He was greeted with fanfare as he stepped onto the red carpet, and then by a choir as he entered the airport.

Crowds of people waved Iraqi and Vatican flags as he passed on his way to sit and speak with the prime minister in a reception area of the airport. The conversation was not broadcast. As Francis left the airport, he passed people dancing and singing, few of whom were wearing masks.

The pope is set to cross the capital to the golden-domed presidential palace on the banks of the Tigris River and meet President Barham Saleh later Friday.

During the trip, Francis will meet leaders from Iraq’s dwindling Christian community and hold an inter-religious meeting at the ancient site of Ur, traditional birthplace of the biblical Abraham, revered by three faiths as the founder of monotheism.

On Saturday, Francis will be hosted by Grand Ayatollah Ali al-Sistani, the leader of Iraq’s Shiite Muslims. Sunday will see him travel to the north of the country, including to Mosul, and lead prayers in areas retaken from Islamic State extremists.

“I come as a pilgrim, as a penitent pilgrim to implore forgiveness and reconciliation from the Lord after years of war and terrorism,” he said in a video message before the trip. “To ask God for the consolation of hearts and the healing of wounds.”

For Iraqi Christians, who trace their history almost back to the time of Jesus, the visit is long-awaited. Pope John Paul II had wanted to visit Iraq in 2000, but negotiations with former dictator Saddam Hussein fell through.

“It is a happiness and a blessing,” says Tony Fawzi, a day-laborer, after attending Mass at a Chaldean Catholic church recently in Baghdad. “And it is not only a visit to Christians but to Iraq in general.”

Church leaders have been preparing intensely for the visit, particularly in the town of Qaraqosh, near Mosul, where a Syriac Catholic church was among those burned and gutted in 2014 when militants from ISIS blazed through the Nineveh Plains.

“We started rebuilding the church in the end of 2019,” says Rev. Ammar Yako, of the Church of the Immaculate Conception in Qaraqosh. They had hoped to finish the renovation in time for Easter Mass this year, “but when we hear that the pope will visit Iraq, especially this church, we start working quickly to finish it,” he says.

“Really now the church, it’s so beautiful,” he says. “And the first one to pray in it after the renovation will be the Holy Father.”

Yako says a few years ago he could never have imagined such a thing. After the town was retaken from ISIS in 2017, the houses were charred shells and the people were gone. Now, a little under half the residents are back, he says, and maybe the papal visit will inspire more to return.

“This is what we hope that this visit will give us in the future,” he says.

In Najaf, by contrast, the pope’s meeting with Sistani will be a private audience in the reclusive cleric’s modest home, which for decades he has rarely left.

The visit is considered historic by the clerical establishment in Najaf, says Hayder al-Khoei, director of international relations at an institute run by his family. His grandfather, Grand Ayatollah Abulqasim al-Khoei, was Sistani’s predecessor and teacher.

“Both the Shiite Islamic establishment and the Catholic Church have consistently condemned violence being committed in the name of religion,” says Khoei. “And I think that’s one thing that will be a topic discussed between the pope and Sistani.”

He adds that, as it happens, he has met both men. “And it’s striking how similar their personalities are. So even as individuals, in terms of their calmness, their piety, they’re going to see eye to eye on a personal level, not just philosophical.”

The visit is going ahead despite a recent uptick in rocket attacks on military bases and the U.S. Embassy, which American officials have blamed on Iran-backed militias. U.S. airstrikes hit buildings used by those militias just over the border in Syria last week, killing one militant.

Public health experts have raised concerns about the visit’s timing: vaccinations against COVID-19 are just beginning in Iraq, and case numbers have ticked up sharply in recent weeks.

Officials insist social distancing measures will be in place at all events, but some are likely to involve large numbers of people. The Chaldean Catholic archbishop of Irbil, the Most Rev. Bashar Warda, tweeted that 10,000 people will attend a Mass on Sunday, in a stadium that can hold 40,000.