Hydrogen may be a climate solution. There’s debate over how clean it will truly be 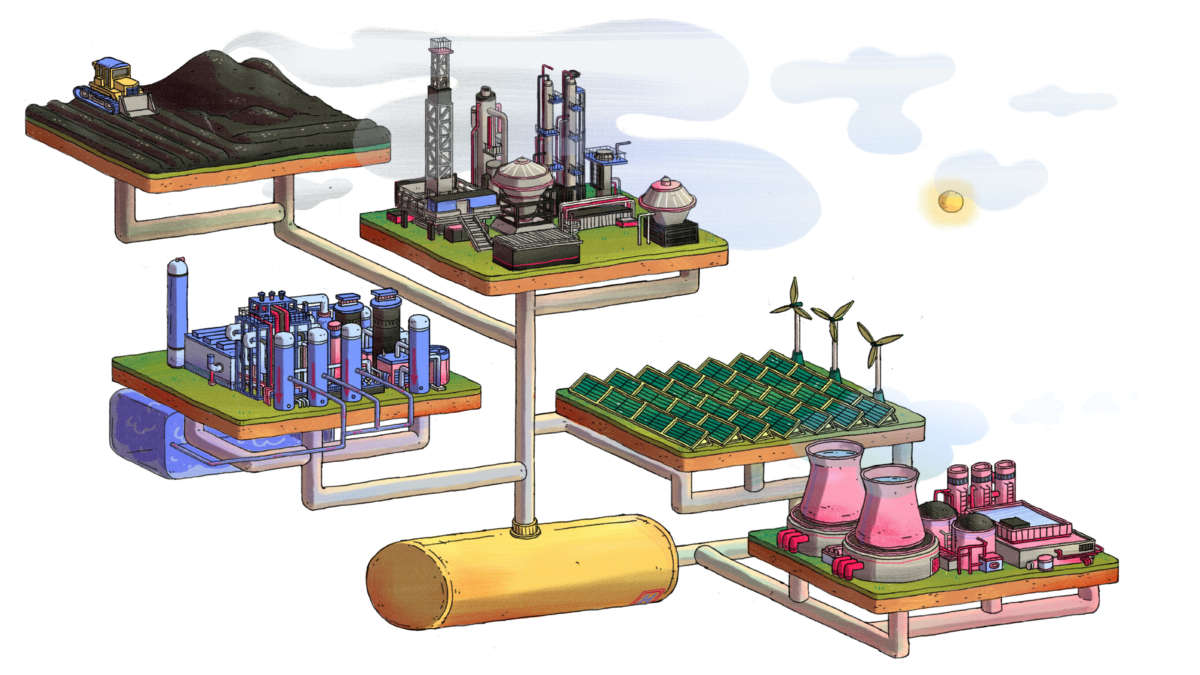 Black or brown hydrogen is extracted from coal. Gray hydrogen is made by heating natural gas. Both create carbon dioxide. Blue hydrogen captures about 90% of that carbon dioxide and stores it, usually underground. Green hydrogen uses renewable energy to split hydrogen out of water using electricity. Pink hydrogen does the same but relies on nuclear power.

HANNIBAL, Ohio — At an industrial site on the banks of the Ohio River, a big blue building with pipes coming in and out of it could be part of the country’s transition to cleaner energy. At least its owners hope so.

Inside is a gas-fired power plant that could generate enough electricity for almost 400,000 homes. Lately, though, the company that operates the plant, Long Ridge Energy, has started blending a small amount of hydrogen — no more than 5% — in with the natural gas.

“The market really shifted over the last couple of years,” says CEO Bo Wholey. “We’re really responding to what the market wants.”

What the market wants is energy that doesn’t create carbon pollution. Wholey thinks hydrogen, the most common element in the universe, could be the answer.

When it’s used to fuel a car or power plant, hydrogen’s chief byproduct is water — not climate-warming carbon dioxide. But finding a clean and cheap source for making hydrogen has eluded scientists and policymakers for decades.

Someday, Wholey hopes the plant will run completely on hydrogen. That goal may be more attainable after Congress passed and President Biden signed a major infrastructure law last year. It includes $8 billion for at least four hydrogen hubs to produce, store and use this combustible gas. Groups around the country are hoping to land hubs, including one in this part of the Ohio River Valley.

“That’s certainly something that we’re going to be evaluating, just as we think about how to make running on hydrogen more economical,” Wholey says.

In a zero-carbon world, hydrogen is “crucial”

Mention hydrogen, and some remember the 1937 Hindenburg disaster, where a hydrogen-filled airship exploded (though there are questions about whether the flammable gas was the cause). But today climate scientists see hydrogen as a potentially clean replacement for fossil fuels in heavy industry.

“I think hydrogen is crucial,” says Paulina Jaramillo, a professor of engineering and public policy at Carnegie Mellon University and a co-author of a recent U.N. report on climate change. She says hydrogen can be a clean alternative for industries such as steel mills, fertilizer plants or shipping.

The infrastructure bill is the largest in a long line of attempts to spur technology for hydrogen in the U.S., which the federal government has been trying to support since the George W. Bush administration.

The big problem is getting hydrogen. It can be made in a number of ways — each with its own color-coded designation. There’s gray hydrogen, which is how most hydrogen is made today, through heating natural gas. This creates lots of carbon dioxide, the driving force in climate change, which the United Nations has called a “threat to human well-being and (the) health of the planet.” Blue hydrogen, where that CO2 is captured and stored underground, is being pushed by big oil and gas companies as a lower-carbon energy source.

The infrastructure bill mandates four hubs for “clean” hydrogen, including at least one for blue hydrogen and another for green hydrogen. That’s the process in which renewable energy is used to extract hydrogen from water using electrolysis, so it gives off no carbon dioxide. Another hub will produce pink hydrogen, which uses electrolysis powered by nuclear energy.

“If we’re going to produce hydrogen with natural gas, it must have CCS,” says Jaramillo.

Blue hydrogen captures up to 90% of its CO2 and relies on the natural gas system, but it leaks methane, a highly potent greenhouse gas. This has some scientists questioning how beneficial it will be to the climate.

Julie McNamara, deputy policy director for climate and energy with the Union of Concerned Scientists, wants better methane safeguards on any federal funding for blue hydrogen.

“It’s one of the most important things to get right, because the government is now investing $8 billion to catalyze an industry that might not be clean at all if they don’t get this right,” says McNamara.

In the debate over blue vs. green hydrogen, fossil fuels hold the inside track

Even with questions about blue hydrogen, some scientists think it’s still worth pursuing.

“For the immediate future — the next 10, 20 years — making hydrogen in an efficient way from fossil resources might still be the (fastest) way to reduce our carbon footprint,” says Goetz Veser, a professor of chemical engineering at the University of Pittsburgh. Veser studies the production and use of hydrogen, including ways to capture carbon dioxide during its production.

Veser says one advantage of blue hydrogen is that it relies on technology that is many decades old.

Another advantage, says Bridget van Dorsten, an analyst with the Wood Mackenzie energy research consultancy, is the fossil fuel industry’s political power in the United States. She says that makes blue hydrogen more likely than a full push for green hydrogen.

“Do you think that a natural gas industry would be more amenable to [a plan of] ‘Hey, we’re going to totally get rid of all of your infrastructure’?” van Dorsten asks.

“Or do you think that they would prefer, ‘Hey, you know what, that investment that you made in all of that infrastructure, you can keep it. You’ve just got to pay more to add carbon capture on to it.’ Because I think they’d be interested in the latter,” she says.

One key blue hydrogen supporter is Sen. Joe Manchin, D-W.Va. Manchin blocked Biden’s climate agenda last year but said he might accept a scaled-down bill with clean energy tax credits, including one for hydrogen. Manchin also has made it clear that he wants one of the hydrogen hubs built in his home state of West Virginia.