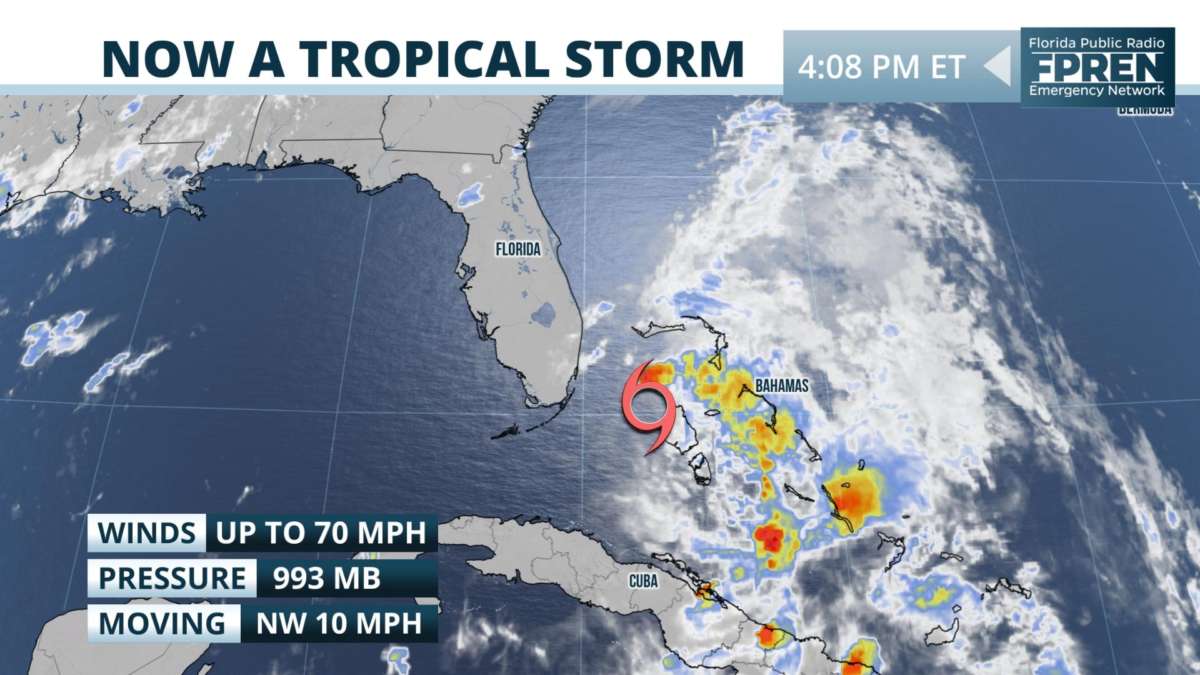 Isaias has weakened to a tropical storm, thanks to interactions with the Bahamas, dry air in the mid levels, and wind shear nearby.

As of five o’clock, Isaias is a tropical storm with winds of 70 miles an hour. It’s tracking to the northwest it should be over warm Gulf Stream waters overnight and during that time it is expected to re strengthen into a hurricane.

Isaias should track up the Atlantic coastline tomorrow, be off the Space Coast by the evening and we’re still expecting strong winds and heavy rain in our area tomorrow afternoon through the overnight.

Here are the 5pm Key Messages on #Isaias. Hurricane conditions are still expected along portions of the Florida east coast on Sunday. Go to https://t.co/SiZo8ohZMN for detailed local information. The latest advisory is at https://t.co/tW4KeFW0gB pic.twitter.com/DCnawp12kC

Isaias has top sustained winds of 85 mph as of the mid-morning National Hurricane Center advisory. Satellite imagery and data from aircraft reconnaissance strongly suggest the storm is experiencing wind shear and dry air, which is likely to limit or halt any additional strengthening before it draws closer to the Florida Atlantic coastline late Saturday night and Sunday.

Original article as of 1:00 am Saturday:

This is a breakdown on the timing and magnitude of potential hazards from Hurricane Isaias, broken down into southeast, east-central, and northeast regions of the state.

Hurricane conditions are not expected in Miami or Fort Lauderdale, but possible only a few miles up I-95 in West Palm Beach.

The heaviest rain from Isaias is likely to fall along the Treasure Coast, where three to six inches are expected. Two to four inches of rain is possible near West Palm Beach, with lesser amounts of one to three inches possible near Miami and Fort Lauderdale.

Hurricane Isaías is expected to exit South Florida by midday Sunday, with conditions returning to normal by Sunday night.

It is becoming increasingly likely that Isaías will produce hurricane conditions near and east of the I-95 corridor or East-Central Florida. Winds in gusts in excess of 74 mph will be possible immediately along the Space Coast from Merritt Island to Melbourne and points south. Strong tropical storm force winds (58-73 mph) are possible along the I-95 corridor from Daytona Beach to Titusville, and winds between 39 and 57 mph will be possible.

Heavy rain is likely Saturday evening through Sunday afternoon. Three to six inch rain accumulations are possible along the Space Coast, where this could produce flash flooding. Rainfall amounts of one to three inches are possible west of the I-95 corridor to about the Florida Turnpike, including the Orlando metro area.

Storm surge flooding of 2 to 4 feet is possible along the immediate coast. If Isaías takes more of a westward track, storm surge inundation will likely be higher along the coast, and spread farther inland. Hazards from Isaias will diminish in Central Florida by Sunday evening, with near normal conditions expected to return Monday.

It is becoming increasingly likely that tropical storm conditions will occur along the First Coast Sunday night, with hurricane conditions possible farther south in coastal sections of Flagler County.

Winds from Hurricane Isaias are expected to be strongest near the coast, where gusts to 60 mph will be possible in the overnight hours. Winds of 30 to 50 mph are possible farther inland to about the I-95 corridor.

The heaviest rain from Isaias is expected to stay offshore. However, one to three inches of rain is possible across Duval, St. Johns, Putnam and Flagler counties.

Storm surge flooding will be possible along the immediate coast and the St. Johns River. In these locations, several inches of rain and one to three feet of storm surge inundation are possible. Rough surf and life threatening rip currents will exist along all area beaches.

Conditions should begin to improve in Northeast Florida by midday Monday, as Isaías accelerates toward the Mid-Atlantic states.