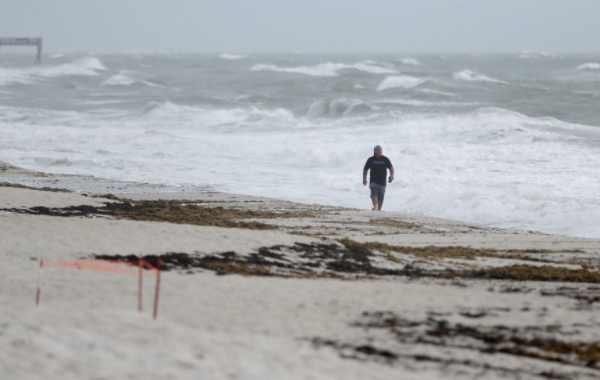 A beach goer walks along the shore as waves churned up by Tropical Storm Isaias crash near Jaycee Beach Park, Sunday, Aug. 2, 2020, in Vero Beach, Fla. Isaias weakened from a hurricane to a tropical storm late Saturday afternoon, but was still expected to bring heavy rain and flooding as it barrels toward Florida. (AP Photo/Wilfredo Lee)

TALLAHASSEE — Florida emergency-management workers aren’t approaching this year’s hurricane season as anything basic, but they are looking forward to what the new state director calls the ABCs — “Anything But COVID.”

As the six-month hurricane season officially begins June 1, the Florida Division of Emergency Management will have surpassed 450 days responding to the COVID-19 pandemic.

“They would love to get back to doing tropical cyclones and wildfires and things like that, because we have been doing COVID a very long time, and we’re ready to be doing something else,” division Director Kevin Guthrie said.

The hurricane season is projected to be above average for storms and got off to an early start as Tropical Storm Ana has already formed and dissipated,

The National Oceanic and Atmospheric Administration last week predicted a 60 percent chance of 13 to 20 named storms (winds of 39 mph or higher), with six to 10 reaching hurricane strength (winds of 74 mph or higher) and three to five considered major hurricanes (winds of 111 mph or higher).

“Maybe in the next couple of years we’ll see that switch, and we’ll start to see a general decreasing trend,” National Weather Service meteorologist Mark Wool said. “But you know, the wildcard here is global warming, and we don’t quite know how that’s going to influence that just yet.

On Monday, President Joe Biden announced that $1 billion is being made available to states, territories, tribes and rural communities for what he said is typically the busiest time of the year for disasters in America: hurricane season in the South and East and fire season out West.

“Last year, as you all know, we faced the most named storms on record,” Biden said. “Seven out of the 30 named storms alone claimed 86 lives and caused more than $40 billion in damage. This year, NOAA is focusing on another severe season, perhaps — and God willing — not as bad as 2020, but still quite bad. We all know that these storms are coming. And we’re going to be prepared; we have to be ready.”

But that didn’t mean Florida was spared as, for example, the Pensacola area sustained severe flooding and other damage from Hurricane Sally, which made landfall across the border in Alabama.

Other than some new residents to the state, Wool said a positive this year is that the vast majority of Floridians have experience with storms. That will help as reminders go out to put together storm kits that include such things as a week’s supply of non-perishable foods and drinks, two weeks of medicines and first-aid supplies.

And after a year of COVID-19, Guthrie said the state has stockpiled enough personal protective equipment for several hurricanes and will again be able to offer non-congregate shelters — hotels and dorms for individuals or families. Unlike in 2020, such accommodations will be just for people who test positive for the virus.

To potentially reduce crowding at shelters, residents are also being asked to know how their homes are built to withstand winds and flooding as they make evacuation decisions.

Guthrie also wants people to review their residential insurance policies, particularly because property values and costs of building materials have been on the rise while Federal Emergency Management Agency assistance tops out at $36,000.

Guthrie also said plans remain from last year for staff members to respond to simultaneous disasters, with a team working on COVID-19 response in the state emergency operations center shifting to a neighboring building while a second team takes the desks in the main room to focus on storms.

Guthrie took over as director on May 3, replacing Jared Moskowitz, who announced he was stepping down to spend more time with his family in South Florida.

But Guthrie isn’t new to the agency. He was appointed as the division’s chief of staff in October 2018 and was bumped up to deputy director three months later.