Hurricane Isaias Will Enter the Straits of Florida Saturday Night 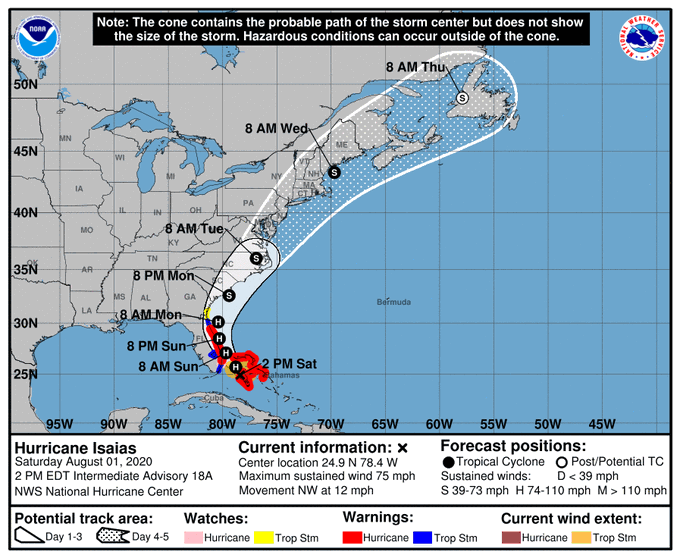 Hurricane Isaias has brought flooding, rain and damaging winds to the Bahamas, and the storm is now eyeing the Florida peninsula.

ISAIAS EMERGING OVER THE STRAITS OF FLORIDA

Hurricane Isaias remains a Category 1 storm and is about 140 miles off the coast of Fort Lauderdale.

It should enter the warm waters of the Gulf Stream tonight, during which time it could strengthen a little bit, before paralleling the Atlantic Coast on Sunday.

The storm’s center should be off the Space Coast by Sunday evening. Hurricane-force wind gusts will be possible toward Titusville and Cape Canaveral on Sunday, with tropical storm-force gusts extending as far inland as Orlando.

On top of that, several inches of rain and one to four feet of storm surge flooding will be possible.

According to the latest forecast track, Isaias should enter the Straits of Florida tonight, and track up the Atlantic Coast Sunday. Meteorologist Megan Borowski says heavy rain, damaging winds, and storm surge flooding are all possible tomorrow.

“Tropical storm-force wind gusts will be possible near and North of Miami, and in parts of coastal Palm Beach County, hurricane force gusts aren’t out of the question. On top of that, up to 4 inches of rain could fall near the coast and 1 to 3 feet of storm surge flooding is possible from Miami northward.”

Megan says that conditions will begin to deteriorate overnight, with tropical storm conditions lasting throughout most of the day Sunday.