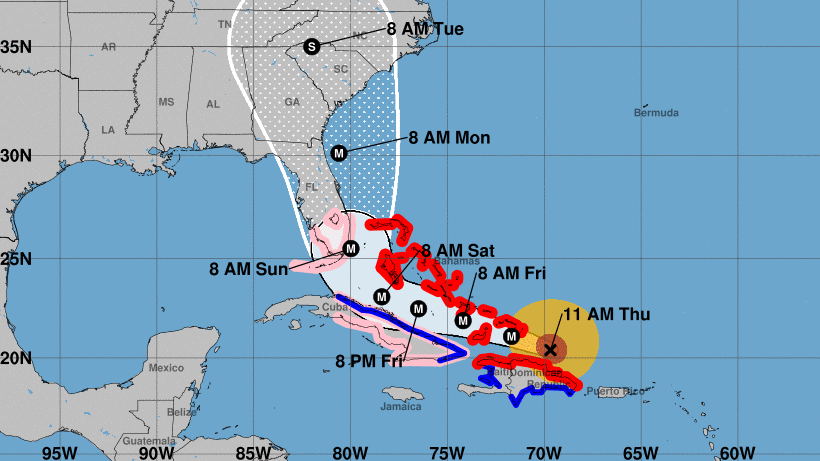 The five-day path prediction for Hurricane Irma includes a northern turn close to the coast of Florida.

Hurricane Irma is bringing death and destruction to the Caribbean and raising alarm in Florida, where the chance of a direct impact continues to rise. The storm is blamed for at least nine deaths; thousands of people are being told to get out of its way.

A hurricane watch is now in effect for parts of Florida, from Jupiter Inlet (north of West Palm Beach) south around the peninsula to Bonita Beach (south of Fort Myers). A watch means hurricane conditions are possible within 48 hours. The alert also covers the Florida Keys, Lake Okeechobee and Florida Bay.

Under the latest forecast models, Irma would remain a major hurricane through at least Monday morning, when it would approach the coast of Georgia and South Carolina.

Irma brought strong winds and flooding to Puerto Rico and the Virgin Islands last night. Its dangerous eye passed north of Puerto Rico’s main island — possibly sparing the area from the worst of the 185-mph winds that wreaked destruction in St. Martin, Anguilla and Barbuda on Wednesday.

Things could get worse: Category 1 Hurricane Jose is now trailing behind Irma, prompting a hurricane watch to be issued for Antigua and Barbuda and other islands Thursday.

“We are in a state of siege,” Daniel Gibbs, president of the Territorial Council of St. Martin, tells Radio Caraibes International.

Gibbs said that “95 percent of the territory has been destroyed,” echoing the assessment of Antigua and Barbuda Prime Minister Gaston Browne, who told CNN that Barbuda is now “barely habitable” after Irma’s eye hit the island early Wednesday.

Floodwaters swamped cars and houses in Puerto Rico, where seven rivers are now running above their flood levels, according to the National Weather Service office in San Juan, capital of the U.S. territory.

After passing north of Puerto Rico, Irma is following the same angle past Hispaniola, the island that is home to the Dominican Republic and Haiti. As of 11 a.m. ET, its eye was about 75 miles east-northeast of Puerto Plata, close to the center of the island’s northern coast.

Irma is sending hurricane-force winds outward up to 60 miles from its center; tropical-storm-force winds extend up to 185 miles. Its wind gusts were hitting 185 knots — more than 212 mph.

The human toll and damages from Irma are still being realized, partly because of the wreckage and debris the hurricane has left in its wake and partly because of communications networks being brought down by powerful winds and flying debris.

On Barbuda, a toddler died during the storm, Prime Minister of Antigua and Barbuda Gaston Browne told ABS TV/Radio Thursday.

There are reports of at least two more deaths — one in Anguilla and another in Puerto Rico, where local media relay a police report that an elderly woman died while being moved to a storm shelter.

The hurricane is now moving west-northwest at 16 mph. The storm is expected to move near or over the Turks and Caicos and parts of the Bahamas and later Thursday, likely hitting parts of Cuba on Friday.

Irma’s path is now projected to pivot north as it nears Florida. The timing of that turn is crucial to millions of people in the state, many of whom live in places already under mandatory evacuation orders. Those orders took effect in Key West on Wednesday; they now also cover barrier islands, including Miami Beach.

Miami-Dade County Mayor Carlos Gimenez’s order covers around 150,000 people, out of the 2.7 million in the county.

There has been a run on gasoline, water, and batteries, NPR’s Greg Allen reports. And while not everyone plans to leave, “the spectacle of what happened to Houston after Harvey, and the memories of Wilma in 2005 and Andrew 25 years ago, in 1992, are really on everyone’s minds. I’ve heard many people talk about Andrew.”

In downtown Miami, Greg adds, officials who are preparing for Irma are worried about more than 20 tall construction cranes, especially ones that tower over residential areas.

“They’re designed just to withstand winds up to 145 mph,” Greg says. “But right now, Irma’s winds are far higher … so a city official warned residents who live nearby those cranes to maybe think about leaving their buildings.”

Irma has slightly weakened — its sustained winds have been falling Thursday — but it’s likely to remain a Category 5 storm for at least 24 hours, the National Hurricane Center says.

Tropical-storm-force winds will arrive in southern Florida and the Keys on Saturday, the hurricane center predicts.

Those who choose to stay in the Keys will largely have to fend for themselves. The National Weather Service says all Coast Guard search and rescue vessels have left the area and the Port of Key West is closing Friday morning.

As Irma moves west in the Caribbean, its storm surge poses a dangerous threat. The Turks and Caicos and parts of the southeastern and central Bahamas could see from 15 to 20 feet of coastal water above normal levels. Cuba’s northern coast could get a surge of 5 to 10 feet.

After maintaining 185-mph winds, a tight eye and a well-organized system for more than 24 hours, the powerful storm finally showed a hint of weakness overnight, with the hurricane center saying at 5 a.m. Thursday that Irma had “become a little less organized” with clouds in its eye a central convection that was “somewhat ragged.”

As Irma brought havoc to the northern Leeward Islands on Wednesday and Thursday, two new hurricanes were christened in the Atlantic region: Jose, a storm that is tracking behind Irma, and Katia, which is off Mexico’s southern state of Veracruz.

Jose has gained strength and now has maximum sustained winds of 90 mph, the hurricane center says. The storm is projected to become a major hurricane Friday, and its winds are expected to top 125 mph over the next 36 hours before it begins to weaken.

As Jose moves west, it will take a more northward approach than Irma. But before it veers north of Puerto Rico, the hurricane could add to the miseries Irma brought to St. Martin, Barbuda and other areas. Jose is predicted to remain a major hurricane (meaning its winds are at least 111 mph) when it nears those islands early Saturday.

In the Gulf of Mexico, the National Hurricane Center says Katia is heading west-southwest and likely make landfall on Mexico’s coast late Friday or early Saturday.