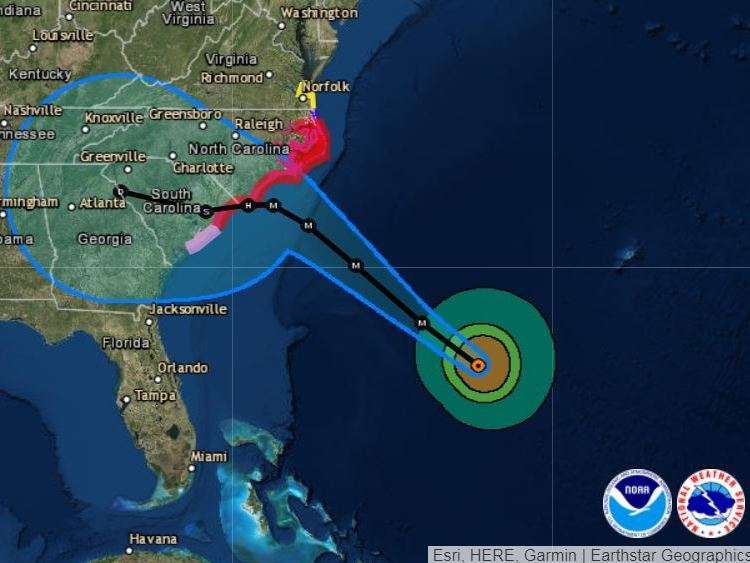 Hurricane Florence is blasting toward the Carolinas, carrying sustained winds of up to 130 mph and the threat of “life-threatening storm surge and rainfall,” the National Hurricane Center says.

A hurricane warning – meaning hurricane conditions are expected within 36 hours — is in effect for a long stretch of the coast, from the Santee River in South Carolina to Duck, N.C. — part of the Outer Banks.

“Preparations to protect life and property should be rushed to completion,” the agency says.

The threat has sparked a rush of evacuation efforts in South Carolina and North Carolina, with more than a million people urged to get out of Florence’s way. Governors of those states have already declared states of emergency, as have the governors of Virginia and Maryland.

Forecasters have adjusted Hurricane Florence’s predicted path, saying that after it makes landfall, it will likely take a more southerly route than had previously been expected. Rather than pushing up toward western Virginia, the storm’s center is now predicted to move across the middle of South Carolina.

For a swathe of the North Carolina shore from Cape Fear to Cape Lookout, the storm surge could range from 9-13 feet, the NHC said. In Myrtle Beach, S.C., and nearby areas, the surge could hit 6-9 feet.

“An Air Force Reserve Hurricane Hunter aircraft that was in the hurricane until just after midnight” recorded a peak wind gust of around 150 mph, the hurricane center said. Florence is currently heading for ocean water with surface temperatures of around 85 degrees, meaning it will likely strengthen on its way to the East Coast.

Even with some weakening that’s predicted just before it makes landfall, the storm “is expected to remain a dangerous major hurricane as it approaches the coastline,” the hurricane center said.

Satellite images show the storm has maintained a distinct eye, and it’s well organized. Its maximum sustained winds are expected to top 145 mph before it loses some steam near the coast. Current forecasts call for its winds to be at least a Category 3 storm when it arrives at the Carolinas.

“A motion toward the northwest is forecast to begin by this afternoon and continue through Thursday,” the hurricane center says. “Florence is expected to slow down considerably by late Thursday into Friday, and move slowly through early Saturday.”