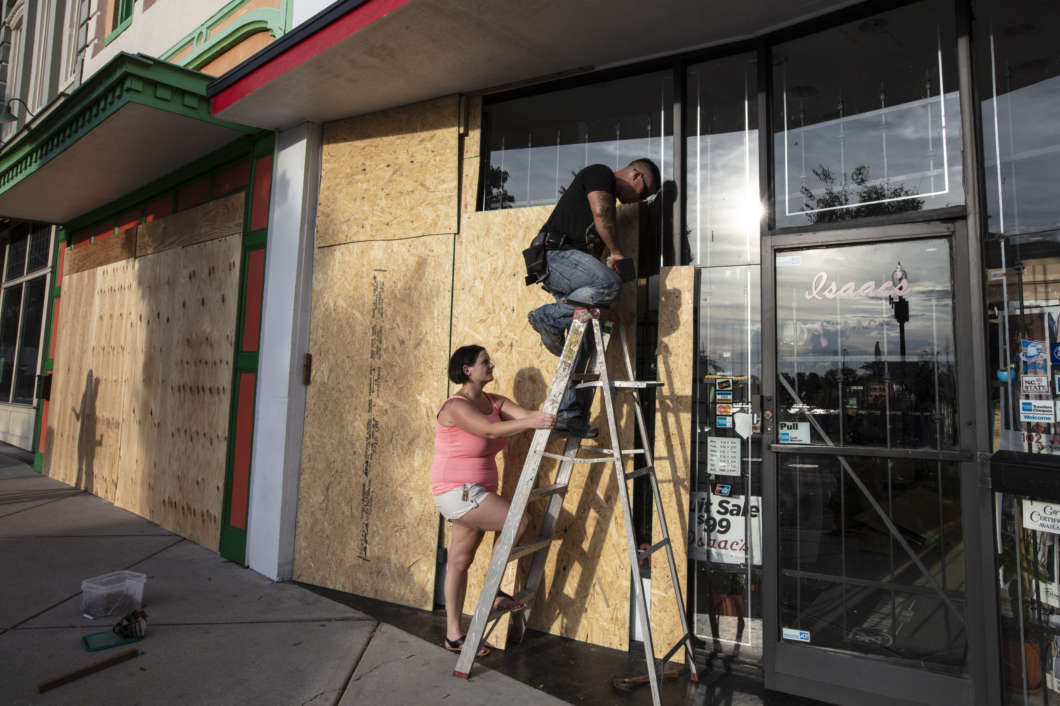 Jacob Harrelson and his wife, Beth Harrelson, install protective plywood on a local business in anticipation of Hurricane Florence in Wilmington, N.C. on Wednesday.

“Little change in strength is expected before the center reaches the coast, with weakening expected after the center moves inland,” the National Hurricane Center said. Florence is currently a strong Category 2 storm.

But despite the drop in wind strength the most dangerous threat comes from Florence’s rains and storm surge, which could bring flooding far inland.

“The larger and slower the storm is, the greater the threat and impact, and we have that here,” NHC Director Ken Graham said on Thursday. He added later, “Most of the fatalities in these tropical systems is water.”

Florence was about 170 miles east-southeast of Wilmington, N.C., at 9 a.m. ET Thursday, the National Hurricane Center said. The storm was moving northwest at 12 mph. It’s currently predicted to make landfall near Wilmington and then head west across South Carolina.

Hurricane conditions will likely hit the Carolina coast on Thursday night or early Friday. And Florence’s large wind field will add to the perils as the storm grinds over beaches and inland.

“You’re going to have damaging winds for a longer period of time,” senior hurricane specialist Stacy Stewart said in an update from the NHC. “So instead of maybe 120 mph winds for 30 minutes, you might end up with 90-100 mph winds for a couple of hours, or three or four hours. And that will produce a lot of damage as well as prolong the beach erosion.”

A hurricane warning is in effect for a big chunk of the Carolina coast, from the South Santee River below Myrtle Beach, S.C., to Duck, N.C. — part of the Outer Banks. The warning also includes Albemarle and Pamlico Sounds, large bodies of water in North Carolina that could see significant flooding.

Despite the drop in maximum sustained winds, forecasters stress that this hurricane is not to be taken lightly. Hundreds of thousands of people have already evacuated. Officials are urging others in its path to follow suit, or prepare for the worst.

Forecasters say Florence will likely turn to the west-northwest and west and slow down its forward motion – a situation that will bring even more rainfall to the area. The storm’s 12-mph forward speed Thursday morning was a marked drop from Wednesday’s 17-mph speeds.

The storm surge — often the most perilous risk to life posed by any hurricane — is expected to inundate areas along the coast with saltwater that’s 9-13 feet deep, from Cape Fear, N.C., to Cape Lookout, N.C. A surge of at least 4 feet is predicted for a much larger area.

Calling the storm surge prediction “incredible,” Graham said that because Florence will likely nudge its way onto the coast, giving its hurricane winds lots of time to force water inland, he wouldn’t be surprised “to see storm surge a mile, a mile and a half inland – maybe even two miles or more, in some cases.”

The latest rainfall projections warn of 20-40 inches of rain from coastal North Carolina into northeastern South Carolina — amounts that could bring “catastrophic flash flooding,” the hurricane center said. The rest of South and North Carolina, including cities from Charlotte to Raleigh, can expect 6 to 12 inches of rain — and up to 2 feet in isolated areas, the NHC warned. That forecast area also includes part of southwest Virginia.

Florence is projecting hurricane-force winds outward up to 80 miles from its center; tropical-storm-force winds are swirling outward up to 195 miles away.In addition to the hurricane’s obvious risks, the National Weather Service says, “A few tornadoes are possible in eastern North Carolina through Friday.”

The hurricane center says Hurricane Florence will likely carry sustained winds of 110 mph for the next 12 hours. That puts it at the upper range of Category 2 storms, which have winds from 96-110 mph.

Here’s how the weather service defines the risks involved with a Category 2 hurricane:

“Extremely dangerous winds will cause extensive damage: Well-constructed frame homes could sustain major roof and siding damage. Many shallowly rooted trees will be snapped or uprooted and block numerous roads. Near-total power loss is expected with outages that could last from several days to weeks.”