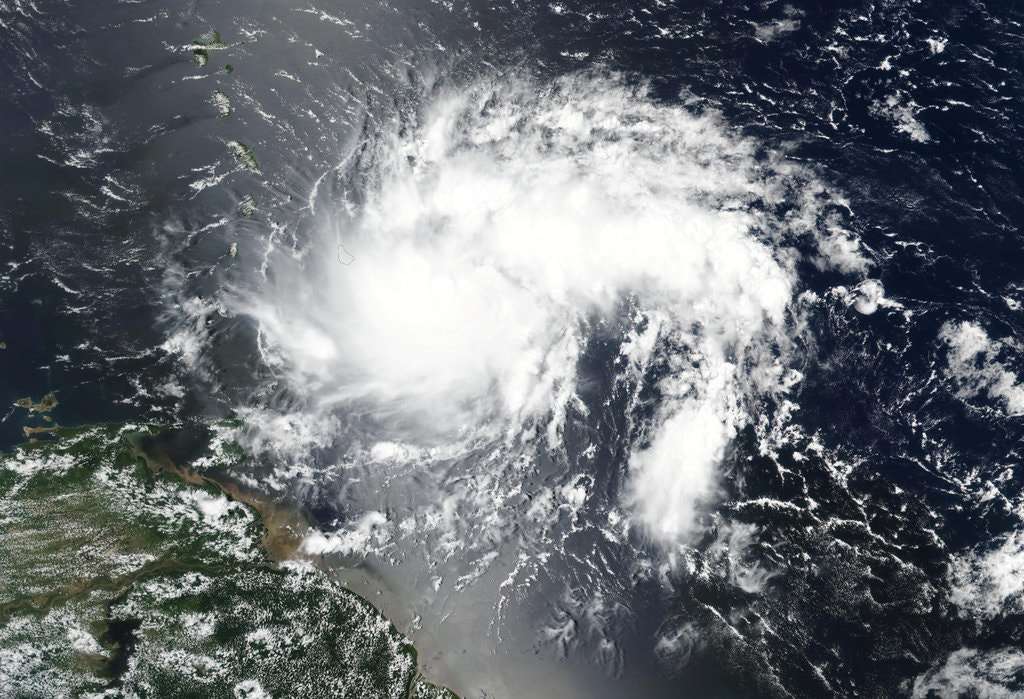 A satellite image of Hurrican Dorian off the coast of Venezuela Monday. Photo: NASA

Brevard County is urging residents on the Space Coast to prepare for a potential impact from a hurricane.

As the forecast predicts a strengthening of Dorian as it moves toward Florida, Brevard County spokesperson Don Walker said residents are starting to worry about potential impacts from the storm. But he said now’s not the time to panic — but instead, prepare.

That includes stocking up on non-perishable food, water, medicine and pet supplies. Don’t forget about including pets into hurricane plans.

Residents on the barrier islands should think about plans should they need to evacuate.

“Anything right now that you think you have to do to prepare yourself for a major storm event — that even could include evacuation,” said Walker. “You wouldn’t evacuate today, but at least have an idea in your head where you might want to go if you need to get off the barrier island or you need to move inland.”

The Air Force’s 45th Space Wing has entered “Hurricane Condition V” and said it is preparing personnel and facilities for the possible arrival of the storm.

The Kennedy Space Center is also preparing for possible impact. NASA’s Crawler-Transporter 2 has been dispatched to Launch Complex 39-B to possibly move a mobile launcher that was at the site for fit checks ahead of the launch of the SLS rocket. A final decision will be made Wednesday whether to move the 400-foot-tall launch platform into the Vehicle Assembly Building to ride out the storm.

Meanwhile, Orange County Fire Rescue is preparing for a possible hurricane by putting up storm shutters and clearing yard debris at its stations.

Residents with special medical needs, like those who need power for medical supplies, need to register now in case they need to use a special-needs shelter.

“And we like for folks to register,” said Carrie Proudfit with Orange County Fire Rescue. “It doesn’t mean you have to go. But it does mean you’re in there. And if you find that you would need to go into a special needs shelter, you can bring a companion. You can even bring a pet, bring your crate in the backseat.”

Orange residents can call 311 to get registered. Check here to find out how to register for special needs shelters across Florida.

Proudfit said your hurricane kit should also include a flashlight, radio and batteries, as well as important documents like birth certificates, social security cards and vaccination documents for your pets. It’s also a good idea to have cash in case ATMs are down.

“But, one of the things we like to remind people, is turn on the tap,” she said. “It’s a little different I think if you’re on well water, but go ahead and turn on the tap and store the water coming out of your own home, just in case you need it.”

By law, you can get a 30-day refill of your prescription during an emergency – even if you just refilled it. That’s true if the National Hurricane Center has issued a hurricane warning in your county, the governor has declared a state of emergency in your county, or your county’s Emergency Operations Center has been activated.

“A great idea is to always have medication that you need that would last a couple weeks, just in the event we have a disruption to access to services locally,” Proudfit said.

You can use the free Florida Storms app to get regular updates from Florida Public Radio Emergency Network meteorologists, and visit here for all of WMFE’s and FPREN’s coverage of Hurricane Dorian.

An Orlando International Airport spokesman said eight flights to and from Puerto Rico are canceled as Hurricane Dorian threatens the island.

Rod Johnson said five flights to Puerto Rico and three from the island are canceled. He said airport leaders are monitoring the forecast as the hurricane’s projected path through the Labor Day weekend includes Central Florida.

And local governments are starting to offer free sandbags to residents. Seminole County will have sandbags available starting Wednesday at the Seminole County Sports Complex in Sanford. Residents should bring their own shovels and gloves, and they will be able to receive up to 15 empty sandbags.

And Orange County has been hosting a free self-serve sandbag program at five county park locations. The county is providing all the tools needed to fill your sandbag with a limit of 10 bags per household. Supplies are offered on a first come, first serve basis, and the program runs through August 31st.

Osceola County residents can fill sandbags starting Thursday morning at more than five locations. Brevard County is not currently preparing sandbags for distribution.  But, the Brevard Sheriff’s Office tweeted Tuesday that the public will be notified if that changes.