Hundreds Join Mourning Walk in Orlando, “Weeping May Endure for a Night, But Joy Comes in the Morning” 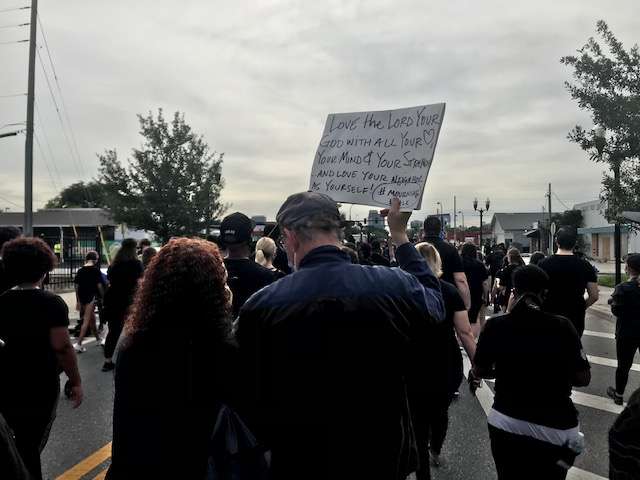 Hundreds of people marched from Camping World Stadium to the Amway Center today, led by political and religious leaders in a Mourning Walk for George Floyd.

Marchers read the names of black men and women who have been killed by police along with Bible verses and prayers as they walked along Church Street.

Pastor Tim Johnson organized the walk. He says he’s not opposed to protests, but he thinks any action should be centered in grief.

“Because you’re never, ever going to change unless you let that pain settle in enough where you realize wow this hurts. And until it hurts, all we’ll ever do is run in a carousel of trying to figure out the problem but not bring healing to it.”

But he said there are officers who need more training and a better understanding of the community.

Orlando Police Chief Orlando Rolon who marched next to Johnson said he was there to start a conversation about improving relationships with citizens.

“Because we need to engage in this type of proactive approach where dialogue is the key message that is being delivered. We have to engage our community. We have done that for a very long time but we have to make sure that it’s meaningful dialogue.”

The march comes after six days of protests in downtown Orlando that have resulted in more than 100 arrests and the use of tear gas on demonstrators.

The City of Orlando released body camera footage yesterday for officers who have used the chemical reagent.

WALK WITH US: there are no signs carried in this march but one, because we here are all united together in hope for a stronger community. #MourningWalk pic.twitter.com/nvklczZAVX