Inside Pulse Gates, Celebration Of Love 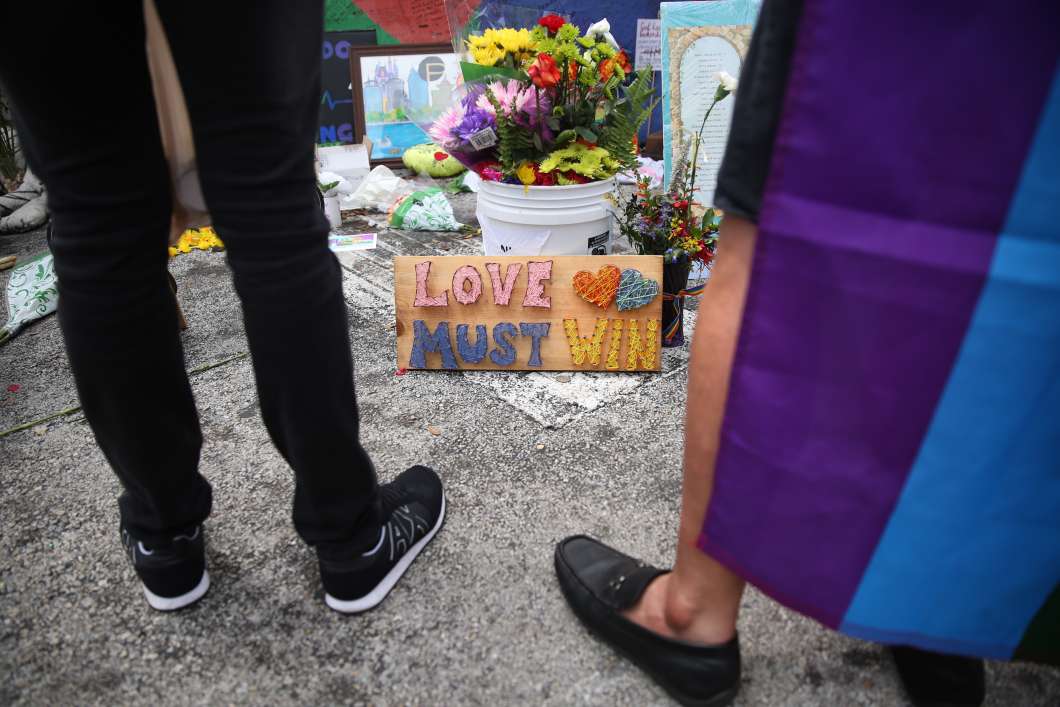 One year after the Pulse shooting, people show up to vigils throughout the day. Photo: Joey Roulette

It was a celebration of love and resilience Monday as hundreds gathered at Pulse to remember the lives lost a year ago.

The ceremony took place inside the Pulse gates. The Orlando Gay Chorus sang, prayers mingled among hugs and tears.

“I miss Pulse,” said Poma. “I miss everything it stood for. I miss serving the LGBTQ-plus community, our Latin community in a way that only a gay bar can.”

Geoffrey Lawrence was among those at the ceremony inside the club gates. He was a Pulse regular but wasn’t there on the night of the massacre. “When it was 2:02 last night I remember being in the same place exactly where I was a year ago, scared in bed wondering if my friends were alive or dead.”

The names of the dead were read under a light drizzle. Survivors, family members, first responders and medical providers were honored. Elected leaders talked.

At noon Monday, churches in downtown Orlando rang their bells 49 times. And just a few miles down at Pulse, the rain started to fall as the names of were read.

Orlando Mayor Buddy Dyer took the stage at Pulse and remembered how telling Orlando that 49 people died at Pulse was the hardest thing he’s ever done in his professional life.

Orange County Mayor Teresa Jacobs told the crowd that she has never seen a community that has the love that Orlando has.

“As I reflect on the events of last night and today, I am reminded of the miraculous ability of love,” said Jacobs. “It’s amazing. The more you give the more you have.”

Hundreds of people gathered at the Pulse nightclub for a ceremony remembering those who died one year ago. Beside the Pulse door are 49 heart shaped wreaths of white flowers, each labeled with a different name.

Elected officials, first responders, medical providers, survivors and family members were among those who were there.

Pulse nightclub owner Barbara Poma told the crowd, “today marks a year from the darkest moment of my life.” She then told the crowd how she’s seen how trauma can affect everyday life.

The Center opened a new gathering space for the LGBTQ community Monday.

“Just come in, get a glance of the new space, and be around people for support. Because everyone is remembering. I have counselors in the back if somebody needs to come speak to somebody. Just come be around people who feel the way that you do,” said Terry DeCarlo, executive director of The Center.

Anne Vanderhoof brought a therapy dog to The Center, a great Dane named Zeus. She says she doesn’t remember where she was when she heard about Pulse, but she remembers the feelings.

“I was in shock somewhere watching the news, in tears, talking with friends, texting, going oh my god, this is down the street from my house. I think everybody was in shock.”

Artist beaux Patrick spent the days after the shooting volunteering at The Center, giving hugs to people who needed it.

“And just empathizing with people, you know? I saw people in the back alley out there cursing god out loud, just raising hell, cursing god. People inside crying. And some people just looked stunned.,” said Patrick.

“Somebody could say Pulse unified Orlando. No. That didn’t happen. What Pulse did was show how unified Orlando is, or was at that time, and still is. You got the community response because it was already there.”

Hundreds gathered outside the Pulse nightclub in Orlando early Monday morning to remember those who died in the mass shooting there one year ago.

The crowd nearly wrapped around the building, many holding candles, some weeping others hugging as family members helped read the names of the 49 who died.

Dozens of angels with makeshift wings stood guard to create a barrier between the ceremony and members of the media covering it.

Mayor Buddy Dyer told families and survivors that Orlando will always take care of them.

The nightclub has turned into a memorial since the shooting. Its owner is working to build a permanent memorial at the site.

Ceremonies and community service projects will take place across Orlando Monday, including a vigil at Lake Eola that’s expected to attract tens of thousands.

This story will be updated throughout the day.