Hundreds Being Evacuated From Burning Ferry In Adriatic Sea 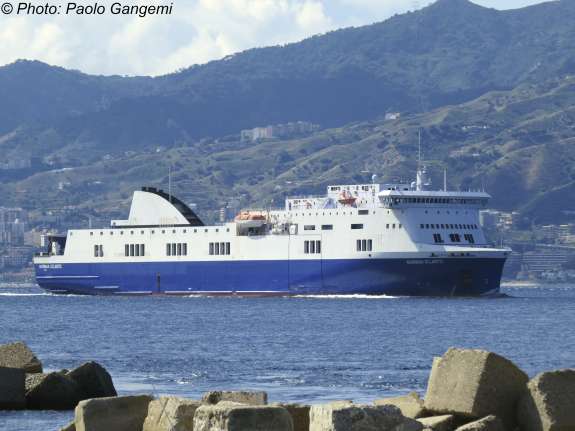 The Norman Atlantic ferry is seen in a photo taken in September. The vessel is the subject of a rescue in the Adriatic Sea.
Image credit: Paolo Gangemi

Gale-force winds and rough seas were hampering an effort to evacuate nearly 500 passengers and crew from a ferry that caught fire off the Greek island of Corfu early this morning, Italian media reports.

Ships and helicopters were trying to get everyone off of the Italian-flagged Norman Atlantic as the vessel burned and began listing dangerously in a sign it is taking on water. So far, there are no reports of deaths or injuries and 170 people are reported to be safely aboard rescue boats, leaving hundreds still on the ship.

Greek, Italian and Albanian rescuers were reportedly taking part in the operation taking place about 40 miles from Corfu in the Strait of Otranto that separates Italy and Albania and the Adriatic and Ionian seas.

“Around 35 passengers were transferred to a nearby Greek ferry by lifeboat, Merchant Marine Minister Miltiadis Varvitsiotis said.

“‘This is a complicated rescue mission… The visibility is poor and the weather conditions are difficult, but we are confident because there are a good number of ships in the area,’ he said.”

The Associated Press, citing local authorities, says the fire broke out on the car deck of the ferry en route from the Greek port of Patras to Ancona in Italy with 423 passengers and 55 crew members aboard.