HUD: Growth Of Homelessness During 2020 Was ‘Devastating,’ Even Before The Pandemic 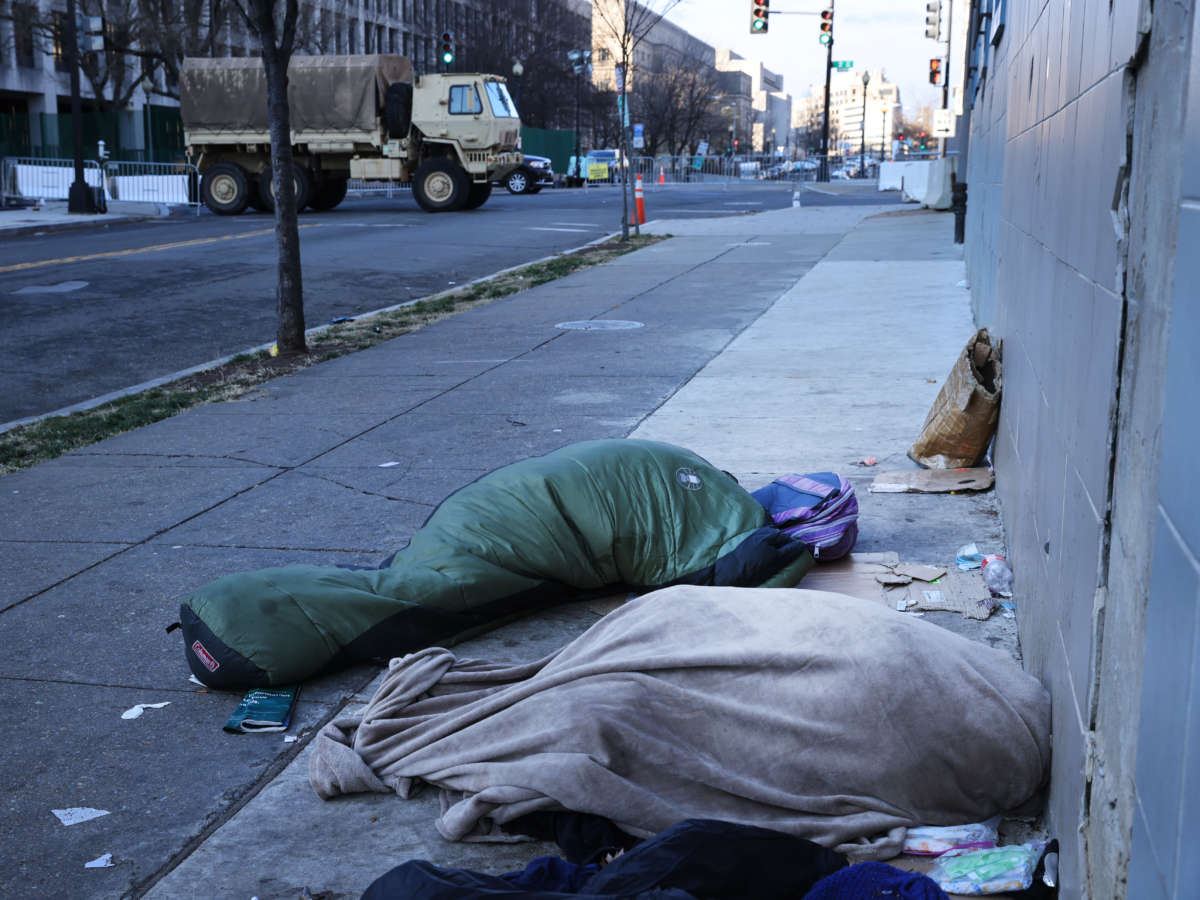 Homeless individuals sleep near a National Guard truck ahead of the inauguration of U.S. President-elect Joe Biden on Jan. 20, 2021, in Washington, D.C.
Image credit: Spencer Platt

The nation’s homeless population grew last year for the fourth year in a row. On a single night in January 2020, there were more than 580,000 individuals who were homeless in the United States, a 2% increase from the year before.

The numbers, released by the Department of Housing and Urban Development today, do not reflect the impact of the pandemic.

“And we know the pandemic has only made the homelessness crisis worse,” HUD Secretary Marcia Fudge said in a video message accompanying the report. She called the numbers “devastating” and said the nation has a “moral responsibility to end homelessness.”

Among the report’s more sobering findings: homelessness among veterans and families did not improve for the first time in many years.

Also, more than 106,000 children were homeless during the once-a-year count, conducted in most communities across the nation. While the majority of homeless children were in shelters or transitional housing, almost 11,000 were living outside.

As has been the case for years, a disproportionate share of those experiencing homelessness were Black — about 39% of the total, though African Americans make up about 13% of the nation’s overall population. Twenty-three percent of those who were homeless last year identified as Hispanic or Latino.

California was home to the largest number of people experiencing homelessness — 161,548 — according to the 2020 count. A quarter of all homeless individuals in the United States were living in either New York City or Los Angeles.

For the first time since the government began doing the annual count, the number of single adults living outside — 209,413 — exceeded the number of individuals living in shelters — 199,478.

“I think it’s tragic that we have increasing unsheltered numbers,” said Nan Roman, president and CEO of the National Alliance to End Homelessness. “We know that unsheltered people have horrible health conditions.” Roman noted that these individuals are much more susceptible to disease and premature death than those living inside.

Adding to the concern of housing advocates are signs that many more individuals have moved outside since the count was conducted because of the pandemic.

Some individuals have been worried about contracting COVID-19 staying inside, and many shelters have been forced to limit bed space to meet health and safety protocols. This has led to an increase in street homelessness in communities that were unable to provide alternative housing, although some have taken advantage of hotel space left empty during the pandemic.

Becky Gligo, executive director of Housing Solutions Tulsa, said her Oklahoma county raised money to move more than 400 unsheltered individuals into a hotel or other housing after a major storm hit the area this winter, leaving fewer than a dozen people on the streets.

“The pandemic has been incredibly hard on everybody for so many reasons. But in some ways, it’s really fast-tracked things that we thought would take five, 10 years to get the funding and intention for,” Gligo said.

Other providers have also seen what they describe as a silver lining to the pandemic.

John Mendez, executive director of Bethesda Cares, a service provider in Montgomery County, Md., said his group was able to permanently house some individuals who had lived outside for more than a decade and refused to accept assistance until last year.

“Many of them were very scared of what could happen,” Mendez said. “It was very desolate.”

Streets that were usually bustling were suddenly empty. Conveniences, such as bathroom facilities, were no longer available. “By the end of April, they were open to talking about housing for the first time,” he said.

Still concerns have grown about what might lie ahead.

“I think we’re going to see homelessness increase,” said Sean Read, chief program officer at Friendship Place, a nonprofit that serves homeless individuals in Washington, D.C. Homelessness is “generally a delayed response” to economic setbacks, Read noted. Families that have been able to hold on to housing during the pandemic, with the help of government aid and eviction moratoriums, could find themselves out of luck in the coming year.

Read and other providers are hopeful that billions of dollars in housing aid included in a recent $1.9 trillion COVID relief package will go a long way toward alleviating the crisis.

The amount of aid is unprecedented. The bill provides $5 billion in homelessness assistance, more than $20 billion in emergency rental aid and $5 billion in new housing vouchers.

Roman, of the National Alliance to End Homelessness, noted that the measure also includes direct payments for families, which could keep many in their homes. She said some communities are also planning to use the funds to buy empty hotels that can be used to house more individuals, both temporarily and permanently.

“It’s such a huge opportunity at the moment,” Roman said. “The question is are we going to be able to seize it.”