Hubble’s 1995 image of a star nursery was amazing. Take a look at NASA’s new version 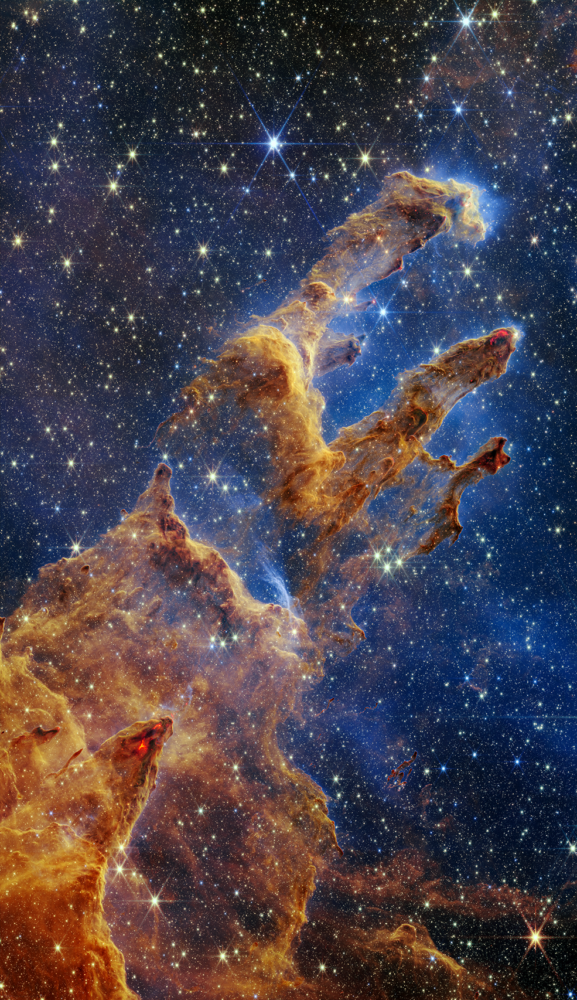 The Pillars of Creation as captured by NASA's James Webb Space Telescope look like arches and spires and are filled with semi-transparent gas and dust. This is a region where young stars are forming.

Nearly 30 years ago, NASA’s Hubble Space Telescope captured the first image of the Pillars of Creation — the iconic star nursery featuring thick pillars of gas and dust. Now, the new James Webb Space Telescope has captured NASA’s most detailed image of the landscape that is helping scientists better understand how stars form.

The James Webb telescope, billed as the successor to the aging Hubble, is optimized to see near- and mid-infrared light invisible to people, allowing it to peer through dust that can obscure stars and other objects in Hubble images. While James Webb’s infrared eyes were not able to pierce through a mix of gas and dust in the Pillars of Creation, its new view will help scientists identify more precise counts of newly formed stars, and the amount of gas and dust in the region.

Klaus Pontoppidan, a project scientist working on the James Webb, wrote on Twitter that the team wanted to capture the Pillars of Creation using the new space telescope after seeing popular demand for it.

“The nebula, M16, is located right in the plane of the Milky Way; there are just so many stars!” Pontoppidan wrote. “This image was taken in exactly the same way as the cosmic cliffs, and covers an area the same size on the sky.”

Kirsten Banks, an astrophysicist and science communicator, praised James Webb for revisiting the Pillars of Creation and giving scientists more precise data to learn from about the formation of stars.

“Not only are there obvious stars speckled in every nook and cranny of this image, but if you look closely at the tips of the pillars, you can see this fiery redness,” Banks said in a Twitter video. “It looks like a volcano spitting lava.”

The red spots at the edges of some pillars come from young stars, estimated to be a few hundred thousand years old, that shoot out supersonic jets which excite surrounding hydrogen molecules and create the crimson glow.

Before James Webb’s success, the telescope had to endure more than 20 years of technical difficulties, cost overruns, delays, and threats from Congress to kill it altogether. Critics were skeptical of its large size, the Webb’s primary mirror boasting six times more light collecting area than that of the Hubble.