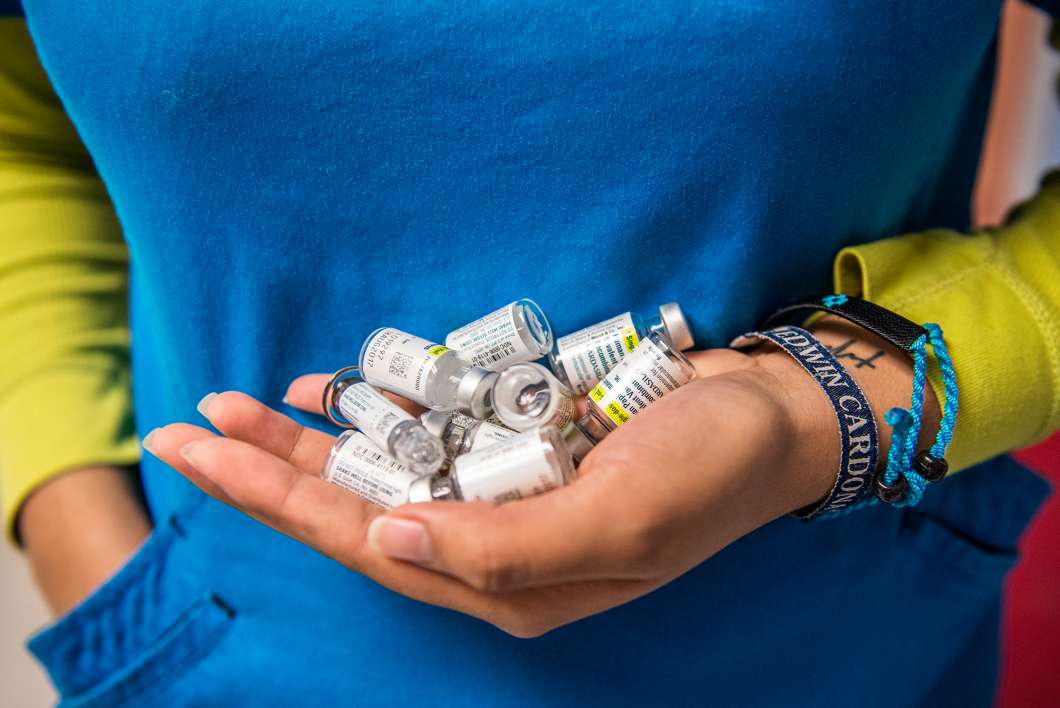 Vials of the HPV vaccination drug Gardasil. Doctors and public health experts say the new version of the vaccine could protect more people against cancer.

You’d think that a vaccine that protects people against more than a half dozen types of cancer would have patients lining up to get it. But the human papillomavirus (HPV) vaccine, which can prevent roughly 90 percent of all cervical cancers as well as other cancers and sexually transmitted infections caused by the virus, has faced an uphill climb since its introduction more than a decade ago.

Now, with a dosing schedule that requires fewer shots of a more effective vaccine, a leading oncology group has joined other clinicians and public health advocates who are pushing hard to prevent these virus-related cancers.

Last year, the Centers for Disease Control and Prevention’s Advisory Committee on Immunization Practices recommended reducing the number of HPV vaccine shots from three to two for girls and boys between the ages of 9 and 14.

This month, the American Society of Clinical Oncologists also urged physicians in the U.S. and abroad to use the vaccine to help provide protection against cervical cancer.

The CDC recommendation was based, in part, on clinical trial data that showed two doses were just as effective as a three-dose regimen for this age group. (Young people older than 14 still require three shots.)

The clinical trial was conducted using Gardasil 9, a version of the vaccine approved by the Food and Drug Administration in late 2014. It protects against nine types of HPV, seven that are responsible for 90 percent of cervical cancers and two that account for 90 percent of genital warts.

In addition, the improved version of Gardasil increases protection against HPV-related cancers in the vagina, vulva, penis, anus, rectum and oropharynx, which is the tongue and tonsil area at the back of the throat.

An earlier version of the vaccine protected against four types of HPV.

From the start, clinicians have run into some parental and political roadblocks because the vaccine, which is recommended for preteens, protects against genital human papillomavirus, a virus that is transmitted through sexual contact. Many physicians are reluctant about discussing the need for the vaccine, and for many parents, the vaccine’s cancer-prevention benefits have been overshadowed by concerns about discussing sexual matters with young kids.

Yet, for maximum protection, the immunizations should be given before girls and boys become sexually active.

The focus should not have been on sexually transmitted infections, some say. “You only get one chance to make a first impression,” said Dr. H. Cody Meissner, a professor of pediatrics at Tufts University School of Medicine and a member of the American Academy of Pediatrics’ committee on infectious diseases.

“This vaccine should have been introduced as a vaccine that will prevent cancer, not sexually transmitted infections,” Meissner says.

The HPV virus is incredibly common. At any given time, nearly 80 million Americans are infected, and most people can expect to contract HPV at some point in their lives. Most never know they’ve been infected and have no symptoms. Some people develop genital warts, but the infection generally goes away on its own.

A 2015 study published in the Journal of the National Cancer Institute estimated that earlier versions of the HPV vaccine could reduce the number of HPV-related cancers by nearly 25,000 annually.

The new vaccine is estimated to prevent 5,000 cancer deaths annually, according to Dr. Paul Offit, professor of pediatrics and director of the Vaccine Education Center at the Children’s Hospital of Philadelphia.

But compliance is an ongoing problem. “They’re not getting the one vaccine that protects against diseases from which they’re most likely to suffer and die,” Offit said, noting that deaths from pertussis and meningococcal disease, for which adolescents are also vaccinated at that age, are minuscule compared with HPV-related cancers.

In 2015, 87 percent of 13-year-olds were up-to-date with the Tdap vaccine that protects against tetanus, diphtheria and pertussis, and 80 percent had received the meningococcal vaccine, according to the CDC. But just 30 percent of girls and 25 percent of boys at that age had received all three doses of the HPV vaccine. In contrast to other vaccines, however, the HPV vaccine is only required in a few states for secondary school students.

Public health advocates say they think the shift to a two-dose regimen could make a big difference for parents, as well as kids.

Because the second HPV shot is supposed to be given anywhere from six months to a year after the first one, “parents can fit it into a routine regimen when people go in for their 12-year-old’s regularly scheduled visit,” said Dr. Joseph Bocchini Jr., chairman of pediatrics at Louisiana State University Health in Shreveport, La. He’s also president-elect of the National Foundation for Infectious Diseases.