How Will History Judge Trump’s Impeachment? It Won’t Just Be Decided On Election Day 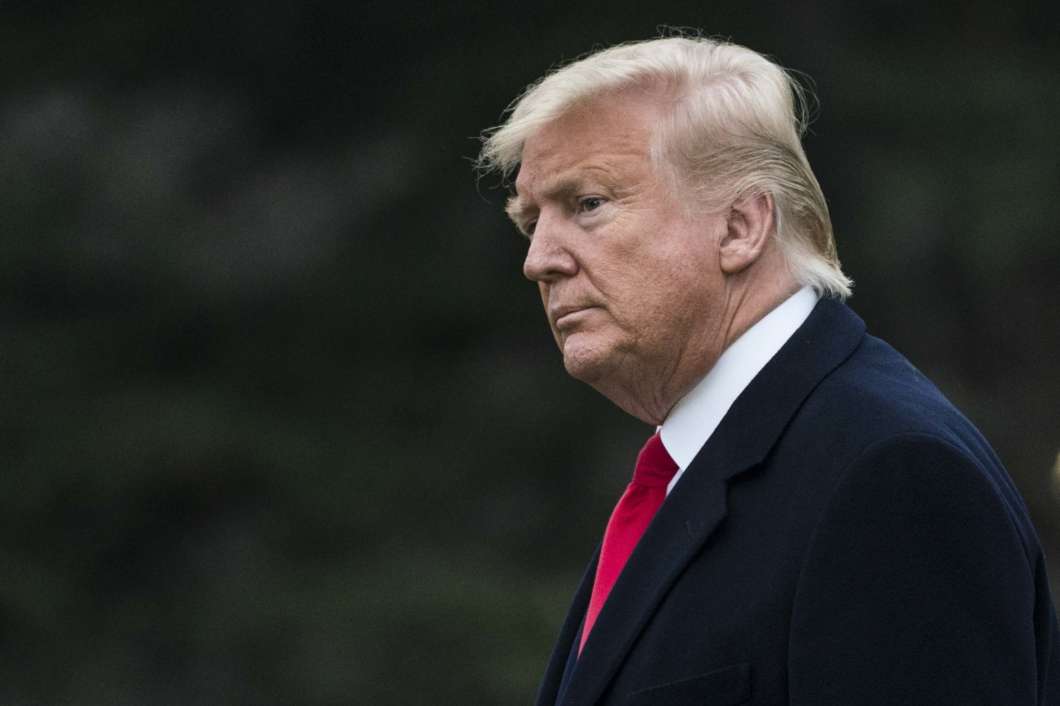 President Trump is the first president to face the voters after being impeached. Of course, when the voters finally have their say in November, they will be weighing not only the impeachment issue but a host of others.
Image credit: Sarah Silbiger

We can look only to three previous cases of presidential impeachment or resignation in American history, each quite different. But taken together, they indicate just how much the judgment of history may diverge from the initial political impact.

In the Trump case, much will depend on what transpires in the next nine months, and especially in the first week of November. As has been widely and often noted, Trump is the first president to face the voters after being impeached.

That prospect — an Election Day verdict — was more or less the closing argument offered by the president’s defenders in the impeachment struggle just concluded: Why not let the voters decide whether the president had disqualified himself for his office?

Of course, when the voters finally have their say in November, they will be weighing not only the impeachment issue but a host of others. By then, the Ukraine affair and all that followed might well seem like old news. And considering the modest boost the president seems to have enjoyed in February polling, impeachment might tilt the scales in his favor.

Moreover, American elections tend to be framed as a binary choice between the nominees of the two parties. Thus the voters’ reelection decision reflects their assessment of the incumbent and the opposition candidate (or candidates) — as well as the relative strength of the major parties.

So November’s voters will not be making a clean judgment on the stand-alone question of impeachment — that could only have come from the Senate. November will be about many things besides that.

Yet even if the president wins a second term, as most presidents seeking reelection do, the judgment of history will not be complete. Information will continue to reach the public, casting new light on the events that led the House to impeach Trump in 2019. Indeed, potentially cogent evidence was reaching the public even as the Senate was voting not to call witnesses or review new documents.

Most salient in that respect was the news that John Bolton, the former national security adviser, would confirm key elements of the impeachment case in his own forthcoming book. The Justice Department has also said it is withholding presidential emails that could shed light on why military aid to Ukraine was delayed.

Within 48 hours of his acquittal, the president was removing from his administration the witnesses who had illuminated his dealings with Ukraine during open hearings in the House last fall. Lt. Col. Alexander Vindman and Ambassador to the European Union Gordon Sondland were sent packing, as was Vindman’s twin brother. Both Vindmans worked for the National Security Agency in the White House.

Will the purge halt the hemorrhage of damaging inside information? Or will new and unforeseen events continue to reveal more about the Ukraine episode and those who played a part in it? Any such revelations, and Trump’s reaction to them, could color assessments of his presidency overall — and might even alter assessments of the House’s effort to remove him.

If there is a second Trump term that is distinguished by soaring national success, the impeachment saga will shrink into insignificance and be largely forgotten. It may even become the permanent black mark against the Democratic Party that Trump wants it to be.

If things go the other way, as they did for President George W. Bush in his second term, the Democrats’ abortive effort to short-circuit the Trump presidency will look a lot better — perhaps even prescient. In that event, the Senate vote to acquit will look like a classic missed opportunity.

Total vindication or something else?

In the current moment, the Senate’s resounding rejection of impeachment plays as vindication. The president has called it a “full vindication and exoneration.” He will no doubt continue to treat it and trumpet it as such. His supporters in Congress, the media and the general electorate will do the same.

There is a certain reversal of momentum at work here. Trump’s impeachment process had begun with relatively robust support from the public. A survey for CBS News found 55% of the country supporting at least the first stage of the inquiry in late September.

That support has tracked with the consistently high percentage of voters telling pollsters they disapproved of Trump’s performance in office. In January, polls by Quinnipiac University and Fox News (among others) found support for the House’s impeachment vote slightly above 50% and support for actually removing Trump from office slightly under 50%.

That was not the case with President Bill Clinton. His removal was never supported by more than 30% in the Gallup Poll, and his job approval numbers actually went up throughout the process.

A generation earlier, Congress began its investigations of President Richard Nixon in the summer of 1973 with polls showing only about a quarter of the country supporting his removal. That percentage rose slowly over the next year but did not reach 50% until the final weeks before his resignation in August of 1974.

The only other impeachment in U.S. history came long before scientific polling began. Congress tried to remove President Andrew Johnson in 1868, and public awareness of that process at the time was relatively limited. Public opinion was also divided by region and party, coming just three years after the Civil War. Johnson was a Tennessee Democrat who had opposed his state’s decision to secede in 1861. He was elected on a bipartisan unity ticket with President Abraham Lincoln in 1864 and became president when Lincoln was assassinated the following year.

So only the Nixon and Clinton examples seem relevant today, and we do not know how either might bear on Trump’s case — especially not on the judgment of history after the passage of years or decades.

Nixon sank in the public’s esteem even while still in office. While Americans were reluctant about removing him from office, his approval number in the Gallup plummeted from the mid-50s to the mid-20s over the 18 months of his abbreviated second term. Some of that was attributable to the Watergate scandal, of course, but some also to the sharp increase in oil and gas prices and general inflation rates in 1973 and 1974.

In stark contrast, Clinton’s approval rating in the Gallup Poll rose even as damning evidence of his affair with a White House intern emerged and the impeachment case against him advanced. Many were astonished that, right after the Senate acquitted him, his approval rating briefly topped 70%.

Trump’s polling has fallen in between these two historic poles. His approval rating has remained close to the range it has been in since he took office, from a low just below 40 to a high just below 50. Most of the time, in most polls, he has been in the low-to-mid-40s. He got a notable bump in the Gallup in the week he was acquitted by the Senate, but remained just under 50% — on the low side for incumbent presidents entering their re-election year.

Today, the 1868 effort to remove Johnson (ostensibly for firing his secretary of war against the wishes of Congress) appears rather petty in retrospect, and the senator who cast the crucial vote to acquit him is featured as a hero in Profiles in Courage, the Pulitzer Prize-winning book authored in the 1950s by a future president, John F. Kennedy.

Johnson is a rather marginal historical figure, an accidental president who was subsumed in the divisions and partisan rancor of his day. He ranked 40th among all presidents in one recent survey of 200 political scientists by the American Political Science Association’s presidential studies section.

The impeachment of Nixon is now often remembered as a model of bipartisan cooperation and national unity. But that characterization itself is disputed by many conservatives, who thought Nixon was pilloried unfairly for campaign skulduggery no worse than that of some of his predecessors.

One unintended consequence of the Nixon story was the subsequent career of his campaign media man, Roger Ailes, who went on to make highly successful campaign ads for President Ronald Reagan and to advise the successful campaign of Reagan’s successor, George H.W. Bush. Next, Ailes would create the Fox News Channel with the support of media mogul Rupert Murdoch — who shared Ailes’ enthusiasm for a frankly conservative alternative to the liberal point of view they saw in the broadcast networks (ABC, CBS and NBC).

Fox has become the most-watched news on cable and a dominant force in conservative politics. As such, it has been an asset and an ally for Trump, prompting commentators on both sides to wonder whether Nixon would have had to leave office in 1974 had there been a Fox News to defend him at the time.

Looked at another way, Nixon might have survived if his approval rating had not sunk so badly — battered by the circumstances noted above. Clinton benefited from the opposite set of circumstances as his second-term economy featured strong growth and a booming stock market — thanks in large part to the personal computer and the dot-com boom. Had he been eligible, he might plausibly have ridden the long stretch of good economic numbers to a third term in 2000.

Nixon today is remembered as much for his scandals as for his 49-state reelection landslide and historic diplomatic breakthroughs with China and Russia. The APSA survey cited above ranks him in the lowest one-third of presidents.

Clinton has fared rather better in the popular memory, buoyed by his bipartisan post-presidential public activities and perhaps also by comparison with some of his successors. The APSA survey had him in the top 20 U.S. presidents.

Where Trump will land on such lists in the long run will depend on many factors, including events yet to take place. In the end, it is likely those other factors and as-yet-unknown events will outweigh impeachment in the scales of historic judgment.