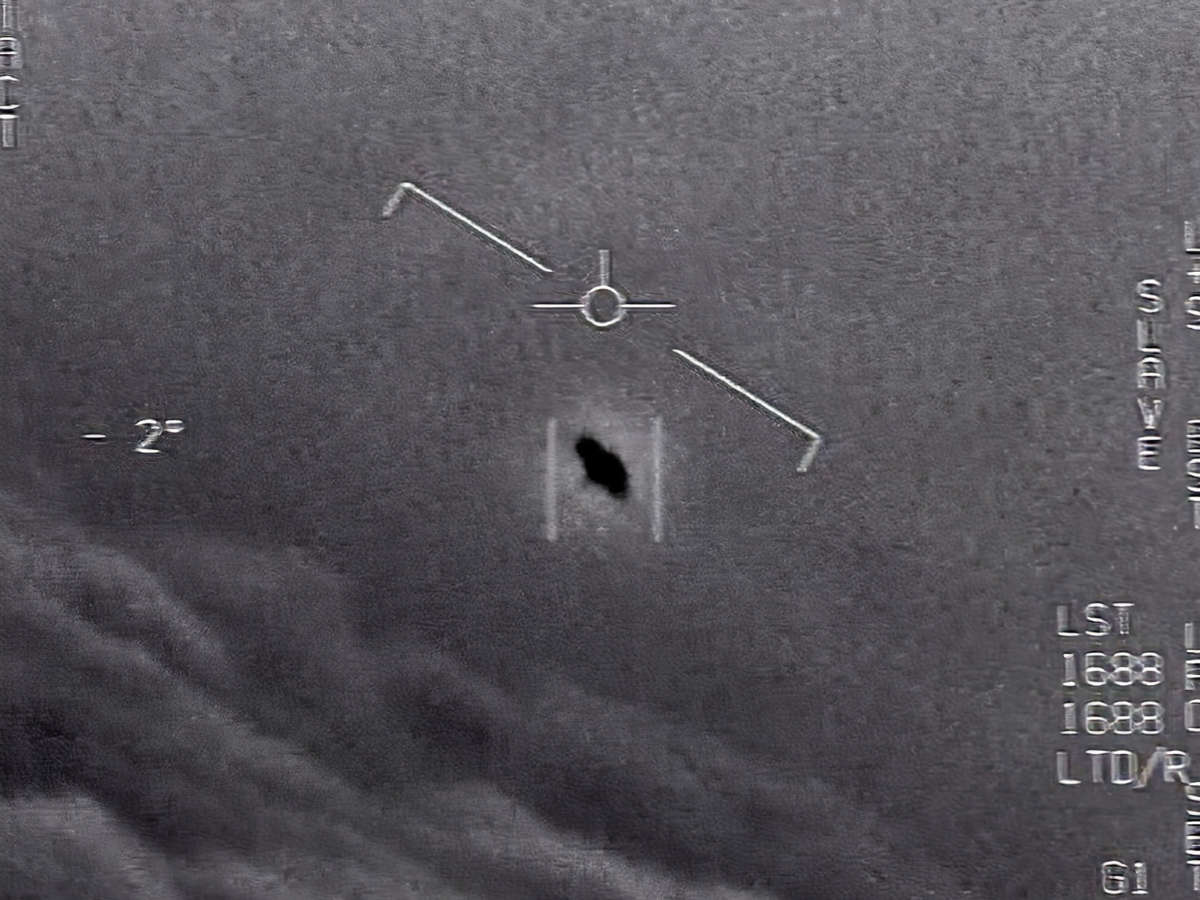 In an image from video footage from 2015, an unexplained object is seen at center as it soars among the clouds, traveling against the wind. "There's a whole fleet of them," a naval aviator tells another, though only one indistinct object is shown.

Are we alone? Have alien spacecraft been buzzing across Earth’s skies? Those are the questions being asked in the U.S. government’s new report on unexplained aerial phenomena — its preferred term for what many of us call unidentified flying objects, or UFOs.

So far, it looks like the answers in the report will leave UFO spotters and conspiracy theorists unsatisfied. U.S. officials and analysts who examined video footage from U.S. Navy planes and other records say the evidence doesn’t point to alien technology — but they also say they can’t explain the unusual phenomena.

The report’s release is still pending; after The New York Times first reported news of its findings Thursday night, a senior U.S. official confirmed to NPR that details in the newspaper’s story are accurate.

Intelligence officials: The airborne vehicles weren’t made by the U.S.

One of the report’s only substantial conclusions is that the craft encountered by the military — objects that showed unusual flight capabilities — were not created by classified programs run by the U.S. government or the Pentagon.

That finding jibes with statements previously made by Luis Elizondo, the former leader of the Pentagon’s Advanced Aerospace Threat Identification Program. He spoke to NPR in 2017 after the release of a previously classified video taken by a camera aboard a U.S. Navy F/A-18 Super Hornet.

In the footage, pilots struggled to explain what they were seeing as an object on their sensors maintained a high speed — and then, for no apparent reason, rotated.

“Look at that thing!” one pilot exclaimed.

Earlier, the same pilot remarked they might be seeing some type of drone.

“There’s a whole fleet of them,” the other pilot said.

“My gosh!” the first pilot replied.

Discussing that footage in an interview with NPR, Elizondo confessed he didn’t know the origin of the craft.

“If you’re asking my personal opinion from here, look, I’ve got to be honest with you, I don’t know where it’s from. But we’re pretty sure it’s not here,” Elizondo said. “Now does that mean it’s ‘out there’? Whether or not it’s Russian or Chinese inside or little green men from Mars or frankly your neighbor’s dog, I wanted to purposely steer away from that because I wanted to focus on truly the raw science: What were we seeing, and did it pose a threat to national security?”

Interest in the idea that alien beings might be visiting Earth from off-planet has skyrocketed in recent years, particularly after the Pentagon verified that several videos showing what look to be objects moving at incredible speeds and with remarkable agility had indeed come from official U.S. Navy sources.

In 2017, news of the existence of a secretive Pentagon program that was established to examine sightings of unexplained aircraft and phenomena ignited public interest. It also brought new legitimacy and definition to an area of research that for decades was defined by speculation — and stereotypes of UFO enthusiasts running around in tinfoil hats.

The Pentagon reportedly began its Advanced Aerospace Threat Identification Program in an early form in 2007. Congress then funded it, and Elizondo took it over in 2010. But the Defense Department halted it in 2012.

In April 2020, the Department of Defense officially released footage from the Navy fighter pilots’ on-board cameras.

The department said it was releasing the videos to clear up misconceptions about whether footage that had already been circulating is real.

“The aerial phenomena observed in the videos remain characterized as ‘unidentified,’ ” the Defense Department said.

Americans, it seems, are ready to believe. A 2019 Gallup Poll found that a third of U.S. adults agreed with the idea that “some UFOs have been alien spacecraft visiting Earth from other planets or galaxies.”

Why the government report is coming out now

The new report on UFOs is poised to be released to Congress this month by the Office of the Director of National Intelligence.

U.S. intelligence agencies and the Defense Department are required to report on what they know about unusual aerial phenomena because of a stipulation in the massive COVID-19 relief and government funding bill that Congress approved last year.

In a section titled Advanced Aerial Threats, the spending bill calls for federal agencies to submit a report on “unidentified aerial phenomena (also known as ‘anomalous aerial vehicles’), including observed airborne objects that have not been identified.”

When former President Donald Trump signed the bill on Dec. 27, he also triggered the start of a 180-day deadline for the director of national intelligence to send the report to Congress.

The report will go to the Intelligence and Armed Services committees in each chamber of Congress.

We’ve been looking for aliens for decades

Speculation about extraterrestrial beings coming to Earth — and potentially colonizing our planet, as humans have done to one another for millenniums — has long been fuel for movies and pulp novels. But fiction or not, the military has also been intrigued by the idea.

Americans’ fixation with UFOs has its roots in July 1947. According to UFO enthusiasts, that’s when the U.S. Air Force allegedly recovered an alien spacecraft — and its occupants — near Roswell, N.M.

As with more recent efforts, the U.S. military worked to determine whether an alien force had arrived on our planet — or whether the sightings potentially indicated unexpected gains in aeronautics and engineering by some rival power.

“The UFO craze began in the summer of 1947,” journalist Annie Jacobsen told NPR in 2011 when she published a book about the mysterious Area 51 in Nevada. As speculation about that incident grew, Jacobsen added, the Army intelligence corps went on a search for former Third Reich aerospace designers who were said to have created a flying disc.

That same year, the Air Force started a program to investigate UFO sightings, called Project BLUE BOOK. Over the next two decades, 12,618 strange sightings were reported to the project. When it was phased out in 1969, around 700 sightings were still categorized as “Unidentified,” according to the National Archives.