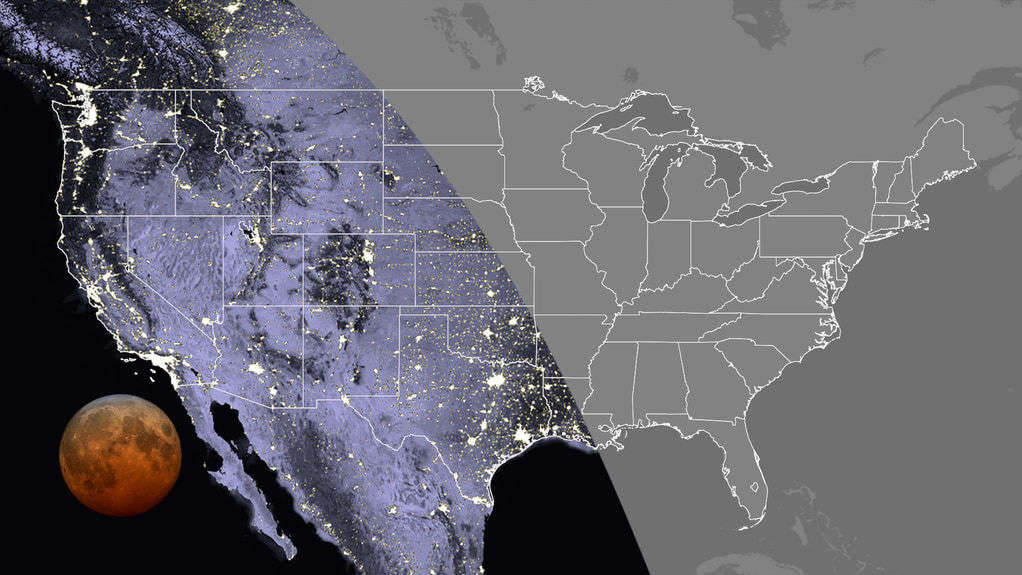 Visibility of the total phase in the contiguous U.S., at 7:11 a.m. ET. Totality can be seen everywhere in the Pacific and Mountain time zones, along with Texas, Oklahoma, western Kansas, Hawaii and Alaska.

Watchers of the night sky are in for a treat this week with the arrival of what has been dubbed a Super Flower Blood Moon.

The lengthy name is the result of a few astronomical phenomena coming together at once. The supermoon will be visible all over the world, and the full lunar eclipse will be visible in many parts of the world, including the western United States.

Early risers in the U.S. can catch a spectacular view of the moon Wednesday morning before sunrise, but what you’ll be able to see will depend largely on where you live.

Why it’s “super”: The shape of the moon’s orbit around the Earth is not a perfect circle, but an oval. When a full moon reaches the point closest to our planet on its elliptical orbit, it’s called a supermoon, or perigee-syzygy, and appears larger than usual in the sky.

Why it’s “flower”: Full moons that occur in May are sometimes known as flower moons. According to The Old Farmer’s Almanac, the name is a reference to the flowers that are blooming in May and has been attributed to Native American, Colonial American and European sources.

Why it’s “blood”: On Wednesday morning, the moon will also appear blood red as it aligns with the sun and Earth and passes fully into Earth’s shadow, or umbra. This will be the first total lunar eclipse since 2019. The moon’s red hue is caused by red-orange light refracted through Earth’s atmosphere and can appear even redder if there are more clouds or dust in Earth’s atmosphere, according to NASA.

The biggest draw of this celestial event is that a supermoon and a total lunar eclipse are occurring simultaneously. In the past 10 years, there have been just nine total lunar eclipses. Supermoons are more common — they typically occur several times a year.

How to see it: Fortunately, anyone will be able to see the supermoon as long as the sky is clear where they are, NASA says.

But whether you can see the total lunar eclipse — when the moon will turn a blood red — is another story.

Stargazers in the western U.S. and Canada, as well as most of Central America and parts of South America, will be able to see the total lunar eclipse starting around 7:11 a.m. Eastern time (that’s 5:11 a.m. Mountain time and 4:11 a.m. on the West Coast).

The total lunar eclipse will last about 15 minutes.

Those on the East Coast will miss the full blood moon, but you may still be able to catch a partial lunar eclipse starting around 5:45 a.m. ET. It won’t be visible in New England parts of New York, Pennsylvania and Delaware.

Take a look at this animation from NASA to see what time the eclipse will be visible based on your location:

“You only need your eyes to see the drama unfold, but if you have binoculars or a backyard telescope, they’ll give a much-enhanced view,” said Diana Hannikainen, observing editor at Sky & Telescope.

And if you want to catch the full Super Flower Blood Moon but can’t in person where you are, several livestreams will be hosted by observatories and astronomers around the world.

Hannikainen said those who miss Wednesday’s eclipse shouldn’t despair — they’ll be able to catch another one on the night of Nov. 18 to 19.

“Technically, the November event will be partial, but only the thinnest sliver of the Moon’s disk will remain outside the umbra, so for all intents and purposes it’ll be very much like a total eclipse,” she said in a statement.