How To Stay Safe When You Work Out In The Heat 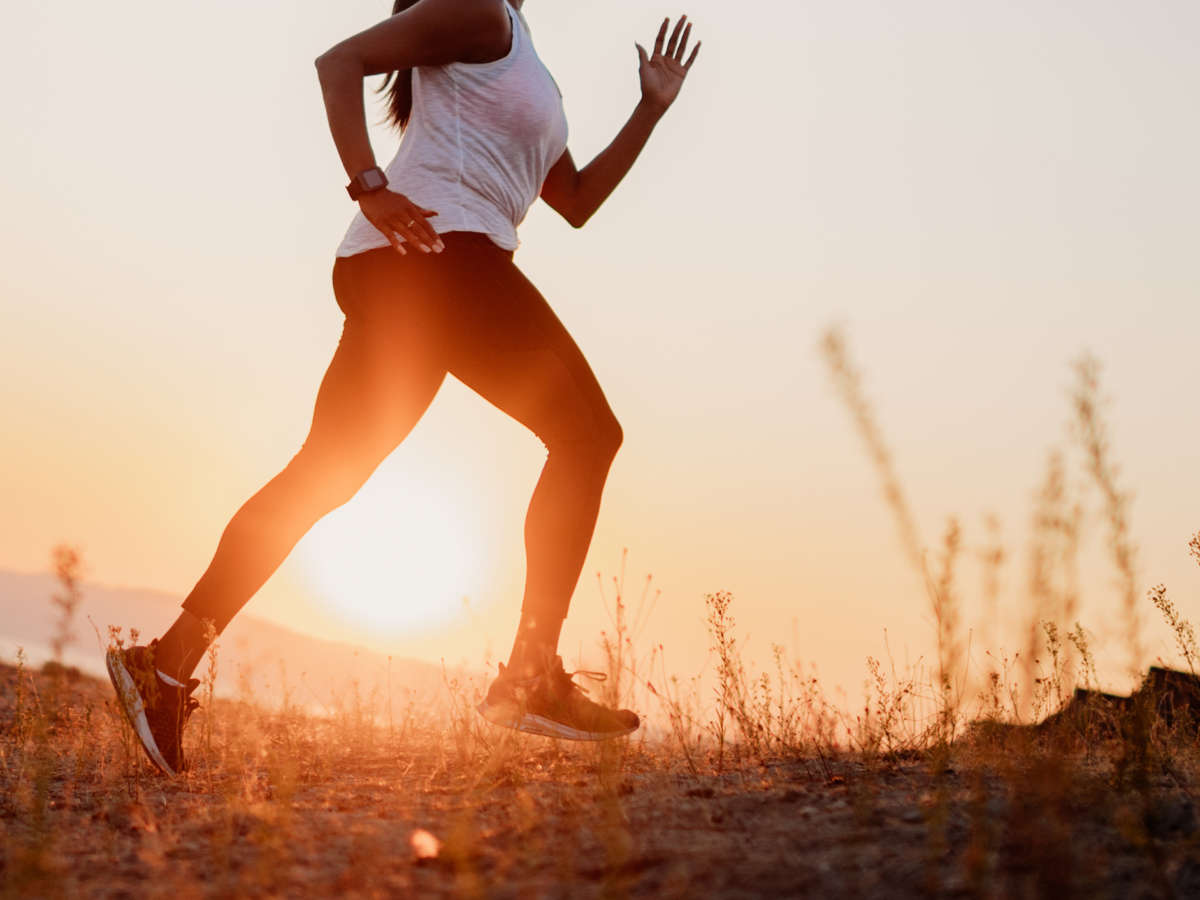 When working out in the summer, watch for the signs of dehydration and heat stroke. Choosing a later evening or early morning time for a run in one smart way to stay safe.
Image credit: RyanJLane

Treadmill fatigue is real. That’s why at the first hints of spring many indoor exercisers are outside faster than you can say manual or hills program. But when summer hits, some regions get hot — really hot.

And this year, as climate change continues to push Earth’s weather to extremes, entire swaths of the U.S. have experienced record-breaking levels of heat.

So, what’s an exerciser who can’t face heading back indoors to do? Yeah, yeah, get up earlier to beat the heat — thanks for the advice, early birds. But let’s get real: For some of us, that just isn’t going to happen. Work, kids, and our desperate cling to sleep — all get in the way.

So, is that lunchtime run or bike ride in 95-degree weather OK for our bodies? Or are we risking heat exhaustion or — even worse — heat stroke (there’s a big difference, as we’ll get into further down).

The short answer is yes, you can safely exercise when it’s hot. But you have to tread (or hike or jog) carefully.

We asked two specialists in heat and exercise — Carol Ewing Garber, professor of movement science at Columbia University and Dr. Matt Leonard, attending emergency physician at Suburban Hospital, Johns Hopkins School of Medicine (both regular exercisers) — to discuss the science behind exercising in the heat, how to keep your body safe, and what to do if you suspect you or someone you’re with has heat exhaustion or heat stroke.

1. Don’t eat right before you head out

Wait, what? Doesn’t our body need fuel to move? Yes, that’s true, say Garber. A light meal is a great idea — just put an hour between eating and your workout in the heat. “It takes blood and energy to your gut to digest the food and that makes more body heat — not what you want when you’re already hot,” she explains. If you had a heavy meal like a cheeseburger, she says, you’ll want to wait two to three hours before your hot outdoor exercise, since that fat- and protein-rich meal will take even longer to move through the digestive process.

So should you eat after that hot run? No, Garber advises. Hydrate right away, but wait until you’ve cooled off to eat, since digesting food will delay getting your body back to its usual temperature.

The skin is an “amazing self-cooling apparatus,” says Leonard. “Your skin and subcutaneous tissues are incredibly designed to move warm blood away from your core to keep your vital organs cool. Any damage to your skin or the underlying tissue prevents your body from being able to air condition itself.”

To protect your skin, start with sunscreen, he says. And consider wearing loose, lightweight clothing that blocks the sun, and include a hat. “The head has a large body surface area for cooling, and a hat provides shade so that area stays cool,” he says.

The other reason to protect your skin is to avoid cancer, Leonard adds. “That’s a great longer-term benefit.”

3. Wear material that will help your body breathe

The type of protective clothing you wear can also help you stay cool, says Leonard. “Wear sweat-wicking athletic clothing that allows your skin to perspire and cool,” he says, “and avoid materials like cotton that basically keep the heat close to your body.” Useful clothes needn’t be fancy; inexpensive sportswear designed to wick sweat from your skin can be found at most major retailers.

Garber agrees that breathable clothing is important in hot weather, but says exposing more skin (as long as you also wear sunscreen, and avoid the brightest hours of the day) can be helpful, too. “Exercise clothes have gotten smaller and smaller,” Garber says with a laugh, “which is actually good for high temperatures because the more skin you have exposed to the atmosphere the easier it is for sweat to evaporate.”

4. Hydrate before, during and after exercise

Dehydration can really sneak up on you, says Garber. The best defense against dehydration is a good offense. “Make sure you are drinking water at least an hour before you head out to exercise,” she says, adding to keep drinking while you’re working out (Leonard says it’s important to start getting hydrated even the night before). Garber recommends replenishing what’s lost during your workout by drinking somewhere between a half liter to a liter for every hour you’re exercising in the heat.

And what should you be drinking? “If you’re working out for an hour or less, nice cold water is the best choice because it is absorbed pretty quickly. If you’re going to be at it longer than that, then consider a sports drink to replenish sodium and electrolytes.”

How do you know if you’re dehydrated? “Check the color of your urine,” says Leonard. “That’s the best gauge for internal status.” Leonard says your pee should be close to clear and not deeply yellow or brown. He says to also take note how often you have to pee. Haven’t had to go in a bit? That may be a sign you’re dehydrated.

Leonard also warns about going overboard on the water which can lead to a condition called hyponatremia. “You see this in athletic events where competitors are excessively hydrating with electrolyte deficient sources like water, and that can lead to seizures, cardiovascular collapse and brain swelling.”

Garber says that while she loves hiking and running, when it gets hot, she opts for sports that her body can handle a bit easier in the heat. “If the water is cool, swimming is a great choice on hot days and a good way to manage heat in general, because your body is stressed from heat even if you’re not exercising.” Yoga is also a good alternative, she says, because it is really beneficial from a fitness standpoint but doesn’t take quite as much energy as running or riding your bike.

6. Switch locations or times of day

Both Leonard and Garber say that one of the simplest ways to keep your body temperature at a reasonable level when you’re exercising on a hot summer day is to go out earlier in the morning than you might in other seasons, or later in the evening, when the air temperature is cooler.

“That midday sun can add as much as 20 degrees or more to the actual air temperature,” says Garber. “You really have to be careful about that.”

If you’re set on that noon run, at least consider moving your normal run in the sun to a shadier route where you can stay cooler easier, says Garber.

7. Know the difference between dry and humid heat and take that extra water vapor into account

A dry heat is easier on your body, says Garber. “Your sweat is able to evaporate in a dry heat, and you are better able to keep your body temperature in that normal, healthy range.”

But high outside temperatures in a dry climate can also be dangerous. “Because your sweat is evaporating so quickly (and you don’t have a soaked shirt) you often won’t realize how much water your body has used,” Garber says. “You don’t have that cue and can become dehydrated.”

In humid areas, it’s easier to tell how much water you’re using because you’re probably sweating at least some — but high humidity carries its own risks. “It’s harder in humid areas for your sweat to evaporate and that really impairs your body’s ability to cool yourself off,” she says. “If you’re soaked in sweat, think of that as a reminder to your body that it is not able to cool itself as well and to be careful.”

8. Ease up in the heat and acknowledge your limits

When you exercise even in perfect conditions, there’s a lot of competition among different body parts for oxygenated blood, says Garber.

“Your body is trying to send blood to your heart to keep it moving and to your skin to cool you down and to the area of the body you’re exercising,” she explains. “And you only have about five liters of blood, so it can really put a stress on your cardiovascular system. That’s on a good day.”

Adding high heat to that mix puts a whole other layer of stress on your body, Garber says, so please slow down if you need to.

“It’s perfectly fine to back off a bit when you’re trying to exercise in that heat,” she says, “and particularly important if you have heart disease, diabetes, or any chronic disease. It really puts so much strain on your heart that it could make something terrible happen — like a heart attack.”

Along with those with preexisting conditions, children, and the elderly — particularly if they’re not regularly active — need to be especially careful when exercising in heat, both Garber and Leonard emphasize, because their ability to regulate their body temperature is less efficient.

9. Know the warning signs of heatstroke and heat exhaustion, and what to do

The warning signs for heatstroke (a much more serious emergency, Leonard notes) include all the above but also confusion, vomiting, seizures, cardiovascular collapse or passing out and a lack of sweating.

The first step to help anyone who exhibits symptoms of heat exhaustion or heatstroke is to get them to immediately stop what they are doing, Leonard says. Remove the soccer player from the field, tell the hiker to sit down, get the tennis player out of the sun. If symptoms point to heatstroke (especially anything neurological like confusion), they need to be taken to an emergency facility right away, he says.

For heat exhaustion, Leonard says to take steps immediately to adequately cool the person who’s overheated: Mist them with a spray bottle, for example, or pour water over their head. The most important places to cool are the head and face, the arm pits, and the groin, he says. “These are all areas of high blood flow and, when cooled, the blood near the surface is transported back toward the core of the body and sent to the vital organs.”

10. Most important: Listen to your body

Often a workout in the heat at the beginning of summer is more difficult than in the middle because your body hasn’t adapted to the heat yet, says Garber. It will adapt to higher temperatures over time, she says. But listen to what it’s telling you because the physiological message — to ease up, rest, or cool down — might be different at different times of the day or season. “Some avid exercisers say, ‘we’re tough’ and go through any discomfort,'” she says. “But there are [some serious warning signs] they shouldn’t ignore.”

If you do get a heat-related illness, it can last for a few days, she adds. So take care of yourself, and don’t rush back out into the sun.

Suzette Lohmeyer is a frequent contributor to NPR. She is based in Arlington, Va., where she can usually be found writing, with a dog sitting next to her.