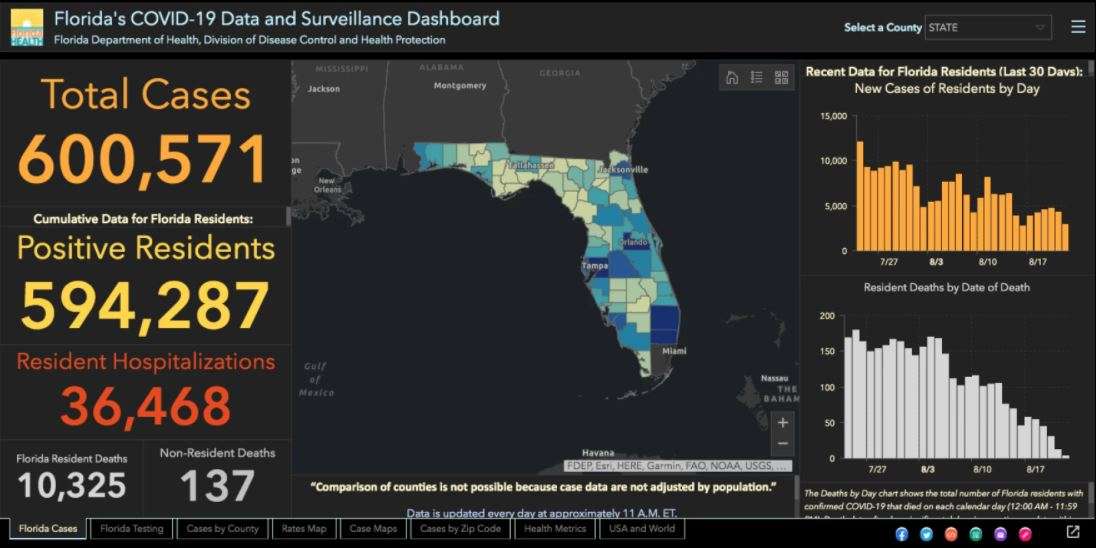 Screenshot Via Florida Department Of Health

Since the start of the COVID-19 pandemic, WLRN has been reporting on array of numbers to try to make sense of how Florida is faring in its battle against the virus, from the rise and fall of available hospital beds to the dreaded positivity rate.

The numbers are supposed to give us a road map about how and when Florida can get back to a more normal life.

But because there’s so much we’re still learning, we decided to dig into the numbers, ask epidemiologists about which ones we should pay attention to and better understand how those numbers are being calculated.

Since we don’t have a national standard for a dashboard where health departments post numbers like testing rates and deaths, each state has developed its own system. In Florida, there are also other websites where numbers are available. For example, up until June, Miami-Dade’s dashboard reported hospitalizations, but the state web site did not.

For South Floridians tracking COVID, all the numbers and curves can feel as maddening as tracking a hurricane.

“Hurricanes are definitely easier to predict than a COVID is, I can tell you that,” said Zoran Bursac, a biostatistician and professor at Florida International University.

But what they do share is the need to look at trends or curves, and not day-to-day changes. With hurricanes, experts say to watch for trends in storm tracks, and not changes form forecast forecast because inevitably incremental changes can happen that don’t make a big difference in the long run. So think of the curves in COVID as those tracks.

In June, parts of Florida moved into the second phase of reopening businesses and other activities. Because of its high numbers, South Florida remained in phase one, although restrictions on gyms, outdoor dining and short-term rentals were lifted.

That soft-reopening coincided with a rebound in numbers. That was a curve worth heeding.

About a week after the Fourth of July weekend, numbers peaked, reaching the highest one-day spike in the country. So Miami-Dade retreated, tightening up restrictions again. South Florida counties began citing businesses that failed to heed orders and started enforcing mandatory mask orders.

As of Friday, 685 businesses in Broward County remained shut down for not following orders. Miami-Dade has issued several hundred citations.

That led to another change in tracking as numbers again began falling.

But what’s complicated tracking the disease, Bursac said, is how some numbers get reported.

Take hospitalizations. Earlier in the pandemic, Florida’s Surgeon General Scott Rivkees asked hospitals to stop counting patients whose primary reason for being hospitalized was not COVID. If they were admitted to treat the disease they should be counted, he said, but not if they happened to test positive after they were admitted for something else, like a heart attack.

That led to county numbers sometimes being higher than the state, said Jason Salemi, an epidemiology professor at the University of South Florida’s College of Public Health.

“I’m not saying [it’s] right or wrong here,” he said. “I’m just saying we need better standardization. We need transparency on what the definitions are for all of these things.”

The timing of when numbers get reported also matters, Salemi said.

“Those cases that are just reported today, they could have actually tested positive yesterday, the day before, the day before that, even a week ago, and even more egregious were deaths,” he said. “A death that is reported today in Florida? That person may have died two weeks ago.”

That delay could distort reporting on how the disease is spreading, he said.

It’s also more accurate to include a positive test or, especially, a death, when it occurred, Bursac said.

“When we look at the deaths, we don’t report the last two weeks because it takes 14 days to sort this out and to assign them, to assign a death to a specific date,” Bursac said. “That’s when we start looking at deaths, when everything has been retrospectively verified. Even when you go on the Florida dashboard, you can see, oh yesterday it was only five deaths, but look in a week and all of those numbers are going to change.”

“Overall, in terms of having essential indicators, the detailed information that’s useful for response to it, the understanding of how the response is going, that information is lacking,” said Shahpar, who compared data from the 50 states and Washington D.C..

Florida is only tracking white, Black, Hispanic and then, “other” and “unknown,” making it hard to know how different
ethnic groups and races are doing.

The state is also not tracking the turnaround time for test results or the prevalence of people wearing masks. This kind of information is essential to understanding how effective a state is at controlling the disease, Shahpar said.

For epidemiologists these numbers are critical to understanding which policies are effective and where risk might be shifting.

One number that has dominated headlines, and for good reason, is the positivity rate. The rate is the percentage of positive results of all the tests done on any given day – or over the course of a week.

As the disease spreads, that rate goes up. If it’s too high, that could mean our testing isn’t covering enough of the general population, just high-risk people in nursing homes or prisons.

Back in July, Miami-Dade County reported 26 out of 100 tests were positive. That means the positivity rate was roughly 26 percent. Health experts say the number needs to be much lower and, in some places like Miami-Dade County, consistently below 10 percent before business restrictions are loosened.

Hospitalizations are another number to watch. Deaths are obviously important too, but Salemi said that’s often like looking in the rearview mirror into infections that happened four to five weeks ago.

Like hurricanes, epidemiologists can also model and forecast COVID-19.

“It’s not on a website. We kind of do it internally,” Bursac said. “We give people sort of the cone of uncertainty, just like the hurricanes.”

Like hurricanes, conditions can dictate how the disease behaves. With a hurricane, how the planet behaves — whether it produces wind shear or sends a cloud of Saharan dust — can disrupt a hurricane. The same applies to how a community behaves and the spread of COVID.

If we limit our social interaction and wash our hands, the disease can spread less. That’s one reason epidemiologists like to track numbers and produce what seems like a dizzying number of charts: to communicate how wearing masks, closing bars or other measures influence the disease.

But even with an armada of data, Salemi said a disease as new and confounding as COVID-19 is never going to be easy to battle or manage.

“We always joke that when somebody asks a scientific question,” he said, “99 percent of the time our answer is: it depends.”