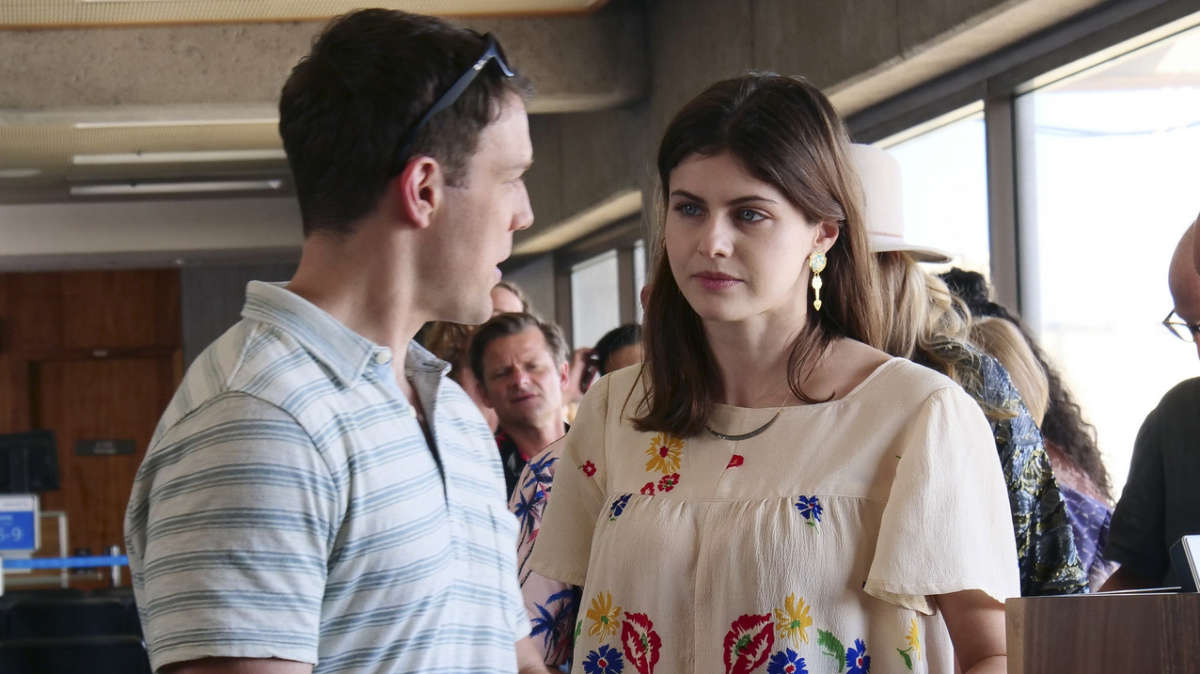 Spoiler alert: This piece discusses in detail the finale of The White Lotus.

The initially obvious targets of derision in Mike White’s The White Lotus, which wrapped up Sunday night on HBO, were the most actively, aggressively nasty people: Shane (Jake Lacy), who couldn’t stop griping about a luxury vacation even as his new wife made it clear he was ruining the trip for her; Olivia (Sydney Sweeney), who mistreated her brother and acted like the world’s most ungrateful and spoiled daughter; and perhaps the Mossbacher parents (Connie Britton and Steve Zahn), who were unleashing their children on the world with such blithe inattention to how wealth was warping them.

But in the end, the series saved its sharpest satirical cuts for three characters who seemed, early on, to be the most sympathetic in the group: Rachel (Alexandra Daddario), Shane’s wife; Tanya (Jennifer Coolidge), the struggling single woman grieving her mother; and Paula (Brittany O’Grady), Olivia’s friend, who found herself brought along on her rich friend’s family trip and never once seemed comfortable.

As Rachel grew more abjectly horrified by how Shane treated the staff, the obvious question arose: How could she have married him and not known this about him? She surely spent enough time with him and his family to have seen this entitlement, this self-regard, this emptiness of the soul that would lead him to get into a battle of wills with Armond (Murray Bartlett) over the difference between a luxurious room and a wildly luxurious room. How could she not have known?

That’s the right question if you treat Rachel’s story over these six episodes as the tale of her slowly realizing what she’d gotten herself into — of her slow progress toward telling Shane that she didn’t want to be married to him. Not being an atrocious and insensitive rich person still seemed to be her goal. The more she saw, the less she liked it, and the more it seemed like she was on track to leave him.

But maybe that was never Rachel’s story. Because without someone else to validate her feelings — with Belinda having opted out of the thankless task of kindly counseling rich white women for the time being — Rachel chose the path of least resistance. She chose her own comfort.

There have certainly been those who have found Rachel’s story unpersuasive or unreasonably abrupt, in that she seemed to be progressing toward leaving him, and then she swerved. Unexpected? Maybe. But to believe awareness leads inexorably to action is, at best, very optimistic. If everyone who came to recognize injustices in which they are complicit decided to step away from the advantages that result from that complicity, those injustices would collapse far more often than they do.

So, in fact, Rachel was not learning for the first time that Shane was a jerk. That was not the story. She was slowly coming to terms with the fact that she had chosen this, and that she wasn’t willing to un-choose it. She was not meeting a new and unexpected version of her husband; she was meeting an old but long-denied version of herself, and the fantasy she had held about who she was — a plucky writer who wanted to be independent and would always remain a regular person at heart — was collapsing.

Tanya arrived as the guest in most immediate need of attention — literally, given that she showed up begging for a massage. She was toting her mother’s ashes, locked in grief that came uncorked during her dinner cruise with Shane and Rachel. She attached herself to Belinda (Natasha Rothwell) like a malevolent barnacle that thinks it’s the partner of the ship to which it clings. She even went so far as to offer — to dangle? — the prospect of supporting Belinda’s business dreams, and at the time, she seemed to fully mean it. She did, after all, have the money.

And then, in the end, Tanya’s own version of self-realization, which included her charming burgeoning relationship with Greg (Jon Gries), led her to abandon her commitments to Belinda. What’s worse: She cloaked that abandonment in the language of self-care and self-improvement — she didn’t want another “transactional relationship,” she said, ignoring the fact that her relationship with Belinda, who was paid to care for her, had always been transactional. The alternative to a transactional relationship, Tanya’s behavior suggests, is to get your half of the transaction and then walk away — that way, it’s not an exchange or anything vulgar like that. Tanya drew the conclusion that the thing that would serve her personal emotional journey the best was to discard a person she probably would deny to the end she considered dispensable.

Jennifer Coolidge’s sympathetic turn as Tanya here and Rothwell’s portrayal of Belinda’s skepticism that gives way to just the tiniest ray of hope make this development all the more devastating. Tanya really is a damaged person, and it really is lovely to see her coming to trust Greg and trust herself and be a little happier. But the idea that her happiness comes at the expense of the Black woman to whom she owes much of it, and that she is utterly unaware of what she’s doing, is a brutal indictment of her character, as is the blithe manner in which she delivers this news and the certainty she displays that Belinda will understand she’s doing the right thing. In fact, she seems to think Belinda will want this for her, so invested does she believe Belinda is in her personal wellness.

Hiring someone whose profession is in the realm of personal care or domestic work and then transforming that bond into a personal one when (and only when) it suits you is a pattern that has haunted relationships between rich white women and women of color for decades and centuries. Exploitation doesn’t always look like open cruelty; it can look like an employer refusing to respect boundaries, telling herself the relationship is one of affection and then using that affection as a cudgel or an excuse. Tanya is sweet and damaged and also awful, and that makes her much more painful to watch than someone like Olivia.

Paula is the only guest of color in the main cast. She’s also the only one who expresses any reservations about the appropriation of Native Hawaiian culture for the benefit of tourists, and the only one who develops a relationship with a member of the staff, Kai (Kekoa Kekumano) that seems — at first — not to be exploitive and self-interested. Paula and Kai are just a couple of hot kids fooling around during a vacation, and the initial feint about that relationship is that we will root for it because Olivia is trying to sabotage it.

And then Paula hears Kai’s back story and encourages him to break into the Mossbachers’ room and steal Nicole’s jewelry. She treats it as a kind of reparations, where the Mossbachers are rich white people of precisely the kind who have stolen so much from Hawaiians like Kai, and what’s the harm, really? Nicole will recover easily from the loss; Kai’s life might be changed for the better.

But the whole thing goes horribly awry, of course, and Kai gets caught. And when Paula first realizes that it’s about to go bad, because Nicole and Mark are about to go back to their room unexpectedly, she doesn’t even seem to try to intercede, to warn him, to prevent what’s about to happen. She just freezes and lets it unfold. And when the opportunity arises later to speak up and admit that she set the whole thing up, she doesn’t. She lets the kid twist.

This takes nothing away from the accuracy of some of Paula’s skewerings of Olivia, especially that as much as Olivia likes to fashion herself as rebelling against her rich family, she’s just like them in every meaningful way. But even as Paula reads Aimé Césaire’s Discourse on Colonialism, she’s folding herself into the lives of the Mossbachers, rather than doing anything to fix the harm she’s done.

There’s plenty of other business going on in this series, particularly Armond’s complicated and agonizing journey from buttoned-up manager in recovery to spiraling, bingeing vengeance monster using Shane’s suitcase as a toilet. But while some of the initial “look at those rich jerks” energy seems to be spent primarily on those guests who spread their arms widest to embrace being rich jerks, Mike White saves his most searing and unforgettable condemnations for the same characters in whom he portrays the most humanity. The road to villainy begins, often, not with hectoring and not with insults, but with the quieter act of choosing your own comfort over what you know to be right enough times in a row.