How the U.S. got into this baby formula mess 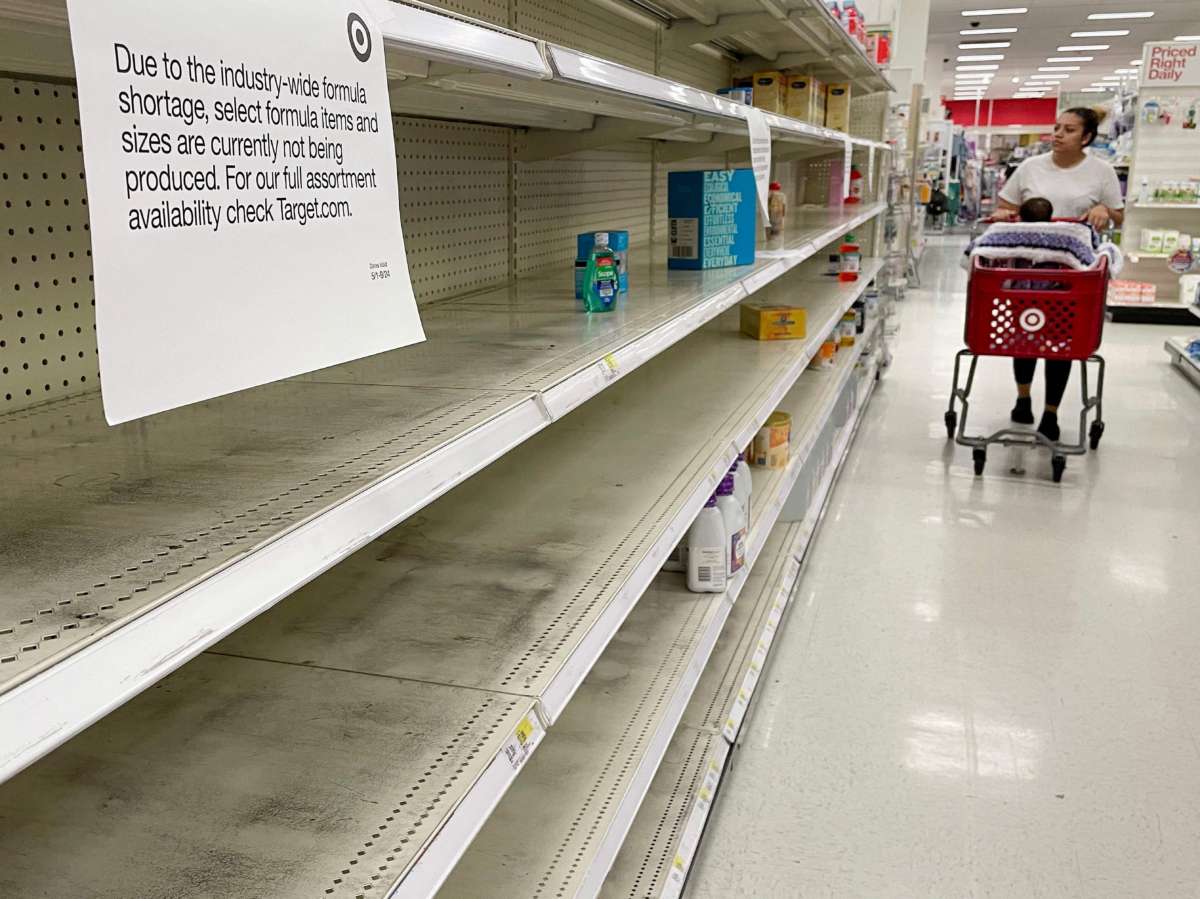 A woman shops for baby formula in Annapolis, Md., on May 16. Only a handful of companies supply baby formula in the country, a factor that has contributed to the current shortages being experienced in parts of the country.
Image credit: Jim Watson

Like a baby’s temper tantrum, the meltdown in the infant formula market has been building for some time.

The Food and Drug Administration announced emergency measures this week to get more baby formula on the market, and soothe the nerves of anxious parents who’ve been facing shortages.

President Biden invoked the Defense Production Act Wednesday to ensure that formula manufacturers are first in line for any ingredients they need. Biden also directed the Defense Department to use its contracts with commercial airlines to speed the delivery of formula from overseas.

Formula has been hard to find in some parts of the country since suspected contamination led to a recall and the shuttering of a big manufacturing plant in Michigan.

That plant reportedly supplied as much as one-fifth of all the infant formula in the country.

But the problem is bigger than that.

The episode highlights how highly concentrated the formula industry is — thanks in part to government policies — and the risks that can result.

Here’s what to know about how the U.S. got into its infant formula mess.

The infant formula industry is a multi-billion dollar business dominated by a handful of firms. In the U.S., just four companies control about 90% of the market, including Abbott Nutrition — the firm behind the shuttered Michigan plant.

These companies operate a relatively small number of formula factories in order to maximize efficiency and keep their production costs low.

“They’re concentrating production into a few, very large plants but that creates a lot of risk,” says Claire Kelloway of the Open Markets Institute, an anti-monopoly think tank. “A huge part of the crisis we’re seeing now is from the closure of one plant.”

This week the FDA struck a deal allowing Abbott to re-open its Michigan plant with new safety precautions.

The plant not only produces a large share of the country’s regular baby formula, but is a critical supplier of specialized formula for infants with allergies and other health conditions that require a particular diet.

Other parts of the food chain have similar vulnerabilities. When the giant meatpacking company JBS was hit by a ransomware attack last year, 20% of the nation’s beef and pork slaughtering capacity was temporarily idled.

“The question of whether we need more diversity in terms of the overall supply is one that, I think, will be much discussed and needs to be considered in light of the levers that we have to make that happen,” Califf told reporters Monday.

The Abbott manufacturing facility in Sturgis, Michigan, is shown on May 13. A shutdown in the factory contributed to the shortage of baby formula in the country.
Jeff Kowalsky/AFP via Getty Images

State contracts lead to reliance on a single supplier

The federal government not only regulates formula makers. It’s also their biggest customer. About half of all formula sold in the U.S. is paid for by the Department of Agriculture, through its Special Supplemental Nutrition Program for Women, Infants and Children (WIC).

Each state signs an exclusive contract with one of the formula manufacturers to supply subsidized product for low-income families. The government gets a big price break. In exchange, the formula maker gets a large, captive market.

The USDA’s own research found that whichever company gets the WIC contract in a state enjoys a powerful market advantage there, with a monopoly over WIC sales and “spillover” effects in the non-WIC market as well.

Supermarkets tend to give preferential shelf space to the formula maker with the WIC contract. And pediatricians may be more likely to recommend that brand to their patients.

“Because the WIC program is such a large purchaser — it buys about half the formula on the market — once a company has an exclusive deal to service a state, competitors don’t have a financial incentive to compete in that state,” Kelloway says.

Abbott — the company behind the shuttered Michigan plant — has the WIC monopoly in about two-thirds of all states. The administration has asked states to relax those rules temporarily, so WIC recipients can use their benefits to buy any brand of formula.

There are also almost no imports

Typically, the U.S. buys almost no infant formula from other countries. There are steep, 17.5% tariffs on most formula that is brought in. And regulatory barriers make it almost impossible for formula makers outside the country to sell to the customers in the United States.

“It’s clear that the U.S. has basically closed off its market to imports,” says Mary Lovely, a senior fellow at the Peterson Institute for International Economics.

Regulations governing the manufacture and labeling of formula are ostensibly designed to protect the safety of U.S. infants. But they also serve to protect the domestic formula companies from overseas competition.

“There’s really no reason we should be blocking perfectly nutritional formula coming out of high-quality, sanitary plants in the European Union,” Lovely says. “There is no reason why we can’t be importing baby formula from Canadian plants, which could very easily be inspected by FDA.”

Baby formula is offered for sale at a grocery store in Chicago on Jan. 13.
Scott Olson/Scott Olson

To address the current formula shortage, the FDA has relaxed its rules to allow for imported formula — a tacit admission that foreign supplies can be sold safely, with adequate precautions.

Lovely says the formula shortage illustrates the pitfalls of believing that an entirely domestic supply chain is necessarily more secure.

“Having one or two factories in the U.S. or suppliers in the U.S. is not a way to be resilient,” she says. “In fact, it’s a recipe for being vulnerable.”

Security comes from having a variety of suppliers — at home and in friendly foreign countries. In other words, don’t put all your eggs in one basket, or all your baby formula in one bottle.

It will take time to sort out the mess

So how soon will the formula shortage end? Not overnight.

The FDA says it will take about two weeks to restart production at Abbott’s Sturgis plant and another six to eight weeks to bring that plant to full capacity. Imported formula will also need to be screened and is probably weeks away from showing up on store shelves, although use of the military’s air freight contracts might speed delivery somewhat.

In the meantime, the administration is working with domestic formula makers and retailers to ensure that existing supplies get to where they’re needed most.

While specialty formulas and particular brands may be hard to locate, overall formula sales in April were 13% higher than before the Abbott recall, according to the market research firm IRI. The increase suggests that fear of shortages may be driving some parents to buy more formula than usual.