How The U.S. Could Halve Climate Emissions By 2030 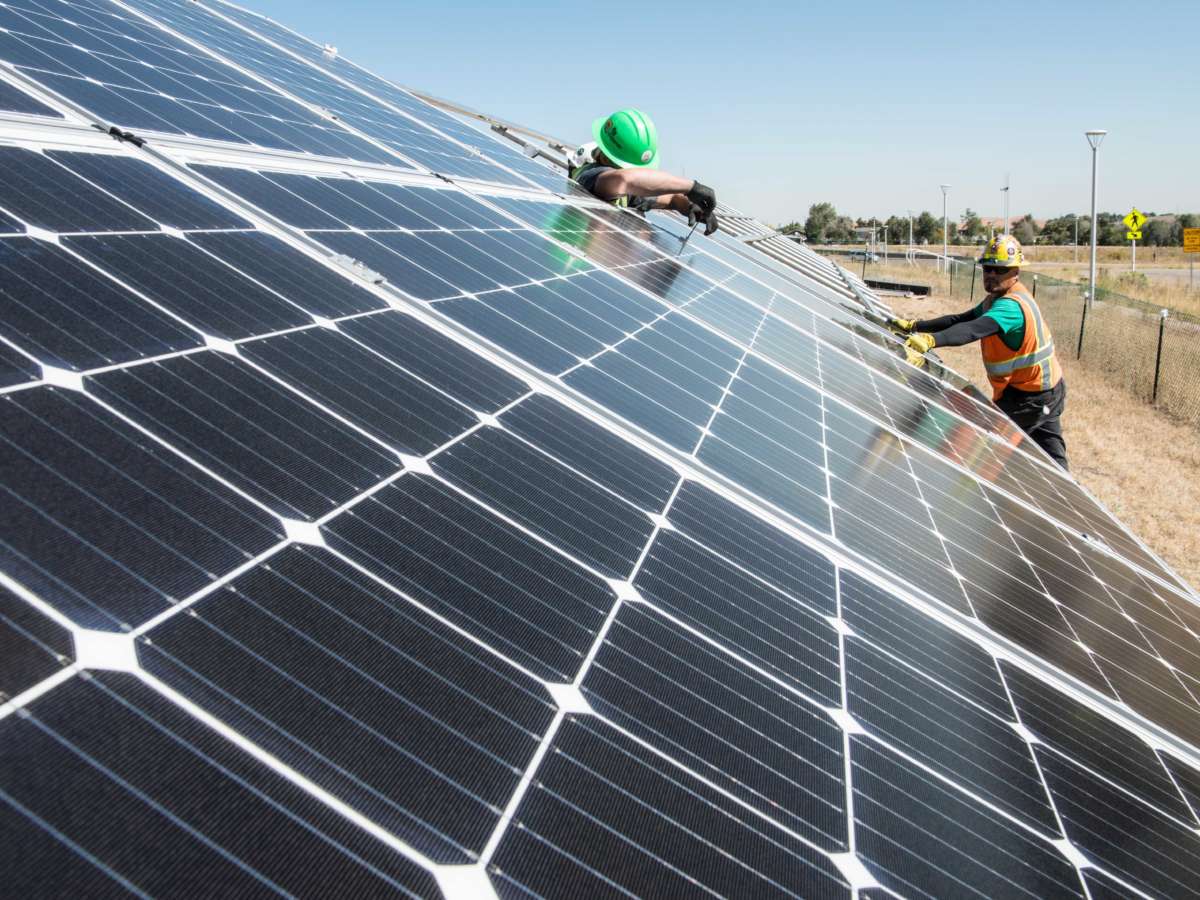 To cut carbon emissions, President Biden announced an initiative to further cut the cost of solar installations, like this one being tested at the National Renewable Energy Laboratory in Colorado.
Image credit: Dennis Schroeder

Next week, President Biden will announce a number that could shape the rest of his presidency: a new goal to cut U.S. greenhouse gas emissions.

The announcement marks the country’s renewed commitment to the Paris accord, the international climate change agreement that former President Donald Trump withdrew from. Environmental groups, scientists and major business leaders are urging the Biden administration to cut emissions 50% by 2030, as compared to 2005 levels.

That target lines up with scientific assessments of the reductions needed to avoid the worst impacts of climate change. To limit warming to 1.5 degrees Celsius, emissions need to drop to net-zero by 2050. Above that and sea levels rise to extreme heights, heat waves get more intense, and hurricanes and wildfires become even more destructive.

A 50% cut would not be the world’s most aggressive target, but it would put the U.S. among the four most ambitious countries. Going back to 1850, the U.S. has pumped more emissions into the atmosphere cumulatively than any other nation.

Still, achieving that target by 2030 won’t be simple, requiring both political buy-in and a sweeping deployment of cleaner cars and clean energy sources.

“It’s pretty ambitious,” says Danielle Arostegui, senior analyst at the Environmental Defense Fund. “This is not an easy target to achieve but we think it is something that is achievable if we really put the pedal to the metal here and put these policies in place that we need to actually get there.”

What would it take? Based on research from universities and advocacy groups, here’s what the U.S. might look like in 2030.

The fastest and largest way to cut emissions by 2030 is likely through the way we generate electricity. Across three independent assessments which ran simulations of different policies, the power sector would have to make up the majority of the overall emissions cuts.

Solar, wind and other renewables, already growing rapidly, would produce roughly half of the country’s electricity by 2030, according to an analysis by the University of Maryland and World Resources Institute. That would be significantly faster than current federal estimates, which forecast renewables being below half of the energy mix in 2050, 20 years later. If renewables continue to grow at the current rate, the country would need to turn to other carbon-free sources of energy like nuclear power, according to a Princeton University analysis.

The recent growth of solar and wind has largely been driven by their falling costs, making them cheaper options than fossil fuels in some locations. The Biden administration recently announced an initiative to drive those costs down even farther, cutting the price of solar by more than half by 2030.

“We saw a record amount [of renewables] in 2020, even despite the effects of the pandemic,” Arostegui says. “So we’re looking at an acceleration of trends that are in place, not a wholesale new process that doesn’t have any basis in what’s going on in reality.”

On the flip side, fossil fuels would shrink correspondingly, with coal power dropping to just a tiny percentage, if not disappearing completely. Because both renewable energy and natural gas are more affordable, coal power plants are already on the decline. Many have closed and existing power plants aren’t being operated as much.

“It actually is uneconomical in many cases to continue to burn coal, even regardless of the climate and health impacts of that,” says Nathan Hultman, director of the Center for Global Sustainability at the University of Maryland. “So coal is struggling already, and it’s unlikely that it will continue in any significant form beyond 2030.”

Still, to meet a goal of 50% by 2030, both of these trends would need to happen far faster than they currently are, either through new policies or spending. Politically, coal communities are fighting to keep the industry afloat. The Biden administration has already brought up potentially using a “clean electricity standard,” a rule that requires utilities to get increasing amounts of their electricity from low-carbon or carbon-free sources.

Today, transportation is the country’s largest source of emissions. While cars have been getting cleaner on average, Americans have been buying more SUVs and other large vehicles, causing oil consumption to go up.

Today, electric cars make up about 2% of new cars sales, but to achieve deep emissions cuts by 2030, new car sales would need to be between 50 to 100% electric by then, according to several analyses. That would produce significant air pollution and health benefits, according to a report from the University of California Berkeley and others, if the vehicles run largely on electricity from low-carbon sources like solar and wind.

That’s not far off from recent announcements made by major automakers. GM is planning on an all-electric future, aiming to phase out internal combustion engines by 2035. Volvo has also committed to going electric by 2030.

That doesn’t mean the roads will look dramatically different then, though. Most cars last for a decade or more, meaning that gas-powered vehicles will still be a large part of the overall mix in 2030.

Still, requiring car companies to make cleaner cars is only half the battle. To encourage consumers to buy them, researchers say that strong tax incentives will need to be in place, as well as “cash for clunkers” programs which provide incentives for trading in older vehicles.

3. Buildings, industrial plants and land all get in the game

Achieving steep emissions cuts also means every sector of the economy would need to contribute, but some could take much more time for new policies to have an effect.

The third largest source of U.S. emissions is large industrial facilities, including plants that make cement, steel, chemicals and paper. Many require manufacturing at high temperatures, a very energy intensive process. To replace that, some may need new technologies that haven’t been developed yet.

“Industry defies an easy overall solution,” Hultman says. “Each industry has its flexibilities and frankly, inflexibilities, and it’s up to them to sort through that. It also means there’s a tremendous amount of support that can be done by research and innovation.”

Energy used by homes and buildings is also a major emissions source. The federal government would need to dramatically speed up energy efficiency programs, including standards for appliances. It could also phase out the use of natural gas in heating and cooking, something the industry is already fighting in a number of states. Biden’s infrastructure package calls for retrofitting more than 2 million homes and buildings to make them more energy efficient.

Forests and farmland would also need to play a role, since they absorb greenhouse gases from the atmosphere. Conserving more land, as proposed in Biden’s 30×30 goal, would prevent emissions from being released, while planting trees or encouraging farmers to use techniques that boost carbon absorption could suck up greenhouse gases that have already been emitted.

With just nine years to implement these programs, climate experts say speed will be key. Many policies take years to develop and then, more years to affect overall emissions. As other countries evaluate their own emissions targets in preparation for climate negotiations this fall, they’ll be looking to the U.S. to see if its commitments are more than just words.