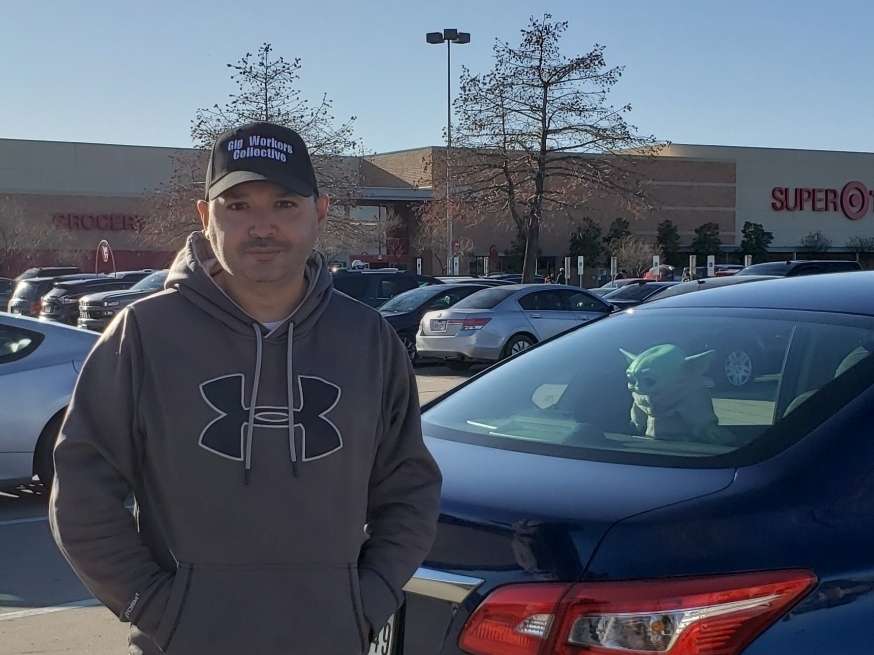 In 2020, Willy Solis became a voice for thousands of gig workers at Target-owned Shipt, leading calls for better treatment and pay during the pandemic and beyond.

Willy Solis never saw himself as an activist.

“I’m an introvert, extreme introvert,” he said. “That’s my nature.”

The coronavirus pandemic drove many people to recognize gig work as “essential” for the first time, but the crisis also revealed the stark disparities between jobs that come with security and benefits and gig work, which does not.

And Solis, the introvert, became a voice for thousands of gig workers, leading calls for better treatment and wages. He organized walkouts and protests over pay and safety concerns at Shipt, the grocery delivery app owned by Target. He also joined the Gig Workers Collective, a group pushing for better treatment of workers across apps, including Instacart and Lyft.

No one was more surprised by this newfound activism than Solis himself.

“It’s taken me to a place where I never thought that I’d be,” he said.

The 42-year-old resident of Denton, Texas, spends six to eight hours a day working for Shipt and other delivery apps. While he had some frustrations with gig work before the pandemic, he enjoyed the flexibility it promised and the opportunity to control his own time.

But then in January, Shipt started changing the way it calculates pay for many of the hundreds of thousands of workers who pluck items off the shelves of stores like Target and Kroger and deliver them to customers’ homes.

Solis had been commiserating with fellow workers — whom Shipt calls “shoppers” — for months. But that pay change pushed him over the edge.

“In a two-week period, I talked to over 600 shoppers,” he said. “And then next thing I know, I’m finding myself talking to national media.”

When the pandemic hit just a few weeks later, it made everything worse. Shipt shoppers struggled to get protective equipment, like masks and gloves.

Solis was on his phone from morning to night, connecting with other workers in Facebook groups and messaging apps. Soon he was in touch with thousands of people.

The first walkout came in April. Shoppers refused to accept orders. They did it again in May, July and October. They also protested outside Target’s headquarters in Minneapolis and Shipt’s main office in Birmingham, Ala.

Organizing is now a huge part of Solis’ life. While sitting in his car waiting for orders to show up on the Shipt app, he responds to tweets and Facebook messages, checking in with fellow shoppers.

This summer, he was laid up with COVID-19. Still, he kept going — talking to reporters and keeping tabs on the organizing work from his sickbed.

“I know that that sounds crazy,” he said.

His efforts have forced change. After Solis and fellow activists raised repeated complaints, Shipt acknowledged in August that some workers were not getting the tips customers paid.

The company said it was “a system glitch that caused a very small number of tips from being transferred to shoppers.” It paid the missing tips and added an extra $5 for every affected shopper.

Shipt said workers’ feedback is important to the company. “We encourage shoppers to speak freely to Shipt about their shopper experience through multiple feedback channels we offer. We also have teams dedicated to hearing, logging and sharing shopper feedback we receive among the company,” spokeswoman Danielle Schumann told NPR in a statement.

The company says the new pay model did not change shoppers’ average pay. A study by MIT researchers reached the same conclusion, but found pay varies widely, with 41% of workers in its survey earning less under Shipt’s new system.

Solis still thinks the pay is too low. And, he says, the work is hard. He waits a long time to get orders, since so many people affected by the pandemic have signed up for gig work to make ends meet.

“The reality is that I could go out and find another job and bring myself up into a better financial situation,” he said. But he feels he is able to speak out, while others cannot take that risk. “I decided to go ahead and stick it out as long as I possibly can.”

Solis doesn’t want to relive his battle with the virus or spread it to others. So he uses a lot of disinfecting wipes and hand sanitizer — more than the 6 ounces a month that Shipt supplies. (The company provides free reusable face masks, wipes, and hand sanitizer to workers who say they want it.) And he works just enough hours to cover his bills. Christmas with his four kids was a low-key affair this year.

Solis says the trade-offs are worth it. He found his voice.

“It’s beyond one person and one family,” he said. “My story is everybody’s story. And there’s thousands of people that I speak for.”