How The Islamic State Smuggles Oil To Fund Its Campaign 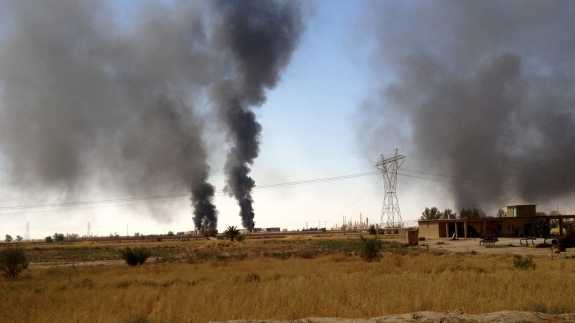 Smoke rises from the Baiji oil refinery during the clashes between the Islamic State and Iraqi government forces in Baiji, northern Iraq, on July 30. The militants tried to take the refinery this summer, but government forces have held on.
Image credit: STR

In less than three years, the Islamic State has had a remarkable rise from start-up militants to a cash-rich and capable extremist organization. The swift expansion is fueled, in part, by a massive oil smuggling operation in eastern Syria that has now expanded to Iraq, according to regional analysts and oil industry specialists.

The Islamic State, also known as ISIS, earns millions of dollars from these ongoing smuggling efforts.

“It’s a tiny amount for a state, but it’s quite a lot for a terrorist group,” says Rafik Mark Latta, with the Energy Intelligence Group. Latta dismisses exact figures.

“It’s much too complex,” he notes, but he agrees with the widely quoted oil industry estimate that the Islamic State is smuggling one to three million barrels a day.

“I suspect, at times, it ‘s been more,” he says of the sophisticated and extensive operation.

Oil As A Priority

When Islamic State fighters stormed across the Syrian border into Iraq and seized Mosul, a city of 2 million, back in June, they arrived in Toyota pickup trucks and dusty sedans. A fleet of oil tankers was also part of the convoy. The group was coming for the oil.

They made a bold grab for some of Iraq’s most valuable assets, lucrative refineries and oil fields. A day after Mosul was taken, the militants moved south, surrounding the Baiji oil refinery, Iraq’s largest.

They also seized at least four oil fields, including Ajeel, one of the most productive, near the Iraqi city of Tikrit. When they got to the Al Kaz field, in Anbar province, “They took all the cash, they took all the vehicles, they gave strict instruction that nothing should be touched, ” says Latta.

“In June and early July, ” he recounts, “ISIS was stealing oil out of pipelines, out of storage tanks, loading it onto trucks and selling it to drivers for very cheap.”

The cut-rate price of 25 dollars a barrel was an incentive for traders to buy.

“The drivers were then selling to middle men,” explains Van Heuvelen, “then middle men would find a way to launder the oil, so to speak, and then sell it on.”

The profits were huge. His calculations based on interviews with drivers and reports of trucks crossing local borders.

“Our estimate — it was about a million dollars a day going across,” he said.

The Islamic State was driven out of the Ajeel field at the end of August by the Iraqi military, but that hasn’t dented smuggling from other fields or dimmed their goal to capture even more lucrative fields. They have set their sites on the oil-rich province of Kirkuk, bordering Mosul.

Now, Kurdish fighters known as the peshmerga tightly defend the province and the oil fields, but the Islamic State has gained control of one district in the southwest of the capital city.

“When we see oil tankers coming from areas controlled by ISIS we confiscated those,” says Najmiddin Karim, the governor of Kirkuk. “We have confiscated many oil tankers.”

But there are many open desert roads, and the Islamic State has created alternative routes by bribing drivers and officials for forged papers, insuring a steady flow of cash.

“In war time, people do anything to make money; that’s why they are called warlords,” says the governor, acknowledging the persistence of smuggling routes.

Islamic State militants learned the ruthless smuggling trade in U.S. prisons in Iraq. They had good teachers, say regional analysts. Young radicals were jailed with experienced al-Qaida leaders before the prisons were shut in 2010.

“We’ve definitely seen this film before in post-2003 Iraq,” says Ali Kedery, a former adviser to U.S. ambassadors and U.S. military commanders in Baghdad until 2010.

“That’s how they were able to build up a war chest of hundreds of millions of dollars,” he explains.

Rafik Mark Latta agrees. “In those days, Baiji, which is Iraq’s largest refinery, was known as al-Qaida’s refinery.”

For years, al-Qaida in Iraq, skimmed millions from the facility through the extortion of local employees until the U.S. military stepped in and shut the operation down.

“Syrian local businessmen, they’ve got these ‘tea-kettle’ refineries, all very small operations” says Latta. “Most are under 100 barrels a day. And ISIS takes a cut” for sales on the domestic market.

The networks for exporting stolen crude are even more extensive, he says, moving through Turkey and Iran and reaching international markets as far away as Afghanistan and Armenia, earning millions for the militants.

In recent weeks, say Latta, Kurdish and Turkish officials have stepped up efforts to shut down the networks.

“If you cut their money in half, they would still pose a threat, but it’s a start,” he says. Other experts who have been tracking the illicit oil trade say it will take a massive effort to curb the cash flow.

“You would need to have people on the ground to give information, ” says Luay Juwad Al Khatteeb, a visiting fellow at the Brookings Doha Center, who has researched the Islamic State’s finances. “You would need hundreds of people in hostile territory.”

Shutting down the illicit oil trade “requires having an entire security structure that is resistant to corruption,” says Van Heuvelen.