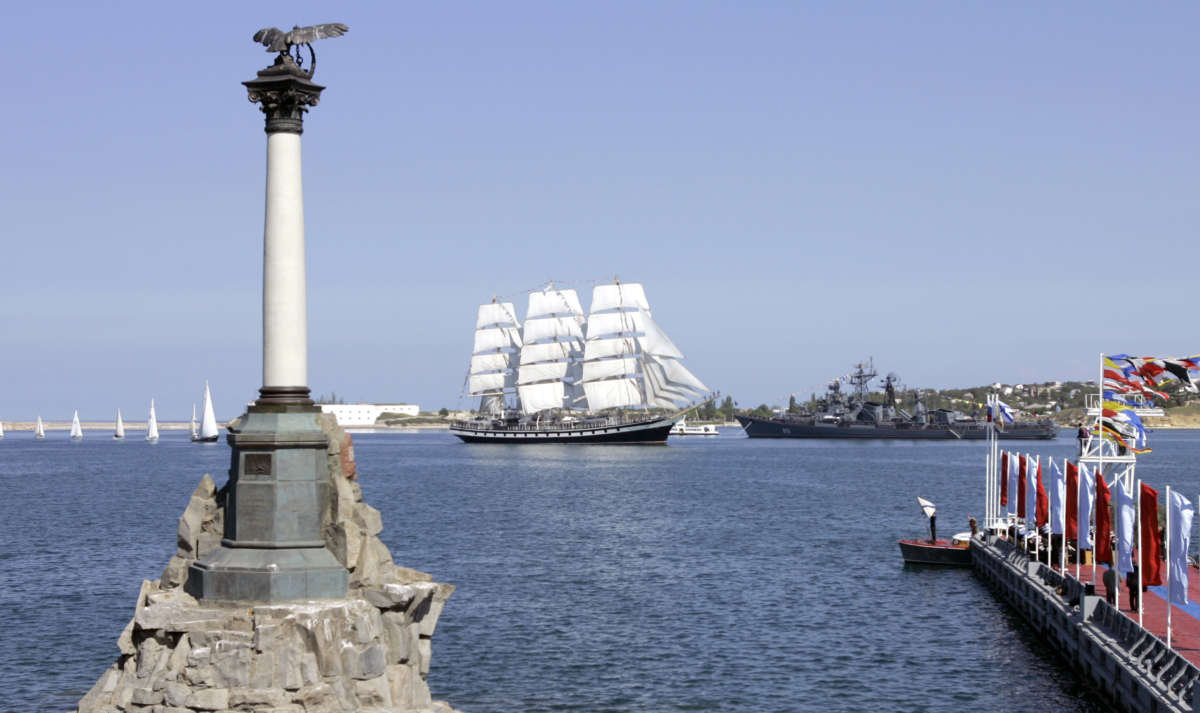 The Russian Black Sea naval headquarters at Sevastopol, Crimea, in 2008. In the background on the right is a Russian destroyer. The Russian tall ship Padalla (with white sails) is in the center. In the foreground is the Monument to Scuttled Ships, marking Russia's intentional destruction of its own naval fleet in the Crimean War in 1854 as British and French warships approached.

KYIV, Ukraine — Here’s a widely held view of Russia’s war: Russia had a more powerful army and expected a quick victory. It didn’t think Western powers would intervene. Yet a poorly planned military campaign led to a fight much tougher than expected.

Even if you’re not familiar with the Crimean War, you know some of the monumental figures who emerged from it, like Florence Nightingale and Leo Tolstoy.

But this isn’t just history. That long-ago conflict is still relevant today. For starters, when Russia fought the Ottoman Empire in 1853, the focal point was Crimea — the very same territory Russian President Vladimir Putin seized in 2014 when he first invaded Ukraine.

During the first Crimean War, The Economist magazine — the same one that’s still going strong — wrote a scathing piece in 1854 on Russia and its leader, Czar Nicholas I.

“That vast state is in great measure composed of spoils which she has torn from surrounding nations,” The Economist wrote. “Her frontier provinces are filled with injured, discontented hostile populations … many of whom wait, with patience and desire, the blessed day of emancipation and revenge.”

“There are very distinct parallels. And I think Putin has probably overstretched himself in the same way that Nicholas I did,” says Orlando Figes, a British historian and the author of The Crimean War: A History.

“Nicholas, who wanted to counteract the influence of liberal democracy in Europe, came up with the slogan, ‘Orthodoxy, autocracy, nationalism,'” Figes says. “That might just as well stand for Putin’s ideology. This is a war backed by the Orthodox Church. He is an autocrat. He sees himself as a bulwark against liberal principles coming from the West.”

Professor Vladislav Zubok, a Russian historian at the London School of Economics, has a similar take.

He notes that Russia had a huge army in the 1850s but planned poorly for the Crimean War.

“Very quickly after the outbreak of the war, it turned out that Russia was so weak that it couldn’t even properly supply the troops on its own territory,” Zubok says.

Much like today, where Russia has suffered recurring logistics failures since invading Ukraine in February.

Nicholas I also thought Western powers would not interfere with his war against the Ottoman Empire, which he called “the sick man of Europe.” He was stunned when Britain and France joined the fight against Russia.

“He could not imagine that the leading powers of Europe would turn against him,” Zubok says. “He definitely provoked the Crimean War by his arrogance, by his wrong assumptions about Europe and other powers. And he essentially blundered his way into this war.”

“Putin did not believe that the Europeans and the United States would together push back against what Russia was doing,” says Angela Stent, a Russia expert at Georgetown University. She’s met many times with Putin during his more than two decades in power, and is the author of Putin’s World.

“He also didn’t believe that Europe and the United States would agree on these very tough sanctions. So he was wrong on a number of counts,” she adds.

Of course, the Crimean War was also filled with folly. A disastrous British military operation was immortalized by Britain’s Alfred, Lord Tennyson in his epic poem, the Charge of the Light Brigade, which includes these enduring lines:

“Forward the Light Brigade
Was there a man dismayed
Not tho’ the soldier knew
Some one had blunder’d:
Theirs not to make reply,
Theirs not to reason why,
Theirs but to do and die:
Into the valley of Death
Rode the six hundred.”

Tennyson wasn’t alone in turning tragedy into art. A young Russian artillery officer, Leo Tolstoy, drew on his experience when he later wrote War and Peace.

And Florence Nightingale became one of the most famous women in the world as she ushered in a new era of military medicine by using more sanitary methods to treat wounded troops.

Decades later, in 1890, she made a recording about her time in Crimea and the place where she set up her field hospital, Balaklava.

“When I am no longer a memory — just a name — I hope my voice may perpetuate the great work of my life,” she said. “God bless my dear old comrades of Balaklava and bring them safe to shore.”

The war did, however, further damage the reputation of Nicholas I. He died in 1855, while the fighting still raged. His 30-year rule left Russia isolated, impoverished and badly in need of reforms.

Russia lost the Crimean War a year later and was forced to accept humiliating terms.

Russia pledged not to place warships in the Black Sea — where it desperately wanted to project naval power.

Today, Russia is projecting naval power in the Black Sea. In an escalating crisis, some 20 Russian warships are blockading the southern coast of Ukraine, keeping the country from exporting its abundant grain to the world.

“I think this is again a historical continuity,” says Georgetown’s Stent. “Russia trying to dominate the Black Sea. The goals haven’t changed that much.”

Russia has long portrayed itself as a leading military power. Putin recently compared himself to Peter the Great, the czar who expanded Russian territory through conquests in the early 1700s.

So its current invasion of Ukraine comes as no surprise to Volodymyr Viatrovych, a prominent Ukrainian historian.

“This is, of course, an imperial war,” says Viatrovych, who’s also in Ukraine’s parliament and is a member of the armed forces who helped defend Kyiv in the early days of this war.

“Russia today acts as an empire. It is intending to expand. They’re trying to take land that they perceived to have belonged to them in the past,” he says.

While Russia has had many military triumphs, he says its overall record is decidedly mixed.

“If we look throughout the course of history, not only the 20th century, but also the 19th century, Russia lost more than it won,” Viatrovych says.

Russia was part of the winning side in World War II. But it was defeated by Japan in a 1904-’05 war, had an abysmal showing in World War I that helped pave the way for the 1917 Russian Revolution, and the Soviet Union lost a war to rebels in Afghanistan in the 1980s.

“Russia, has really built this myth of being a global superpower,” says Viatrovych. “But what we’ve seen since the invasion of Ukraine is that they are not a superpower.”