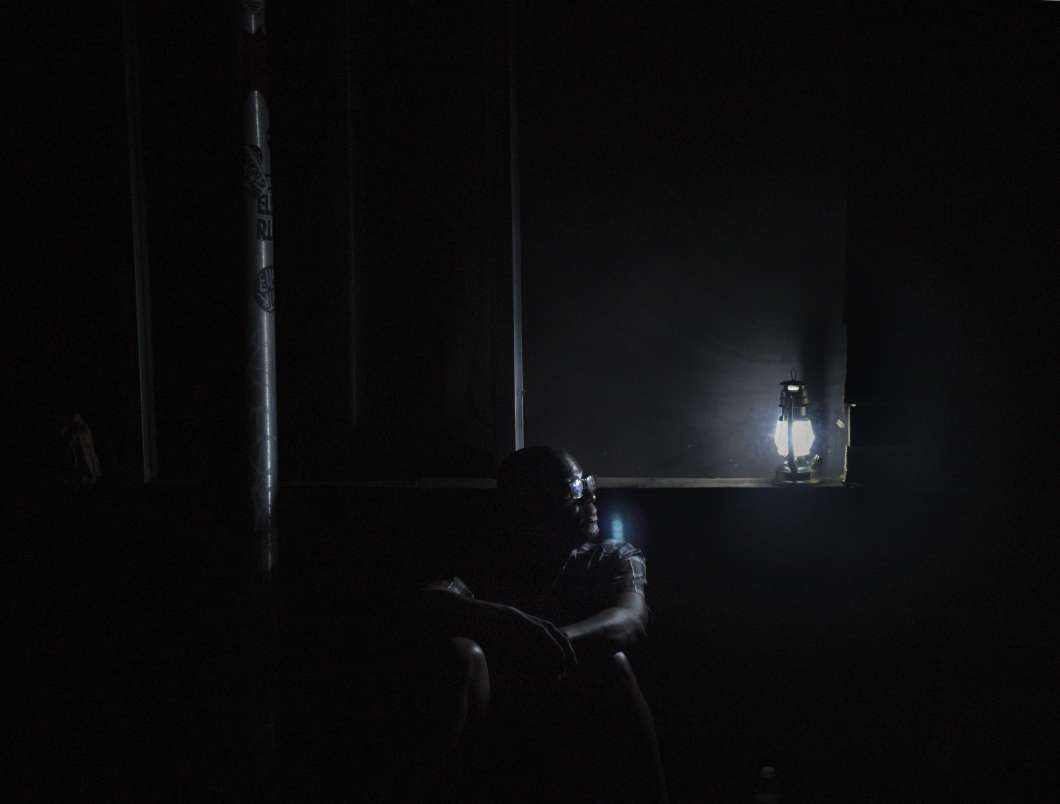 Jaime Degraff sits outside on Sept. 23, 2017, as he waits for the Puerto Rican electrical grid to be fixed after Hurricane Maria. The island is still struggling with power outages.
Image credit: Carol Guzy

Before Hurricane Maria hit last September, Puerto Rico was battered by the forces of another storm — a financial storm.

But it didn’t fall into financial ruin all on its own: Wall Street kept pushing the Puerto Rican government’s loans even as the island teetered on default, with a zeal that bank insiders are now describing with words like “unethical” and “immoral.”

NPR and the PBS series Frontline spent seven months looking into Puerto Rico’s difficult recovery from Hurricane Maria. And beneath the storm damage we found the damage from those economic forces, triggered by a government desperate for cash and banks and investment houses on Wall Street that made millions off that desperation. Some of those banks found ways to make even more money that risked the financial future of not only the island but thousands of residents as well.

‘Puerto Rico Is In Dire Need’

Riding up the rickety elevator to the top of the Palo Seco power plant just outside San Juan, this convergence of natural and economic forces was apparent. As engineers fought to turn the plant back on and restore electricity to the island, weeds and rusted steel revealed decades of government neglect.

“There are elements that have not been replaced in years,” said José Sánchez, then the head of power grid restoration for the U.S. Army Corps of Engineers. “Puerto Rico is in dire need, not only of power plants but a reconstruction of the grid itself.”

And it wasn’t just the power grid. Water pumping stations, bridges, levees, roads — all had been starved for investment for years. Even people’s homes weren’t as strong as they should have been. Before the storm, the island could afford only five building code inspectors, for a population of 3.5 million people.

Banks involved in Puerto Rican finances declined NPR and Frontline‘s requests for an interview but said in statements that they have done nothing but try to help Puerto Rico when it was in need of money.

One thing that is clear: The island needed more help than it got.

‘Down The Rabbit Hole’

It wasn’t always this dire. For decades, Puerto Rico’s economy was booming. A special tax break on the island lured in pharmaceutical companies and manufacturers.

Then in 1996 Congress started phasing out the tax break, and a decade later the island spun into recession. Rather than cut spending to make up for declining tax revenue, the Puerto Rican government went the other way. It borrowed money.

“When you start borrowing long term just to pay next month’s payroll you know you are going down the rabbit hole,” said Sergio Marxuach, the policy director for the nonprofit Center for a New Economy in Puerto Rico.

“It was crazy,” he said. “The government was borrowing at an incredible clip.”

Like most governments, Puerto Rico preferred to borrow money through the sale of bonds. The island would take an investor’s money and essentially give him an IOU — a promise to pay the money back with interest. Investors liked the deal because they could earn that interest tax-free.

Banks liked the deal too. They stepped in to structure the bonds and find buyers — often pension funds, retirement accounts, maybe the bank’s own investment clients — all in exchange for fees.

“Fund managers, they will not admit this now, but when Puerto Rico was selling debt like pancakes, they loved Puerto Rico debt,” Marxuach said. “You would put … these Puerto Rico bonds into your portfolio and since they had slightly higher interest rates and no taxes attached to them, you immediately looked like a genius. You just bumped up the entire return.”

“So that’s your bonus,” he added. “That’s your new Mercedes, your new yacht.”

NPR and Frontline talked with more than a dozen bankers, advisers and brokers involved in Puerto Rican bonds who described a fast pace of moneymaking and competition, and politicians desperate for an influx of cash.

“All the major banks in New York would come to Puerto Rico on a regular basis to pitch deals,” said Capacete, a former branch manager for UBS, the largest broker-dealer in Puerto Rico. “They make commissions. They make fees. This is kind of like a moneymaking machine. As long as there are transactions coming and going, they’re making a ton of money.”

But Capacete said that in 2011, he and other bankers started realizing what many bond investors hadn’t yet figured out: Puerto Rico was in trouble. There was too much debt. And instead of moving away from bonds — and keeping the shaky investments out of their clients’ portfolios — Capacete says the opposite happened. He said banks pushed brokers to sell more bonds.

Many of the bonds were specifically designed to be sold to Puerto Ricans, packaged into special funds that were less transparent than anything regulators would allow on the mainland. Regulations against things such as banks recommending their own bond deals to investors didn’t apply on the island.

According to court records filed in the aftermath of the island’s economic calamity, brokers sold thousands of Puerto Ricans these special funds. This left hundreds of millions of dollars of the island’s wealth concentrated in increasingly tenuous investments — at the worst possible time.

And then, Capacete says, he learned it was even worse than it looked. He says a client warned him that some brokers on the island were pushing Puerto Rican investors — who already had so much of their retirement or personal savings in these special funds — to borrow still more money, and invest that in the funds too. He says he sent emails complaining to the bank.

“It’s unethical, it’s against the banks’ regulations and it puts the client in a really, really tough risk situation,” Capacete said.

UBS declined NPR and Frontline‘s request for an interview but said the loan terms were fully disclosed to clients and that Capacete is a disgruntled former employee who has sued the bank. The bank said the loan program as a whole did not violate financial regulations, but that it had fired the one broker it discovered had been using the program incorrectly. And it pointed to a separate case where federal regulators determined the bank had not misled its customers.

Eventually federal regulators investigated and found the bank should have had a system in place to prevent the practice. They fined UBS $34 million for the loan scheme and other problems. They also fined UBS and four other banks for putting clients at risk in the special Puerto Rican funds.

The party came to an end for investors in 2013. Bond prices tanked. All those thousands of investors tied up in the same Puerto Rican funds were in serious trouble, and those who had taken out additional loans suddenly had to cover them.

Within months, hundreds of millions of dollars in Puerto Rican wealth was wiped out. Rating agencies downgraded Puerto Rican bonds to junk.

Looking back, Rosselló said at this point in the financial crisis it seemed like “the government of Puerto Rico was run as a big Ponzi scheme.”

“What you had was essentially a black box of a government running, that had no clarity as to what was being borrowed and or what was being spent,” Rosselló said in an interview with NPR and Frontline.

‘The Banks Get Out’

Once again, at a time when you might think Puerto Rico and the banks would turn away from the bond business, they did the opposite. In 2014, Puerto Rico and a group of banks teamed up for another bond deal. At $3.5 billion, it was the largest municipal junk bond offering in U.S. history.

But some bankers and brokers, several of whom worked on the deal, described the 2014 bond as more than just a bond deal. They said it was also an exit strategy for the banks.

Government records show banks had been lending Puerto Rico hundreds of millions of dollars and making other investments there in the years before the financial troubles began. And according to bond documents from the 2014 deal, nearly a quarter of the entire bond went to those banks.

Almost $900 million raised from the bond issue didn’t go to Puerto Ricans — or even to keep the government afloat — but instead went to pay back loans, pay fees or eliminate risk of banks directly involved in putting the deal together.

Neither Barclays nor any of the other banks involved in the deal would agree to an interview. In statements, banks said that they fully disclosed their financial stake in the deal and did not influence how Puerto Rico used the money. Morgan Stanley noted that it also extended Puerto Rico $250 million in credit after the bond.

Axel Rivera, who worked at Morgan Stanley as a bond broker and financial adviser when the deal was done, said as the island got closer to default, banks were getting nervous.

“They had much more [debt] than they wanted and they needed to unwind that,” Rivera said, adding that the bond deal allowed them to do that.

“The banks get out, and everybody else gets stuck with the bill,” Rivera said. “Most of the general public didn’t understand what was going on. The darkness of this bond deal made a lot of people in Wall Street happy, but it was immoral in many ways.”

The bond funds crashed. Many Puerto Rican investors lost savings, retirement funds or their pensions. The government started closing hospitals. There was little money to shore up bridges or strengthen the electrical grid.

And then, on Sept. 20, 2017, a Category 4 hurricane came barreling into Puerto Rico. The island was left to face the wrath of the storm in a place starved of investment for years by a government that had to borrow to pay its bills.