How local and national leaders are tested by major natural disasters 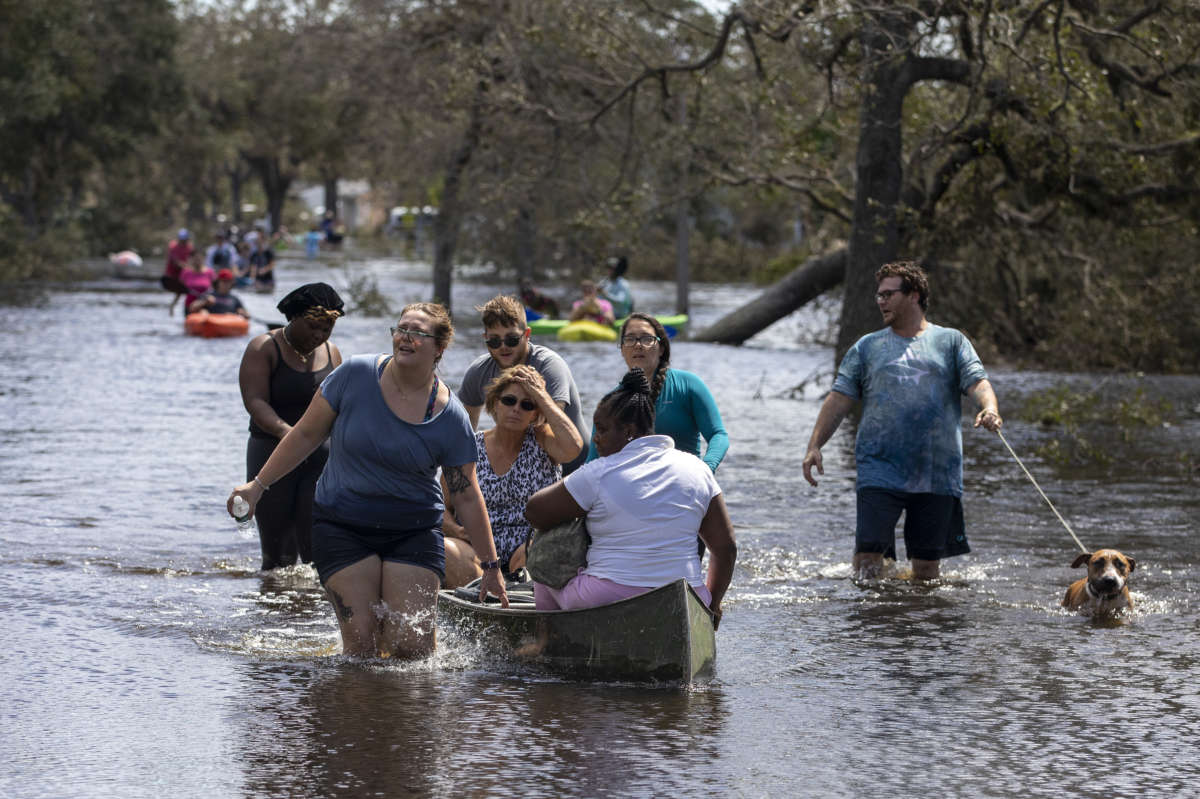 The remnants of Hurricane Ian will continue to be felt this weekend and in coming days up and down the East Coast. These storms, which happen every year and have been made worse by climate change, are testing politicians and local leaders.

They will continue to be major trials, showing whether government can work at its most basic functions – keeping people safe and helping them recover when they aren’t.

“In some ways, these events cut through a lot of the silliness of politics and get to the seriousness of politics – making sure that a state’s resources are at the ready to deal with an event that threatens the lives and livelihoods of its citizens,” said Andrew Reeves, a professor at Washington University in St. Louis and director of the Weidenbaum Center on the Economy, Government, and Public Policy, where he studies, among other things, storm politics.

“This is politics, so I think it’s the right time to talk about these things.”

Storms and natural disasters have always presented challenges for presidents and local leaders. If handled well, they can cement their images as leaders of their communities, looking competent and trusted to help constituents get what they need. If mishandled, they can be major albatrosses that mar their legacies.

This storm comes just weeks before Florida Gov. Ron DeSantis, someone believed to have presidential aspirations, stands for reelection. So the stakes for the people of Florida – and DeSantis – couldn’t be higher.

It can be impossible to judge how a leader is handling a storm in its immediate aftermath. That judgment really comes with the answers to key questions facing any recovery: How quick and efficient are rescue efforts? When does power get restored? Are people able to get food and clean water? When are roads repaired and bridges reconnected? When are people able to get back into their homes? When can communities rebuild? And where does the money come from?

“These are often sort of pop quizzes in leadership,” Reeves said. “This particular pop quiz happens to be close to a midterm election. Voters tend to have short-term memories. So, you know, even something that happens six months or a year out doesn’t have a tremendous amount of staying power. But we’re in October here. And so this event is going to be different.”

Billion-dollar disasters are on the rise

The number of disasters costing $1 billion or more have increased substantially since 1980, according to the National Oceanic and Atmospheric Administration, which tracks these events.

“Climate science is increasingly able to show that many of the extreme weather events that we are experiencing have become more likely and more intense due to human-induced climate change,” Petteri Taalas, head of the World Meteorological Organization, said this week. “We have seen this repeatedly this year, with tragic effect. It is more important than ever that we scale up action on early warning systems to build resilience to current and future climate risks in vulnerable communities.”

DeSantis has tried to walk a line between the MAGA base and the reality of the politics of disaster relief in Florida. He said during his gubernatorial campaign that he doesn’t want to be labeled a “global warming person,” for example. He also appointed a “resilience” officer and took some other steps that environmentalists liked.

But it’s one thing to acknowledge climate change is real and try to save for disaster relief; it’s another to take steps to curb the long-term effects of climate change, something he hasn’t done.

The approach is complicated by what people say they want. Although there have been an increasing number of wildfires and floods that have wreaked havoc on communities across the country, and despite the evidence that climate change will only increase these events, people say they would rather rebuild than relocate.

Two-thirds of respondents to an NPR/PBS NewsHour/Marist poll last year said they’d rather rebuild in the area they currently live rather than move. Politicians are going to respond to that kind of sentiment. That’s going to mean new building guidelines, perhaps increased insurance regulations – and money, lots of it.

That money for disaster relief is going to come from the local and federal governments, and that means elected officials have to work together, even ones who don’t like each other very much.

After the storm hit, DeSantis touted his conservative fiscal policies.

“We have the largest budget surplus we’ve ever had, and we’ve worked very hard, of course, to keep the economy open and make this a state people wanted to be in,” he said. “And so we were seeing historic reserves, even as we’ve continued to break records with the revenue coming in — with no income tax and low taxes.”

But he also acknowledged he would need the federal government’s help. That’s meant something of a détente between DeSantis and President Biden, who couldn’t have more different policy outlooks.

“It’s my sense that the administration wants to help,” DeSantis said on Fox News this week.

It’s quite the turnabout from when DeSantis was in Congress and voted against funding for Superstorm Sandy victims in 2013.

“This ‘put it on the credit card mentality’ is part of the reason we find ourselves nearly $17 trillion in debt,” DeSantis said then.

Aside from local politics at play, this was the era of the Tea Party, which helped Republicans win the House in 2010. Their message, in great measure, was about the federal debt. Often during the Obama administration, many House Republicans voted against things that had traditionally had bipartisan support, like raising the debt ceiling and disaster relief funding.

In 2018, DeSantis voted in favor of emergency funding in the wake of Hurricanes Harvey, Irma and Maria, which affected Puerto Rico, Texas, and, notably, Florida.

Biden this week said he had spoken with DeSantis multiple times. When asked if he and DeSantis would meet when Biden heads to Florida, the president said, “I’ll meet with anybody who’s around. The answer is: Yes, if he wants to meet.”

DeSantis has routinely made criticism of Biden a staple of his reelection campaign, fueling speculation about a potential presidential run. But, for now, in light of the devastation in his state, DeSantis has tabled that kind of talk.

“When people are fighting for their lives,” DeSantis said on Fox, “when their whole livelihood is at stake, when they’ve lost everything, if you can’t put politics aside for that, then you’re just not going to be able to. So, I’ll work with anybody who wants to help the people of Southwest Florida and throughout our state.”

It happened at least twice during former President Obama’s administration, for example.

Former Florida Gov. Charlie Crist is now a Democrat running against DeSantis. But in 2009, he was a Republican governor of the state. As the state was reeling from the economic collapse and seeking economic relief funds, Crist introduced Obama, and they briefly hugged on stage.

That hug was used in ads against him, and played a big part in derailing Crist’s Republican political career.

Then-Republican New Jersey Gov. Chris Christie was a sharp Obama critic, but then worked with Obama to secure Sandy funding. Christie faced lots of conservative criticism for his embrace of Obama and arguably hurt his presidential ambitions.

In April 2020, a different New Jersey governor, Democrat Phil Murphy, who had been critical of Trump, went to the White House to lobby President Trump for coronavirus relief help. In June, after the two had dinner together, Trump announced he had authorized funding for a long-stalled New Jersey infrastructure project. It was a “reward” for Murphy’s attendance at the dinner, according to the book, This Will Not Pass, by New York Times reporters Jonathan Martin and Alexander Burns.

“This is politics where people have to work together,” Reeves said. “And part of that working together involves the federal response coordinated with the state response. It involves governors calling up presidents and asking them to declare disaster declarations so that federal dollars can flow into those states. And, you know, that creates some awkward photo ops.”

Certainly, all eyes will be on Biden and DeSantis when the political foes – and potentially political rivals – do finally meet, even as both acknowledge the need for comity now.