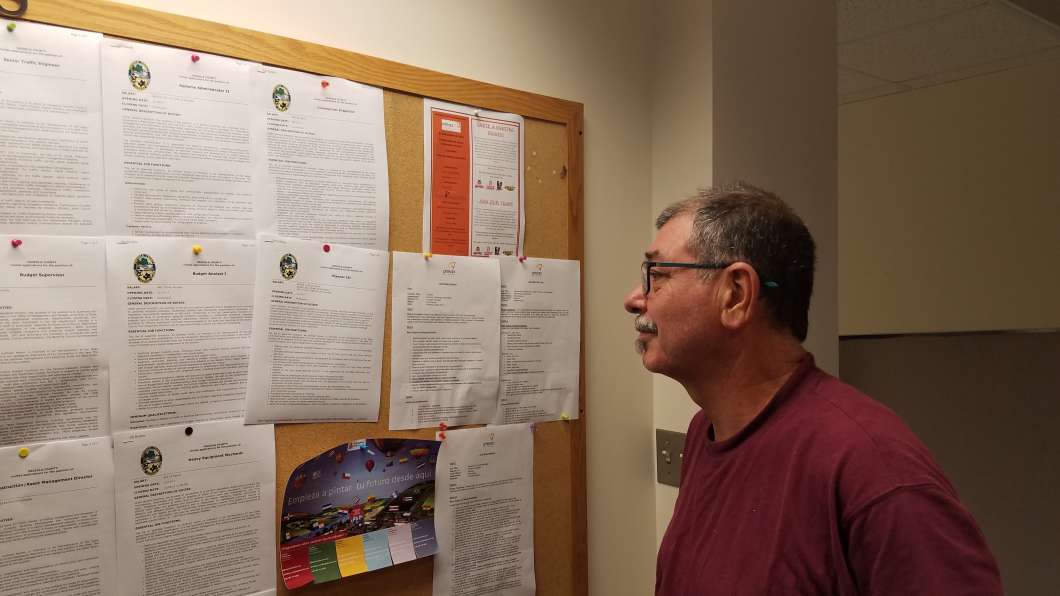 More than two thousand families fleeing Puerto Rico after Hurricane Maria have visited Osceola County’s welcome center since it opened in early October. For our ongoing series, The Maria Migration, I stopped by to see what kind of help is being offered.

On a sunny weekday morning, a small crowd gathered outside the locked doors of the welcome center in Kissimmee. Some sat patiently on the floor, waiting for the center to open. Outdoor signs with large black lettering read: Hurricane Maria Reception Center.  A woman called out numbers as people filled out forms on clipboards.

A young woman, Jumse Davila was near the front of the line. She wore a backpack and a grey sweatshirt that said ‘USA’ in big letters on the front.

Davila knew Florida had these welcome centers before she boarded a plane. She said she heard about it through social media promotions.

She’s staying in a hotel paid for by the Federal Emergency Management Agency. She has some 45 days to find a job and an apartment.

Davila’s looking for work, anything will do. With tears starting to well up she said, she lost everything and doesn’t plan to return to the island. She’s planning a new life here.

While Davila is alone, many evacuees are staying with family in central Florida. Kissimmee resident Jesus Cintron waited in line to get help for his wife’s parents. Cintron worried about his in-laws living with unreliable electricity that would go in and out. He said the couple in their mid-to-late sixties was hesitant to leave.

“It took a little bit of convincing, but today at least they’re over here and they can have a better time until the island gets better, because eventually they want to go back, said Cintron. His in-laws plan to return to their house on the island. For now, the neighbors will check up on it.

David Barnett is the human services manager in Osceola County. He said services at the center include assistance with housing, education and employment. Agencies also help families sign up for food stamps, Medicare and Medicaid.

“This is the first time that we’ve had this type of disaster that’s had, the scope of this is bigger than anything we’ve done before,” said Barnett.

A Florida Health Department team was on site to help parents secure food benefits and immunizations for their children.

Bizmar Gonzalez checked out a big board on the wall with countless job postings. Maria blew the roof off his house. He said FEMA gave him $5,000. That wasn’t enough to cover his total home repair costs.

“So, I had to abandon my house and come to live with my daughter for a short while, but I can’t stay there too long,” said Gonzalez.

Gonzalez is a retired teacher from the island. He’s hearing bilingual teachers are in high demand. Luckily for him, a big career assistance bus was parked outside. Inside, people got help with resumes and preparing for job interviews. New arrivals are anxious to get things in order. Some say they don’t want to be a burden to their families.

*Editor’s Note: The story was revised to reflect the welcome center is run by Osceola County, not the city of Kissimmee.