How hospitals, first responders reacted to the Pulse shooting 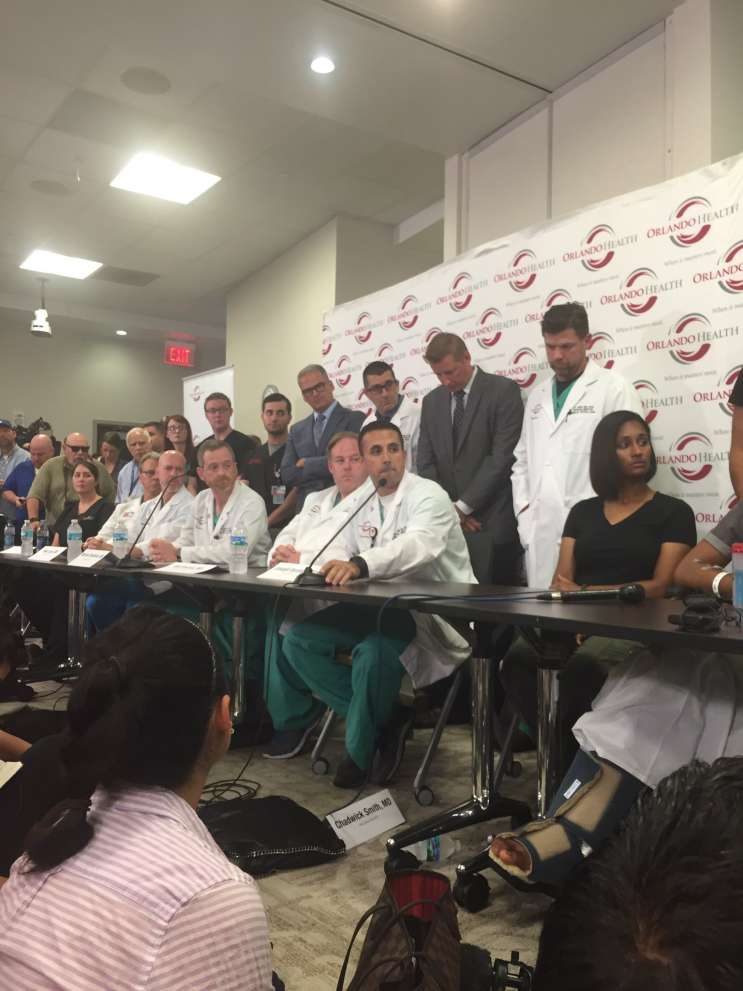 Orlando Health held a press conference Tuesday, June 13. They said many victims were able to get to Orlando Health quickly, which surgeons say saved lives.

It’s a Level 1 Trauma Center, and medical staff there were pushed to the limit as they dealt with the onslaught of patients coming from the Pulse nightclub shooting that happened just three blocks away. Medical staff and patients recounted the events of early Sunday morning.

Angel Colon, 26, was with three friends that Saturday night into Sunday morning. They all survived. But when the shooting started, Colon was shot three times in the leg and wasn’t able to move. He was trampled by the crowd. And then he says, shooter began executing people who were wounded inside the club.

“I look over and he shoots the girl next to me, and I’m just there laying down and I’m thinking I’m next, I’m dead,” Colon said. “So I don’t know how, but by the glory of God he shoots toward my head and he hits my hand. And then he shoots me again and it hits the side of my hip.”

Colon managed to stay calm for hours until police shot and killed the gunman. An officer found Angel Colon alive on the floor.

“He grabs my hand, and he says this is the only way I can take you out, ” Colon said. “I’m like please carry me, I’m in pain. So he starts to drag me out across the street to the Wendy’s. I’m grateful for him, but the floor is just covered in glass.”

Colon said he wouldn’t be alive without Orlando Regional Medical Center. Even though the hospital was three blocks away, it wasn’t easy getting Colon and the others there. Because the scene was unsafe, it was impossible to get EMS into the club, so the injured were taken to the hospital in the back of police pickup trucks and civilian cars – any way to get them there.

Dr. Christopher Hunter is associate director of Orange County’s EMS system. He said first responders did minimal intervention to stop the bleeding and get them to the hospital.

“For that first burst of patients, because it was so close and so many were coming out, it was just grab and go,” Hunter said.

The medical staff at ORMC had no warning for what was coming. But they got existing patients out of the trauma ICU into other areas of the hospital, discharged as many patients as they could. And they diverted other emergency patients to other hospitals.

And the hospital opened up six operating rooms, with multiple surgeons working on one patient at a time. Doctors described walking out of one OR and into another to keep operating.

In total, 28 surgeries the first night – and 16 since. Dr. Joseph Ibrahim said they’ve had to bring patients back in for repeat surgeries.

“We’re seeing some things now with this high caliber rifle causing injury, soft tissue injury, that’s causing some destruction and some of the tissues having issues so now we have to go back and debrided,” Ibrahim said.

“I was on call again last night and I was walking out of the hospital and walking out, I saw team members walking into work crying,” Smith said. “I just couldn’t express, it’s hard to describe how you feel.”

Doctors said these were the kinds of injuries scene in a war. Because of the type of rifle and how close the shooter was to his victims. They said If Pulse hadn’t been three blocks away, many of these patients would not have made it to the hospital alive.