How Dangerous Is Zika For Babies, Really? 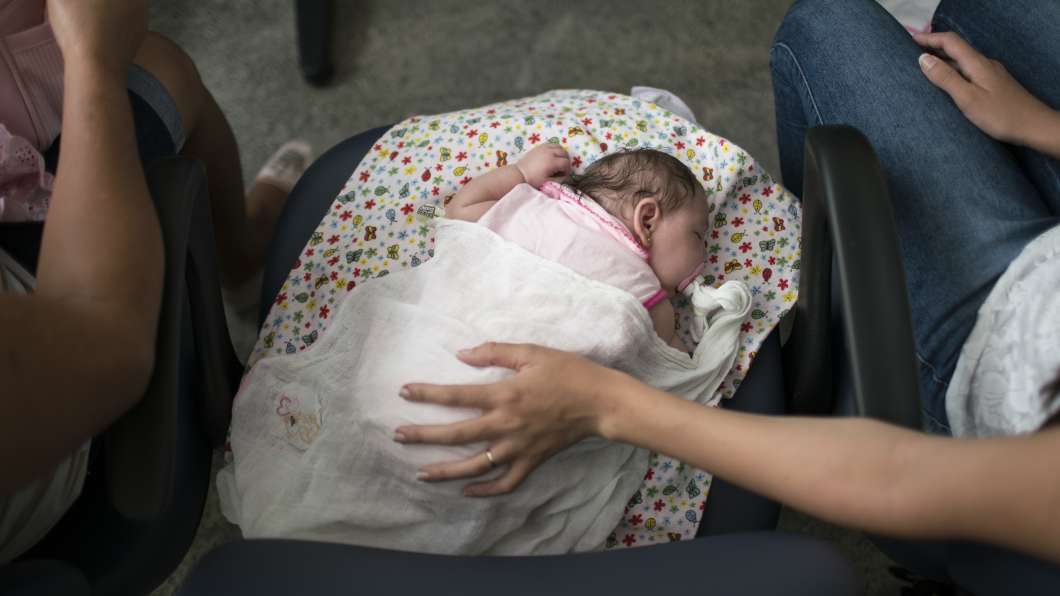 No one is sure why the northeastern part of Brazil has been hit so hard with microcephaly cases.
Image credit: Felipe Dana

This year we’ve learned an amazing amount about Zika — how it damages developing brains, how it spreads through sexual contact and where in the world (and the U.S.) it’s hiding out.

But there has been one big question lingering: What risk does Zika pose to pregnant women and their fetuses? How scared should they be of it? More specifically, what’s the chance a woman will have a healthy baby if she catches Zika during her pregnancy?

Finally, scientists are starting to figure it out. And at first, it seems like good news. But when you dig a bit deeper into the data, the repercussions of Zika could be far more widespread than previously predicted.

Let’s start with the good news. Two studies published earlier this month estimated the risk that a baby will be born with microcephaly — a condition that is characterized by a very small head and severe brain damage — when a woman is infected during the first or second trimester of her pregnancy.

Both studies — one published in The New England Journal of Medicine and the other in JAMA — came up with about the same risk: 3 to 4 percent.

That’s about 40 times higher than the risk of microcephaly in the U.S. when Zika isn’t around. But it’s a lower risk than health officials predicted earlier this year, says Dr. Karin Nielsen, a pediatrician at the University of California, Los Angeles, who contributed to one of the two studies.

“Three percent is a small amount of microcephaly,” she says. “It’s certainly not as astronomical as what had been projected.”

And that small risk is likely why there haven’t been as many microcephaly cases reported this year in Latin America and the Caribbean as health officials had projected earlier this year.

So far, the only region reporting a large number of microcephaly cases is the northeastern tip of Brazil, Nielsen says. Brazil has reported about 2,200 cases in total. And nearly 1,700 have occurred in the northeast region, the Ministry of Health reported.

But other countries have reported many fewer. Colombia is second highest with about 70 cases. The U.S. is third with 37. Then the Dominican Republic with 22 and Guatemala with 15. One way to think about this data is that Brazil has about four times the number of people as Colombia but about 30 times the number of Zika cases.

Right now, no one is sure why the northeastern part of Brazil has been hit so hard with microcephaly cases.

“What I personally believed happened in this region is that the attack rate — meaning how many people got infected with Zika — was extremely high,” Nielsen says.

Another hypothesis is that some environmental factor, such as pesticide exposure or being infected at the same time with another virus, could have increased the risk of microcephaly in northeastern Brazil.

And indeed, infection with another mosquito-borne virus, called chikungunya, can cause miscarriages and low birth weights. But so far, there’s been no evidence that this virus increases the risk of birth defects, Nielsen says.

OK, so that’s the good news — the risk of microcephaly isn’t as high as health officials first feared. And case numbers across Latin America and the Caribbean have been low, so far. So what about the bad news?

Several studies have found that the effects of Zika on a developing fetus go way beyond microcephaly. Now, it looks like these Zika-related problems may be vastly more common than previously predicted.

Nielsen and her colleagues recently followed 117 women in Rio de Janeiro with confirmed Zika infections during their pregnancies. All these women gave birth to live babies. Four percent of the babies had microcephaly. But nearly 38 percent of them had problems other than microcephaly, either at birth or three months later.

“We had babies that had abnormal MRI exams of their brains, babies with eye abnormalities, babies who failed hearing tests and appeared to have significant hearing loss,” Nielsen says. “And we had babies with fetal growth restriction” — a condition in which the fetus doesn’t grow as it should in the uterus. In some cases, the mom was infected late in pregnancy, during the third trimester, and her baby still had problems. In contrast, with microcephaly, there appears to be little risk when the Zika infection occurs late in pregnancy.

When Nielsen and her team saw how many babies had problems — more than 40 percent — they didn’t believe the data at first. “We said, ‘Wow that’s really high. That’s absurd,’ ” she says. “But then we looked at the data over and over again and we said, ‘No it’s correct.’ ”

The study, published in The New England Journal of Medicine, has a major limitation: The control group had a very high rate of problems in their newborns as well. “Our control group was not entirely a control group,” Nielsen says.

Instead, they used a group of 57 women who had rashes during pregnancy and tested negative for Zika. In that group, three women (or 5 percent) had babies with abnormalities. In one case, the mother tested positive for chikungunya.

So the study needs to be repeated with a better control group and in other parts of the world. But if the findings stand, Zika’s impact on a generation of babies could be far more sweeping than previously thought.

“We need to follow these babies over time to see how they develop,” Nielsen says. “Will they achieve their milestones? Will they be able to walk? Talk? Will they have problems in school? We just don’t have enough information yet.”