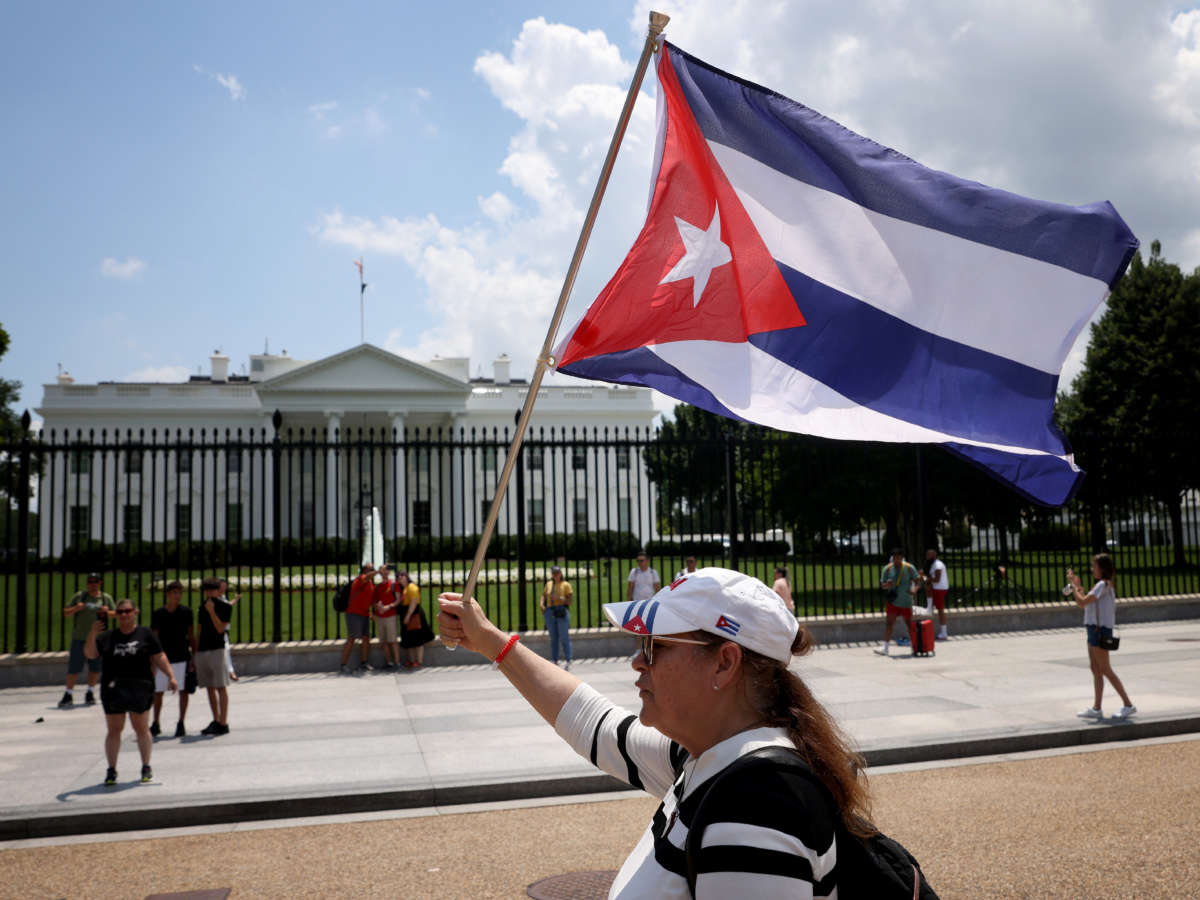 The widespread protests across Cuba this past weekend revealed significant political challenges President Biden faces as he seeks to support the demonstrations without hurting their cause — or his own political interest.

Biden says the United States stands with the thousands of Cubans who have taken to the streets to protest food shortages and high prices amid the pandemic.

“The Cuban people are demanding their freedom from an authoritarian regime,” Biden said at the start of an unrelated White House meeting on Monday. “I don’t think we’ve seen anything like this protest in a long, long time — if ever.”

But in Florida, where there’s the country’s largest Cuban American population — a crucial voting bloc in the nation’s largest swing state — many want more than words of support. Some want the U.S. to lead an international intervention against the communist regime.

“The Biden administration has itself a political gift from the gods,” said Fernand Amandi, a Democratic pollster in Florida who has encouraged Biden to visit Miami and speak directly with the Cuban American community there.

If handled correctly, Amandi said Biden can make great strides in erasing a lingering perception about the Democratic Party being a bunch of socialists.

“But if he takes a more passive wait-and-see, behind-the-scenes approach,” Amandi added, “I think it’ll be both a policy and a political opportunity lost that may cement some of the negative impressions around the Democratic Party.”

In Miami, hundreds of Cuban Americans rushed to Little Havana on Sunday in solidarity and to cheer what some saw as the beginning of the end of the communist leadership. The city’s mayor, Francis Suarez, called on Biden to take action.

Things didn’t go well for Biden in Florida during the 2020 election. He lost the state to former President Donald Trump, who was helped out by significant gains in Miami-Dade County — a Democratic stronghold where most residents are Hispanic.

For years, Cuban American voters in Florida had been trending more Democratic, but in recent years the voting bloc had increased its support for Trump.

The former president and his administration were a constant presence in South Florida, but political watchers say his supporters also ran a successful misinformation campaign tying Biden to oppressive socialist regimes in Latin America.

This week, Republicans like Sen. Marco Rubio, R-Fla., did not waste time criticizing Biden for failing to describe the Cuban government as “socialist and communist.”

He called on Biden to take concrete steps to help protesters, including setting up free satellite internet access and working with allies in the region and the European Union to “to coordinate a strong rejection and condemnation of the repressive actions taken by the Communist regime against the unarmed people of Cuba.”

“We should make clear nothing [from Trump-era policies] is going to change,” Rubio said Monday on the Senate floor. “There’s not going to be any sanctions changed as a result of this — on the contrary. I hope the Biden administration will now announce they have finished their review of Cuba policy and everything that’s in place will stay in place.”

In another sign of the White House’s cautious approach to undoing Trump’s policies on Cuba, the United States last month opposed a United Nations resolution condemning the U.S. embargo on Cuba.

It was a closely watched vote because the United States abstained on the resolution during the last year of the Obama administration, when Biden was vice president.

Benjamin Gedan, who led Latin America policy in the Obama White House, says that’s because Biden has been weary of upsetting Cuban hardliners in South Florida, who are seen as having played such a crucial role in the 2020 election.

“So far, the administration has really been walking on eggshells when it comes to Cuba policy,” Gedan said.

Those same hardliners now “see blood in the water,” Gedan says, and want Biden to push even harder while the Cuban regime appears vulnerable.

But he says the administration must also be careful that its actions don’t hurt the effort.

Indeed, Cuban President Miguel Díaz-Canel is already blaming the protests on the U.S. embargo and a social media campaign against the Cuban government.

Gedan said the challenge for the president is striking the right balance between finding some productive level of political engagement, but to do so without creating additional opportunities for Biden’s opponents to criticize him.

“And unfortunately, the perceived muted response so far from the Biden White House has fueled that disinformation campaign,” Gedan said, “and leads to the caricaturing of the Biden administration as somehow not aggressively defending human rights and democracy.”