How A U.K. Imam Countered Vaccine Hesitancy And Helped Thousands Get The ‘Jab’ 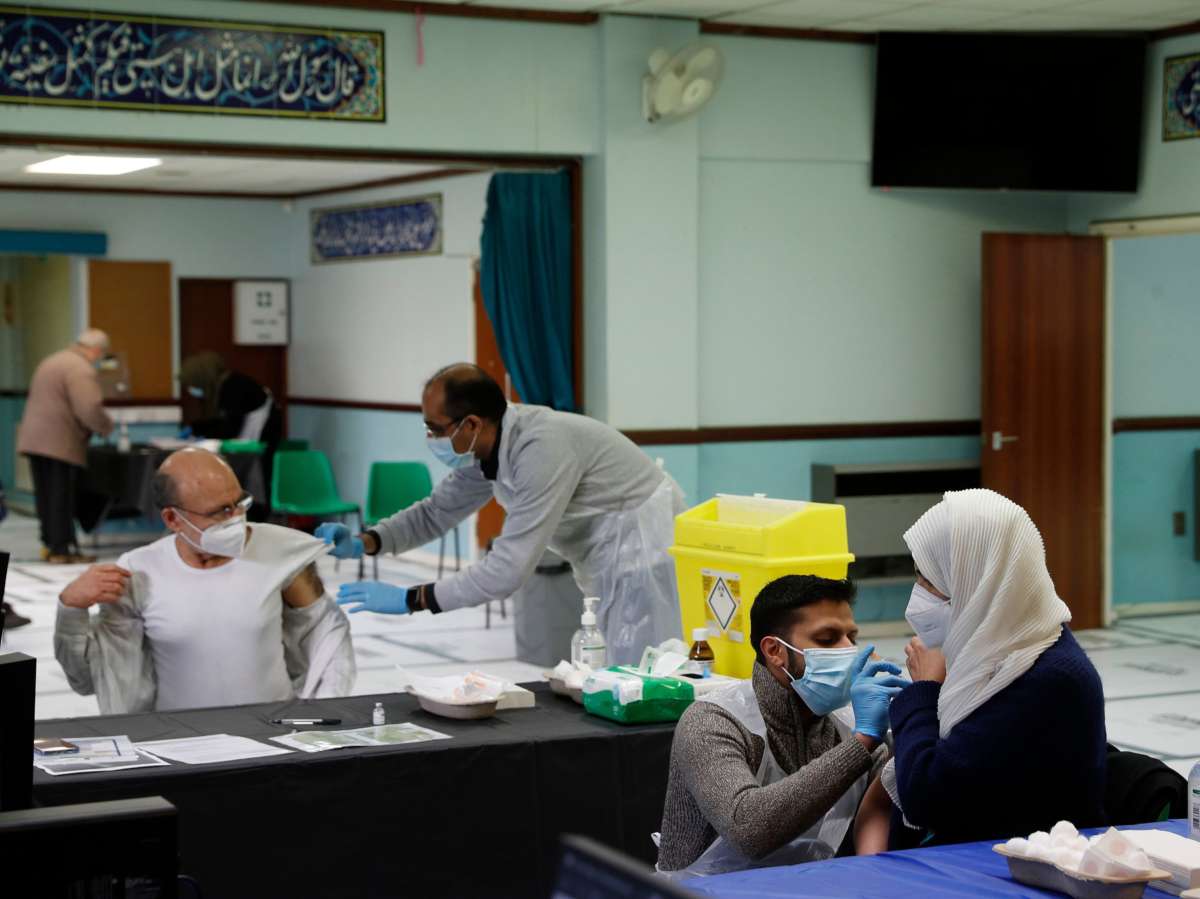 People receive the AstraZeneca COVID-19 vaccine at the Al-Abbas Islamic Center, converted into a vaccination clinic in Birmingham, England, in January. Sheikh Nuru Mohammed, the imam at the mosque, recognized many of his congregants were hesitant to get the "jab," as it's called, due to false rumors and distrust of government. So he began to fight disinformation during his sermons.
Image credit: Darren Staples

Editor’s note: The fight against disinformation has become a facet of nearly every story NPR international correspondents cover, from vaccine hesitancy to authoritarian governments spreading lies. This and other stories by NPR correspondents around the globe try to tease out how effective certain tactics have been at combating disinformation, and what lessons can be learned from other countries’ experiences.

BIRMINGHAM, England — Shenaz Sajan works as a caregiver in a hospice in this city, which made her eligible for the coronavirus vaccine soon after England’s National Health Service began rolling it out in December. When friends urged Sajan to get vaccinated, her response was unequivocal.

That’s because Sajan, who attends the Al-Abbas Islamic Center, a mosque in Birmingham, had read all kinds of false claims on the internet, such as the vaccine would damage people’s DNA or that it contained pork product, which Islam forbids.

At the time, Sajan was among 20% of Britons of South Asian descent who were either unwilling or unsure about taking the vaccine. The percentage of Black Britons was around 40%.

Overall, the vast majority of Britons were willing to take the vaccine, but leaders in Birmingham were especially concerned about these minority groups because they’ve been among the hardest hit by COVID-19.

Sheikh Nuru Mohammed, the imam at the Al-Abbas mosque, recognized a significant percentage of his congregants were hesitant to get the “jab,” as it’s called. So in December, he began to fight disinformation during his online Friday sermons — and, despite some misgivings in his congregation, even turned the mosque into a vaccination center.

It was the first of its kind in Britain and paved the way for dozens more.

Today, Sajan, 60, is fully vaccinated. Hundreds of thousands of U.K. citizens of South Asian descent and Black Britons have changed their minds, according to national surveys. Dr. Parth Patel, a physician and research fellow at University College London, believes local leadership like Mohammed’s has played a significant role in convincing more people to take vaccines.

“Using the mosque as a vaccination center, I think that’s really sort of a significant event,” says Patel, who has studied the survey data on vaccine hesitancy. “It’s about: Where is the message coming from? It’s about trust. Is it the government telling you to get a vaccine or is it the mosque up the road? That’s quite different.”

There are historical reasons why people of South Asian descent and Black Britons are more hesitant to get vaccinated compared with the U.K.’s white majority. Both minorities have faced racial prejudice and are more apt to distrust the system.

Murtaza Master, a pharmacist who attends the Al-Abbas mosque, says the history of using minorities for drug trials adds to people’s skepticism. Master cites the example of French scientists who called last year for first testing a tuberculosis vaccine in Africa to see if it would be effective against the coronavirus.

Master also says some minorities have been so frustrated with what they see as unequal treatment in the United Kingdom, it frames the way they perceive government in general.

British Prime Minister Boris Johnson has tried to counter disinformation, calling anti-vaccine arguments “total nonsense.” But Johnson has a big credibility problem. When the pandemic began last year, he initially downplayed it, joking about continuing to shake hands with people. By April, the prime minister was in an intensive care unit, fighting off COVID-19 himself. And Britain was headed toward the highest death toll in Europe.

“You lose confidence, don’t you, in the leaders,” Sajan says softly through a mask, sitting in the mosque’s sermon room, which has been covered with cardboard to protect the rug from all the new foot traffic. “So, you do then have to get your confidence back by listening to people who are close to you and who are concerned about you.”

Enter Mohammed. Originally from Ghana, the imam, known to his congregation as “Sheikh Nuru,” is a warm, charismatic preacher who has worked at the mosque for more than four years. As the government began rolling out the vaccine — first Pfizer, then AstraZeneca — congregants bombarded him with questions. They wanted to know if it was halal — lawful according to the teachings of Islam. Some wondered why they needed a vaccine since their lives were ultimately in the hands of God.

Mohammed drew on Islamic scripture for answers, emphasizing that good health is a gift from God. During his Friday sermons, he hammered away at disinformation.

“We should not allow conspiracy theories and fake news [to] control and manage us,” Mohammed said in a January sermon. “Let’s rely on the experts, not someone [who] throws something on Facebook … and let’s take advantage of this vaccine when the opportunities are given to us.”

But Mohammed’s most effective tactic may have been getting vaccinated himself.

He says close friends urged him to wait and see how it affected others, but he knew leading the way would have an impact. After his jab, congregants kept checking in on him, and — when nothing bad happened — his strategy paid off.

Instead of asking him questions about the vaccine, “Now you have people calling, [asking] when is our turn,” says Mohammed. “If you come early morning, it is packed.”

Sajan says the imam changed minds, including hers.

“I think the imam plays a very important role,” she says. “We see him three or four times a week, we have a lot of trust in him. And the fact that now the mosque has made itself a hub for the vaccination, I think it’s really, really incredible.”

Hundreds of the mosque’s congregants have received doses, and the mosque has delivered more than 15,000 doses to people in the area. A side benefit of the effort is that people in the community have gotten to know the mosque in a way they never would have otherwise.

“Some came and said … ‘For the first time, you have opened your doors to us. Thank you,'” Mohammed says. “So this really encouraged and we said, ‘We need to keep going.'”

Mohammed wasn’t the only reason people in this neighborhood warmed to the vaccine. Another is that they saw their friends and family receive the vaccine without any adverse effects.

Fahmida Begum says her mother, who arrived at her vaccine appointment at the mosque with the assistance of a cane, is a good example.

“At the beginning, she was very hesitant to have it,” Begum recalls as she helps her mother through the mosque’s parking lot. “But then, her sisters have had it. Other family members have had it. It’s just a bit of a confidence boost.”

Since the Al-Abbas mosque opened as a vaccination center, more than 50 other U.K. mosques around the country have offered vaccines onsite.

Qari Asim, who chairs Britain’s Mosques and Imams National Advisory Board, says that effort is helping to save lives.

“In some mosques, in one day, there are 150 people coming in who might not otherwise have come,” he says.

Britain’s experience over the last few months has provided valuable lessons about fighting disinformation surrounding vaccines: There is perhaps nothing more powerful than seeing the experience of a trusted leader or friend — and public opinion can change very fast.