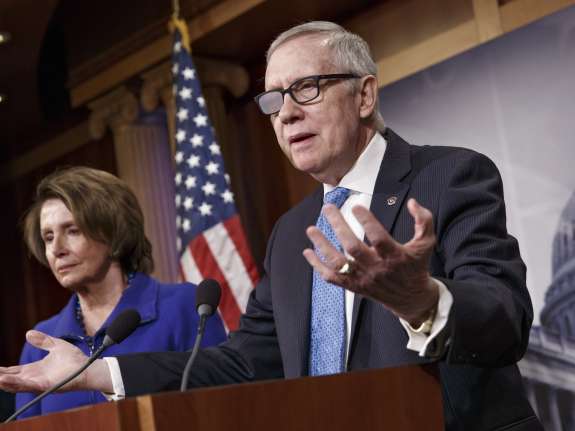 "It is a waste of time. We will not allow a conference to take place. It won't happen," Senate Democratic Leader Harry Reid said Thursday about the possibility of the two chambers reconciling Department of Homeland Security funding bills.
Image credit: J. Scott Applewhite

The Department of Homeland Security runs out of money at midnight Friday. The Senate is on track to pass a bill to fully fund DHS with no strings attached. Meanwhile, the House will be voting Friday on a stop-gap spending bill to fund the department for only three weeks. House Republicans say it’s to give the two chambers more time to work out differences. But Senate Democrats say that’s not going to happen.

For a few days now, most Senate Republicans have come to terms with how this story would end. The Department of Homeland Security would be fully funded because, as Sen. Mark Kirk of Illinois says, the burden of the majority is the burden of governing.

“As a governing party, we got to fund DHS, and say to the House, ‘Here’s a straw, so you can suck it up,'” said Kirk.

But the House isn’t quite ready to suck it up. By Thursday evening, leaders had hatched a new plan. To fund DHS for just three weeks, so the two chambers could reconcile differences between a bill that sticks it to the president’s executive action on immigration, and one that doesn’t.

“When you have two competing bills from both houses, the bicameral way to do it is by conference,” said House Republican Richard Nugent of Florida. “You know, no one’s going to get everything they want. But it is an ability to sit down and discuss those issues.”

The Senate’s Democratic leader — Harry Reid — says there is nothing to discuss.

“It is a waste of time. We will not allow a conference to take place. It won’t happen,” Reid had said earlier Thursday.

Senate Republicans have not yet said when — or even if — they’ll vote on what the House passes. So today, the two chambers will open on two separate tracks — with less than 24 hours to go.

House Speaker John Boehner says, what do you expect? The two houses are inherently different bodies.

“We have two different institutions that don’t have the same body temperature everyday. And so we try to work to narrow the differences. But sometimes there are differences,” ,” said Boehner. “You know, the House by nature and by design is a hell of a lot more rambunctious place than the Senate.”

But Democrats say it’s hard to believe three weeks is going make the House any less rambunctious or any more reasonable.