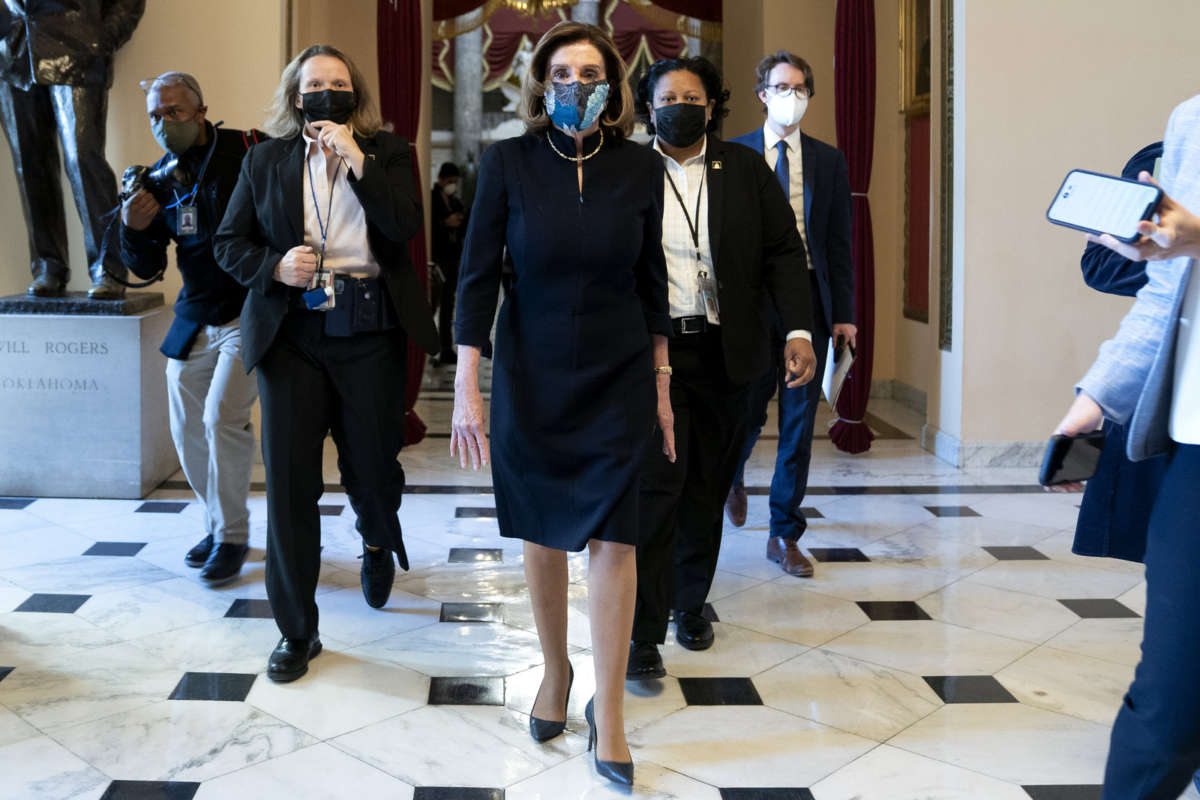 House Speaker Nancy Pelosi, D-Calif., said that impeaching President Trump is "a constitutional remedy that will ensure that the republic will be safe from this man." She's seen here walking to the House floor Wednesday ahead of the vote.
Image credit: Stefani Reynolds/Getty Images

The House of Representatives voted Wednesday to impeach President Trump for “high crimes and misdemeanors” — specifically, for inciting an insurrection against the federal government at the U.S. Capitol.

Just one week before he will leave office, Trump has now become the first U.S. president to be impeached twice.

Wednesday’s vote came a week after Trump supporters stormed the Capitol in a chaotic scene that left five people dead.

Ten Republicans broke party ranks to vote in favor of impeachment, including Rep. Liz Cheney of Wyoming, who chairs the House Republican Conference.

“None of this would have happened without the President,” Cheney said in a statement Tuesday explaining her vote. “The President could have immediately and forcefully intervened to stop the violence. He did not. There has never been a greater betrayal by a President of the United States of his office and his oath to the Constitution.”

The House voted 232-197 to impeach Trump, with four GOP abstentions, after a few hours of debate evenly divided between the parties. Because of the tight schedule, many lawmakers were only allotted a minute, or less, in which to state their positions.

The Democratic-led House approved the new rebuke in the same chamber where one week ago members of Congress fled rioters who had been stoked by the president and his false claims a bogus election process caused his defeat by President-elect Joe Biden.

Calling Jan. 6 “a day of fire that we all experienced,” House Speaker Nancy Pelosi, D-Calif., said it followed Trump’s sustained attempts to spread untruths about the 2020 vote and to influence state election officials to overturn results.

Impeachment, Pelosi said, is “a constitutional remedy that will ensure that the republic will be safe from this man, who is so resolutely determined to tear down the things that we hold dear, and that hold us together.”

In signing the article of impeachment on Wednesday evening, Pelosi called Trump “a clear and present danger to our country” and described her heart as “broken” over signing the second presidential impeachment in just over a year’s time.

“Today in a bipartisan way, the House demonstrated that no one is above the law, not even the president of the United States,” she said.

Many Republicans who voted against the measure criticized the impeachment process as rushed and counterproductive. But impeachment supporters said Trump’s attempt to derail Congress from certifying the election results spurred an act of domestic terrorism, making the president unfit for office.

In his remarks, House Minority Leader Kevin McCarthy, R-Calif., sought to strike a balance — between blaming Trump for his role in fanning the protest’s devolution into a riot, and speaking out against impeachment.

“The president bears responsibility for Wednesday’s attack on Congress by mob rioters,” McCarthy said. “He should have immediately denounced the mob when he saw what was unfolding.”

But McCarthy, who himself objected to certifying the Electoral College results, said that instead of impeaching Trump, Congress should form a fact-finding commission and consider a formal censure of the president.

As lawmakers debated impeachment, the White House issued a statement in which Trump called for calm. He did not refer to the House proceeding, but to new pro-Trump demonstrations that are planned to take place in the coming week.

In a video later posted to the White House’s official Twitter account, Trump described the Capitol insurrection as “mob violence” and said it “goes against everything I believe in and everything our movement stands for.”

Trump, even before agitating last week’s violent mob, has repeatedly endorsed violence — tacitly and explicitly — against those he views as opponents, including Black Lives Matter protesters and onetime political rival Hillary Clinton.

The Democratic-led House impeached Trump the first time in December 2019 for his role in the Ukraine affair. On Tuesday, the president called the move to impeach him again “ridiculous.”

If the Senate votes to convict Trump — an outcome that is far from certain — he likely would be barred from holding any federal office again. An impeachment trial will not begin before Biden is sworn in on Jan. 20. Senate Majority Leader Mitch McConnell’s office said Wednesday that the chamber, which Republicans currently hold, will not convene again until the transfer of power is complete.

The article of impeachment, set forth in House Resolution 24, states: