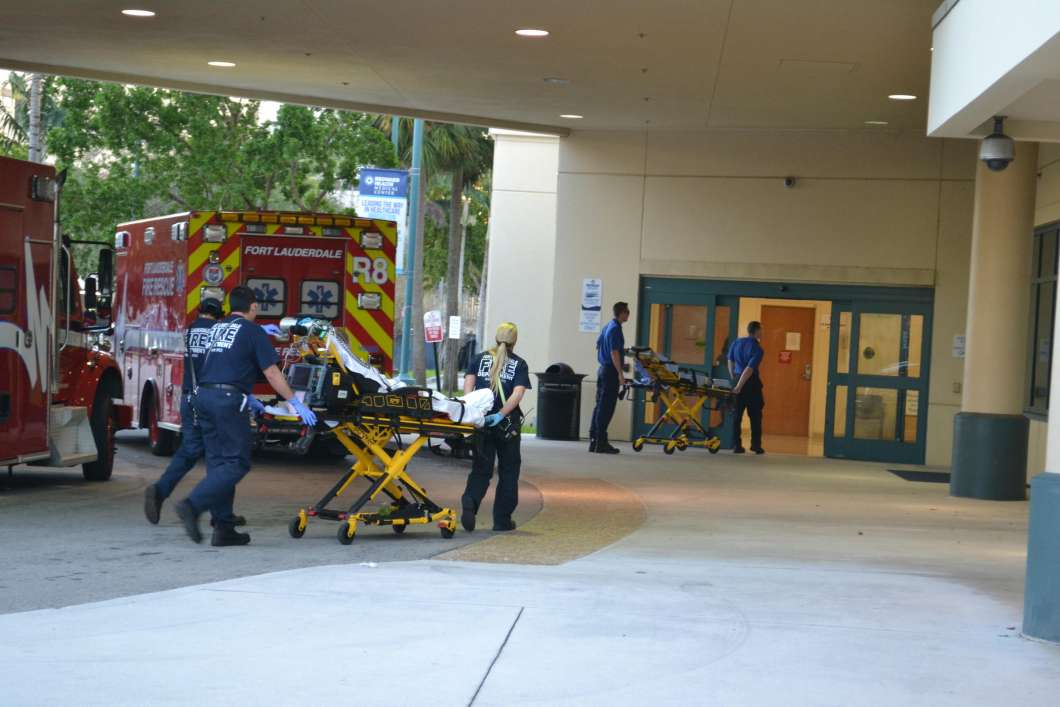 First responders transfer patients from ambulances to Broward Health Medical Center in Fort Lauderdale on the afternoon of Feb. 14. The hospital was on lockdown after receiving victims of the shooting at Marjory Stoneman Douglas High School. JESSICA BAKEMAN / WLRN

Since the shooting at Marjory Stoneman Douglas, school districts in South Florida have been grappling with how to keep campuses safe without creating too much stress or disruption for students. Hospitals have to try to strike that balance, too. Hospitals in Broward County had to make some tough calls during that crisis and the effects were felt beyond Parkland.

On the afternoon of February 14th, Fawn Patterson got a call from her daughter telling her to come to the hospital. When Patterson got to Broward Health Medical Center in Fort Lauderdale, a security guard was blocking the door.

“I have a daughter up there that’s seven months pregnant, bleeding, and I can’t get in to see her,” said Patterson.

She was one of dozens of people waiting for hours on the sidewalk outside the emergency room. The lockdown was a security measure, said Dr. Louis Yogel.

Both his hospital, and Broward Health North in Deerfield Beach, had gone into lockdowns after receiving victims of the shooting.  They’re both part of the same public system.

The people in charge of hospital security at Broward Health and elsewhere say a lockdown is standard and necessary to keep all patients safe when they’re treating victims of a violent incident.

“In a time of crisis like this, it’s better to have control,” said Yogel.

For people caught in the middle of the chaos, the lockdowns were distressing and they demonstrated the far-reaching ripple effects of a mass shooting on an entire community.

During the lockdown at the hospital in Fort Lauderdale, people crowded the entrance to the ER, trying to persuade security to let them in.  There was a woman trying to visit her friend who was dying of cancer. Another woman had a newborn son in the NIC-U who was breathing through a tube.

Fawn Patterson’s daughter, Amanda Ray Carrillo, was in a hospital room watching news of the shooting on TV with her husband, Roberto Gonzalez.  Gonzalez said he felt vulnerable with his pregnant wife and children at the hospital

“It was very scary, very traumatic,” He said. But the security did make him feel a little better. At one point, the couple heard that Nikolas Cruz, the shooter,  was being treated at that hospital. That turned out not to be true,  but at the time they were worried what might happen.

“You don’t know if, if somebody is going to come to the hospital to try to hurt that boy,” said Gonzalez.

That’s exactly the kind of thing hospitals are worried about.

He said, when a mass casualty incident is the result of violence, hospital administrators consider worst-case scenarios.

Like a shooting suspect coming to the hospital to further harm the victims. Someone trying to retaliate against the perpetrator, or dozens of people rushing the hospital in a panic.

Margeson calls it a proactive stance.

When there’s a crisis at one of Margeson’s hospitals, security guards patrol the entrances, questioning people about why they need to come in. If they aren’t seeking medical care they’re not high priority.

“Our first and foremost responsibility is treating the patients, and that overrides everything,” he said.

Fawn Patterson ended up going home on the night of the shooting without getting to see her daughter. But everything turned out okay for her family.

Carrillo was treated for the bleeding and released from the hospital the next day.

And on April 16th, she welcomed her fifth child Amaya Gonzalez.

Margeson, the security chief in Orlando, said preparing hospitals for potential problems after violent incidents is like seeing a tornado warning on TV and bringing your patio set inside.

“You may or may not suffer the consequences of the bad weather, and your furniture never would have been destroyed or flipped over or blown into the pool.”

But he said, it’s important to take precautions.